The book buzz this fall is all about the new novel from Marisha Pessl (Special Topics in Calamity Physics). When a famed but reclusive film director’s young daughter is found dead, the quick verdict is suicide. An investigative journalist begins to look into the matter, though, and soon finds himself trapped in a mystery reminiscent of the director’s many warped films. Think Twin Peaks meets X-Files and you have a good idea of the tone of this engrossing page-turner. 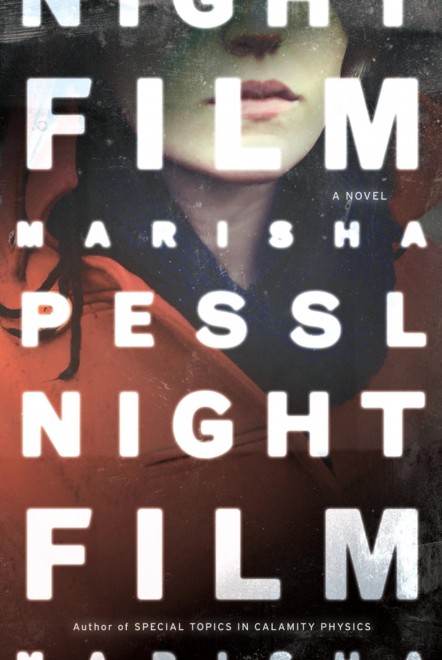 Everyone has a Cordova story, whether they like it or not.

Maybe your next-door neighbor found one of his movies in an old box in her attic and never entered a dark room alone again. Or your boyfriend bragged he’d discovered a contraband copy of At Night All Birds Are Black on the Internet and after watching refused to speak of it, as if it were a horrific ordeal he’d barely survived. Whatever your opinion of Cordova, however obsessed with his work or indifferent—he’s there to react against. He’s a crevice, a black hole, an unspecified danger, a relentless outbreak of the unknown in our overexposed world. He’s underground, looming unseen in the corners of the dark. He’s down under the railway bridge in the river with all the missing evidence, and the answers that will never see the light of day.

He’s a myth, a monster, a mortal man.

And yet I can’t help but believe when you need him the most, Cordova has a way of heading straight toward you, like a mysterious guest you notice across the room at a crowded party. In the blink of an eye, he’s right beside you by the fruit punch, staring back at you when you turn and casually ask the time.

My Cordova tale began for the second time on a rainy October night, when I was just another man running in circles, going nowhere as fast as I could. I was jogging around Central Park’s Reservoir after two a.m.—a risky habit I’d adopted during the past year when I was too strung out to sleep, hounded by an inertia I couldn’t explain, except for the vague understanding that the best part of my life was behind me, and the sense of possibility I’d once had so innately as a young man was now gone. It was cold and I was soaked. The gravel track was rutted with puddles, the black waters of the Reservoir cloaked in mist. It clogged the reeds along the bank and erased the outskirts of the park as if it were nothing but paper, the edges torn away. All I could see of the grand buildings along Fifth Avenue were a few gold lights burning through the gloom, reflecting on the water’s edge like dull coins tossed in. Every time I sprinted past one of the iron lampposts, my shadow surged past me, quickly grew faint, and then peeled off—as if it didn’t have the nerve to stay.

I was bypassing the South Gatehouse, starting my sixth lap, when I glanced over my shoulder and saw someone was behind me.

A woman was standing in front of a lamppost, her face in shadow, her red coat catching the light behind her, making a vivid red slice in the night.

A young woman out here alone? Was she crazy?

I turned back, faintly irritated by the girl’s naïveté—or recklessness, whatever it was that brought her out here. Women of Manhattan, mag- nificent as they were, they forgot sometimes they weren’t immortal. They could throw themselves like confetti into a fun-filled Friday night, with no thought as to what crack they fell into by Saturday.

The track straightened north, rain needling my face, the branches hanging low, forming a crude tunnel overhead. I veered past rows of benches and the curved bridge, mud splattering my shins.

But then—far ahead, a flicker of red. It vanished as soon as I saw it, then seconds later, I could make out a thin, dark silhouette walking slowly in front of me along the iron railing. She was wearing black boots, her dark hair hanging halfway down her back. I picked up my pace, deciding to pass her exactly when she was beside a lamppost so I could take a closer look and make sure she was all right.

As I neared, however, I had the marked feeling she wasn’t.

It was the sound of her footsteps, too heavy for such a slight person, the way she walked so stiffly, as if waiting for me. I suddenly had the feeling that as I passed she’d turn and I’d see her face was not young as I’d assumed, but old. The ravaged face of an old woman would stare back at me with hollowed eyes, a mouth like an ax gash in a tree.

She was just a few feet ahead now.

She was going to reach out, seize my arm, and her grip would be strong as a man’s, ice cold—

I ran past, but her head was lowered, hidden by her hair. When I turned again, she’d already stepped beyond the light and was little more than a faceless form cut out of the dark, her shoulders outlined in red.

I took off, taking a shortcut as the path twisted through the dense shrubbery, branches whipping my arms. I’ll stop and say something when I pass her again—tell her to go home.

But I logged another lap and there was no sign of her. I checked the hill leading down to the bridle paths.

Within minutes, I was approaching the North Gatehouse—a stone building beyond the reach of the lamps, soaked in darkness. I couldn’t make out much more than a flight of narrow stairs leading up to a rusted set of double doors, which were chained and locked, a sign posted beside them: keep out property of the city of new york.

As I neared, I realized in alarm, glancing up, that she was there, stand- ing on the landing, staring down at me. Or was she looking through me?

By the time her presence fully registered I’d already run blindly on. Yet what I’d glimpsed in that split second drifted in front of my eyes as if someone had taken a flash picture: tangled hair, that blood red coat decayed brown in the dark, a face so entirely in shadow it seemed possible it wasn’t even there.

Clearly I should’ve held off on that fourth scotch.

There was a time not too long ago when it took a little more to rattle me. Scott McGrath, a journalist who’d go to hell just to get Lucifer on the record, some blogger had once written. I’d taken it as a compliment.Prison inmates who’d tattooed their faces with shoe polish and their own piss, armed teenagers from Vigário Geral strung out on pedra, Medellin heavies who vacationed yearly at Rikers—none of it made me flinch. It was all just part of the scenery.

Now a woman in the dark was unnerving me. She had to be drunk. Or she’d popped too many Xanax. Or maybe this was some sick teenage dare—an Upper East Side mean girl had put her up to this. Unless it was all a calculated setup and her street-rat boyfriend was somewhere here, waiting to jump me.

If that was the idea, they’d be disappointed. I had no valuables on me except my keys, a switchblade, and my MetroCard, worth about eight bucks.

All right, maybe I was going through a rough patch, dry spell—what- ever the hell you wanted to call it. Maybe I hadn’t defended myself since—well, technically the late nineties. But you never forgot how to fight for your life. And it was never too late to remember, unless you were dead.

The night felt unnaturally silent, still. That mist—it had moved be- yond the water into the trees, overtaken the track like a sickness, an exhaust off something in the air here, something malignant.

Another minute and I was approaching the North Gatehouse. I shot past it, expecting to see her on the landing.

It was deserted. There was no sign of her anywhere.

Yet the longer I ran, the path unspooling like an underpass to some dark new dimension in front of me, the more I found the encounter unfinished, a song that had cut out on an expectant note, a film projec- tor sputtering to a halt seconds before a pivotal chase scene, the screen going white. I couldn’t shake the powerful feeling that she was very much here, hiding somewhere, watching me.

I swore I caught a whiff of perfume embroidered into the damp smells of mud and rain. I squinted into the shadows along the hill, ex- pecting, at any moment, the bright red cut of her coat. Maybe she’d be sitting on a bench or standing on the bridge. Had she come here to harm herself? What if she climbed up onto the railing, waiting, staring at me with a face drained of hope, before stepping off, falling to the road far below like a bag of stones?

Maybe I’d had a fifth scotch without realizing. Or this damned city had finally gotten to me. I took off down the steps, heading down East Drive and out onto Fifth Avenue, rounding the corner onto East Eighty-sixth Street, the rain turning into a downpour. I jogged three blocks, past the shuttered restaurants, bright lobbies with a couple of bored doormen staring out.

At the Lexington entrance to the subway, I heard the rumble of an approaching train. I sprinted down the next flight, swiping my Metro- Card through the turnstiles. A few people were waiting on the plat- form—a couple of teenagers, an elderly woman with a Bloomingdale’s bag.

The train careened into the station, screeching to a halt, and I stepped into an empty car.

“This is a Brooklyn-bound four express train. The next stop is Fifty- ninth Street.”

Shaking off the rain, I stared out at the deserted benches, an ad for a sci-fi action movie covered in graffiti. Someone had blinded the sprinting man on the poster, scribbling out his eyes with black marker.

The doors pounded closed. With a moan of brakes, the train began to pull away.

And then, suddenly, I was aware, coming slowly down the steps in the far corner—shiny black boots and red, a red coat. I realized, as she stepped lower and lower, soaked black hair like ink seeping over her shoulders, that it was she, the girl from the Reservoir, the ghost—what- ever the hell she was. But before I could comprehend this impossibility, before my mind could shout, She was coming for me, the train whipped into the tunnel, the windows went black, and I was left staring only at myself.

Excerpted from Night Film. Copyright © 2013 Wonderline Productions LLC. Published by Bond Street Books, a division of Random House of Canada Limited. Reproduced by arrangement with the Publisher. All rights reserved.