Why would a happily married man with a gorgeous, loving wife and beautiful son commit adultery? Find out in Charles Dubow’s sizzling debut novel, Indiscretion. 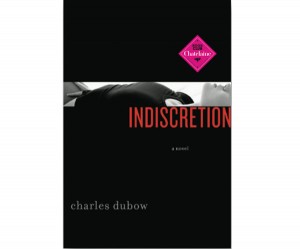 Why would a happily married man with a gorgeous, loving wife and beautiful son commit adultery? Find out in Charles Dubow’s sizzling debut novel, Indiscretion.

The house is charming. Lived in, loved. It’s small, two stories, the shingles brown with age, the trim white. Cars line the drive, some parked on the grass. A little boy, the son of the family, armed with a flashlight, helps direct them. Through the tall trees, an open field is barely visible in the twilight. The air smells of salt water, the sound of the ocean just audible. Claire wishes she could come back in the daylight. She can tell it would be marvelous.

Inside is the detritus of generations. Family treasures cover the wainscoted walls. It is as though the contents of several larger houses were spilled into one. Old portraits and photographs of men with moustaches and high collars, women with straw boaters and chignons, captains of industry, forgotten cousins; paintings of prized, long dead horses; posters; books everywhere, on shelves and stacked in piles on the floor; and model airplanes and Chinese porcelain foo dogs and old magazines and fishing rods and tennis racquets and beach umbrellas jammed in the corners. Overhead a dusty, oversize hurricane lamp bathes everything in a soft glow. Children’s toys, scratched tables and scuffed chairs and piles of canvas sneakers, moccasins, and rain boots. The whole place smells of years of mildew, the sea, and woodsmoke.

Claire is the last one in. The noise of the party pours out from other rooms. Clive puts his hand behind her back and brings her up to introduce her to a man with sandy hair. He is shaking hands with the rest of their group.

“It’s my lifeguard!” He is taller than she remembers. He wears an old blazer with a button missing and frayed cuffs. “Saved anyone tonight?”

“Just a few. They were dying of thirst.”

Claire giggles. “Clive, I met this man on the beach this afternoon. Apparently, I went swimming somewhere I shouldn’t have and could have drowned.”

“It was my good deed for the day, Clive,” the man says. “Good thing she’s a strong swimmer. I was afraid I was going to have to go in after her. Last year a teenage boy drowned there.”

“So you’re Harry Winslow?” Now she knows why he looked so familiar.

“I am. Who are you?” He smiles broadly. There is an old scar on his chin. His eyes are gray. A faint trace of wrinkles. He holds out his hand, the nails clean, the fingers tapered. Golden hairs curl around his thick brown wrist.

His hand envelops hers as she introduces herself, a little less confident now. She is surprised that it would be so callused. He is no longer the same man she met on the beach. He has taken on substance in her eyes.

“Well, Claire, welcome. What can I get you to drink?”

“Excuse me,” says Clive. “I see a chap over there. I’ll catch up later, hmm?” Without waiting for Claire to answer, he is gone, smelling money.

“How about that drink, then?”

Claire follows Harry inside a small living room with an old brick fireplace, painted white. She notices large, worn sofas and comfortable readings chairs. He walks to a table piled high with bottles, glasses, and an ice bucket. On the floor, a faded Oriental carpet. The rest of the party is on the porch and the grass out back. She accepts a glass of white wine. He is drinking whisky on the rockets from a chunky glass.

He is being modest. It is an act, she can tell. One he has repeated with varying degrees of sincerity. He has had this conversation before. Many people have read his book. It has won prizes. Thousands, maybe even millions of people have liked it, even loved it. The success for him is a shield, a gift. It lends him an enviable objectivity.

He smiles truthfully. It is like a parent hearing about the achievements of an accomplished child. It is no longer within his control. It has taken on a life of its own.

He looks around. He is the host. There are others to attend to, other drinks to fetch, introductions to be made, stories to be shared. But she wants him to stay. She tries to will him to stay. Wants to ask him questions, know more about him. What is it like to have your talents recognized, to have your photograph on the back of a book? To be lionized by friends and strangers, to have your face, your hands, your body, your life? But she cannot find the words and would be embarrassed if she did.

“Where are you from?” He sips his drink. He asks the way an uncle asks where a young niece is at school.

“Just outside of Boston.”

“Oh.” She blushes. “In New York. I’m sharing an apartment with a friend from college.”

“Ah,” he says. “He’s supposed to be very good at what he does. I must admit I don’t know the first thing about business. I’m hopeless with money. Always have been.”

Other guests come up. A handsome man and a beautiful woman with exotic looks and dark hair pulled tightly back. “Excuse us,” says the man. They know him. “Darling,” she says leaning in to offer him her cheek. “Great party. I wish we could stay. Sitter,” he explains. “You know what it’s like.”

They laugh with the intimacy of a private joke, the way rich people complain about how hard it is to find decent help or the expense of flying in a private plane.

The couple leaves. “Excuse me,” Harry says to her. “I need to fetch more ice. Enjoy the party.”

“I always do what the lifeguard tells me,” she says, making a mock salute but looking him in the eyes and holding his gaze.

He turns but then, as though realizing he is leaving her all alone, says, “Wait. You haven’t met Maddy. Let me introduce you. Come with me.”

Reprieved, she follows him happily through the crowd to the kitchen. Unlike the living room, it is bright. Copper pots hang from the walls. Children’s drawings decorate an aging refrigerator. A checked linoleum floor. There is a small, industrious crowd here, some sitting at a long, heavy table, others chopping, washing dishes. On a scarred butcher block table sits a large ham. It is an old kitchen. Worn and welcoming. She could imagine Thanksgivings here.

“Sweetheart,” he says. A woman stands up from the oven, taking out something that smells delicious.

She is wearing an apron and wipes her hands on it. She is taller than Claire and strikingly beautiful. Long red-gold ringlets still wet from the shower and pale blue eyes. No makeup. A patrician face.

“Maddy, this is a new friend of Clive’s.” He has forgotten her name.

“Claire,” she says, stepping forward. “Thank you for having me.”

Maddy takes her hand. A firm grip. Her nails are cut short and unpainted. Claire notices she is barefoot.

She is dazzling. Claire is reminded of Botticelli’s Venus.

“She liked my book,” he says. “Must be nice to the paying customers.”

“The world’s greatest wife,” he says with an ecstatic sigh.