In her debut novel, author Taylor Jenkins Reid tackles what happens when fate cuts short the course of true love soon after the “I dos.” 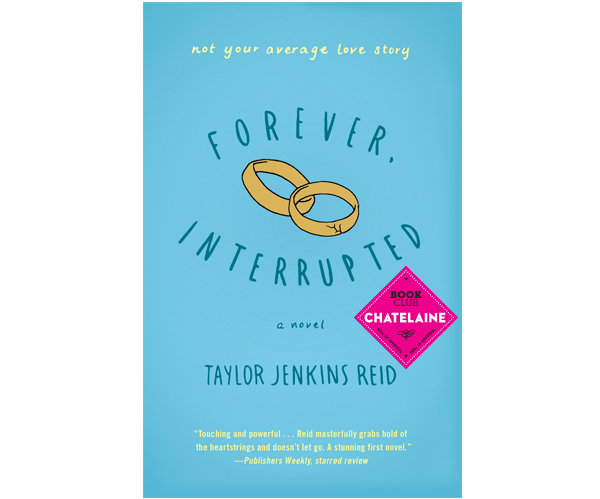 “Have you decided if you’re going to change your name?” Ben asks me. He is sitting on the opposite end of the couch, rubbing my feet. He looks so cute. How did I end up with someone so goddamn cute?

“Are you kidding?” he says. “I mean, you don’t have to. If you feel like it’s offensive or…I don’t know, if it negates your own name. I want you to have the name you want,” he says. “But if that name happens to be my name”—he blushes slightly—“that might be really cool.”

He seems too sexy to be a husband. You think of husbands as fat, balding men who take out the trash. But my husband is sexy. He’s young and he’s tall and he’s strong. He’s so perfect.

I sound like an idiot. But this is how it’s supposed to be, right? As a newlywed, I’m supposed to see him through these rose-colored glasses. “I was thinking of going by Elsie Porter Ross,” I say to him.

He stops rubbing my feet for a minute. “That’s really hot,” he says.

“I don’t know,” he says, starting to rub my feet again. “It’s probably some weird caveman thing. I just like the idea that we are the Rosses. We are Mr. and Mrs. Ross.”

“That settles it. As soon as the marriage certificate gets here, I’m sending it to the DMV or wherever you have to send it.”

“Awesome,” he says, taking his hands off of me. “Okay, Elsie Porter Ross. My turn.”

I grab his feet. It’s quiet for a while as I absentmindedly rub his toes through his socks. My mind wanders, and after some time, it lands on a startling realization: I am hungry.

“I really want to get Fruity Pebbles for some reason.”

“No, we do. I just . . . I want Fruity Pebbles.” We have adult cereals, boxes of brown shapes fortified with fiber.

“Well, should we go get some? I’m sure CVS is still open and I’m sure they sell Fruity Pebbles. Or, I could go get them for you.”

“That is lazy of you, but you’re my wife and I love you and I want you to have what you want.” He starts to get up.

“I’m going.” Ben leaves the room briefly and returns with his bike and shoes.

“Thank you!” I say, now lying across the sofa, taking up the space he just abandoned. Ben smiles at me as he opens the front door and walks his bike through it. I can hear him put the kickstand down and I know he will come back in to say good-bye.

“I love you, Elsie Porter Ross,” he says, and he bends down to the couch to kiss me. He is wearing a bike helmet and bike gloves. He grins at me. “I really love the sound of that.”

“You’re welcome. I love you! I’ll be right back.” He shuts the door behind him.

I lay my head back down and pick up a book, but I can’t concentrate. I miss him. Twenty minutes pass and I start to expect him home, but the door doesn’t open. I don’t hear anyone on the steps.

Once thirty minutes have passed, I call his cell phone. No answer. My mind starts to race with possibilities. They are all far-fetched and absurd. He met someone else. He stopped off at a strip club. I call him again as my brain starts to think of more realistic reasons for him to be late, reasons that are reasonable and thus far more terrifying. When he does not answer again, I get off the couch and walk outside.

I’m not sure what I expect to find, but I look up and down the street for any sign of him. Is it crazy to think he’s hurt? I can’t decide. I try to stay calm and tell myself that he must just be stuck in some sort of traffic jam that he can’t get out of, or maybe he’s run into an old friend. The minutes start to slow. They feel like hours. Each second passing is an insufferable period of time.

I can hear sirens heading in my direction. I can see their flashing lights just above the rooftops on my street. Their whooping alarms sound like they are calling to me. I can hear my name in their repetitive wailing: El-sie. El-sie.

I start running. By the time I get to the end of my street, I can feel just how cold the concrete is on the balls of my feet. My light sweatpants are no match for the wind, but I keep going until I find the source.

I see two ambulances and a fire truck. There are a few police cars barricading the area. I run as far into the fray as I can get before I stop myself. Someone is being lifted onto a stretcher. There’s a large moving truck flipped over on the side of the road. Its windows are smashed, glass surrounding it. I look closely at the truck, trying to figure out what happened. That’s when I see that it isn’t all glass. The road is covered in little specks of something else. I walk closer and I see one at my feet. It’s a Fruity Pebble. I scan the area for the one thing I pray not to see and I see it. Right in front of me—how could I have missed it?—halfway underneath the moving truck, is Ben’s bike. It’s bent and torn.

The world goes silent. The sirens stop. The city comes to a halt. My heart starts beating so quickly it hurts in my chest. I can feel the blood pulsing through my brain. It’s so hot out here. When did it get so hot outside? I can’t breathe. I don’t think I can breathe. I’m not breathing.

I don’t even realize I am running until I reach the ambulance doors. I start to pound on them. I jump up and down as I try to pound on the window that is too high above me to reach. As I do, all I hear is the sound of the Fruity Pebbles crunching beneath my feet. I grind them into the pavement each time I jump. I break them into a million pieces.

The ambulance pulls away. Is he in it? Is Ben in there? Are they keeping him alive? Is he okay? Is he bruised? Maybe he’s in the ambulance because protocol says they have to but he’s actually fine. Maybe he’s around here somewhere. Maybe the ambulance was holding the driver of the car. That guy has to be dead, right? No way that person survived. So Ben must be all right. That’s the karma of an accident: The bad guy dies, the good guy lives.