The creator of the funny CBC series Little Mosque on the Prairie talks about the Muslim community and how humour can bring people together. 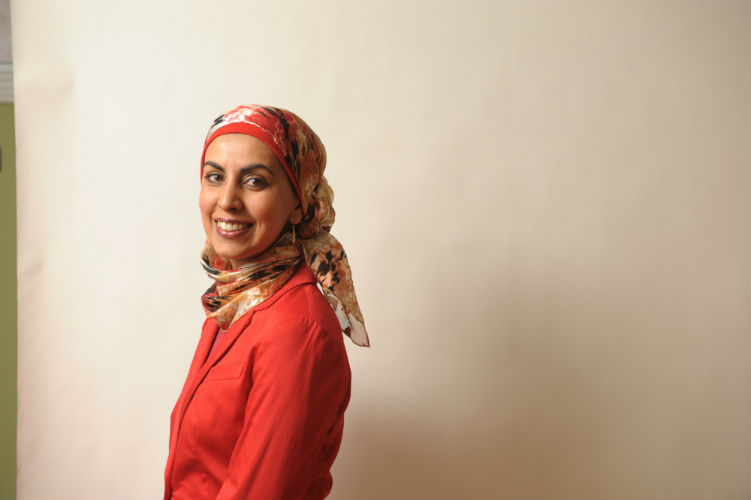 Why did you decide to write this book?

Two years ago, I was invited to speak at the Young President’s Organization in Toronto. I watched author Irshad Manji start yelling at Imam Abdul Rauf, the man caught up in the controversy of the Park 51 mosque in Lower Manhattan [near the site of Ground Zero]. The whole thing disintegrated into a screaming match. I had to speak after that. I was wearing a wrap-around shirt that came loose and almost opened during my talk, so I made a crack that if I accidently exposed myself, it wasn’t a new form of Islamic terrorism. Everyone relaxed. I felt bullying one another wasn’t the answer when it came to dealing with our differences. At that moment, I decided to write a book that would help create understanding between all of us.

What have been the responses to the book so far?

So far only my kids have seen the galley. They’re thrilled the book is finally done. They’d monitor me at my computer and check my browser history to see how much on-line shopping I was doing versus writing the book.

You named of your company, FUNdamentalist Films, and you’ve referred to your film work as “terrodies,” or comedies about terrorist themes. Why do you think humour is the best way to address serious issues?

To be honest, I’m a little embarrassed I came up with the word terrodies. It was pre-9/11 when I made my short films BBQ Muslims and Death Threat. I thought it was hysterical, but now I’m not so sure. My brain twists things into absurdities, and the more serious the situation, the kookier I get. I had to give the Lieutenant Governor’s Prayer Breakfast in Saskatchewan, and I couldn’t stop making jokes about sex. But I do believe humour helps people connect better because they don’t feel they’re being lectured to; they feel they’re being entertained and so are willing to listen to your point of view.

In your book, you cover the Muslim pilgrimage of hajj and the separation of men and women in mosques to finding a husband and bathroom habits with a sense of humour. It seems to me, though, that nothing you’ve chosen to cover is actually just for “fun.”

I think what comes through in the book is that faith is a very important part of my life and runs through every decision, even hair removal! You can’t belong to a religion where you pray five times a day and not be in constant communication with God.

Was there any topic you decided to leave out?

Our sex life is off the table when it comes to my writing. I promised my husband I wouldn’t write about it, because he’s very private. He’s been so supportive of my career, I feel I can’t break that promise. So you have to read between the lines (hint: the chapter on hajj). I think he’s secretly hoping Fox News will link me to al-Qaeda so I’ll be blacklisted and never published again and he can rest easy at night.

You say many of your interactions in your community end up “going sideways.”

I thought my community would be thrilled with Little Mosque on the Prairie. After all, it has the same sensibility of The Waltons. Instead, the conservative element went completely haywire. There was too much kissing and touching and making fun of religion. It took me a long time to understand where all the anger was coming from. It was a shock to the community to see their world in a comedic light. I think there’s a difference between how Muslims growing up here in North America view the mosque versus people who come from Muslim countries. For me, it’s supposed to be a human-friendly space for everyone, and it was in the 7th century when Islam came into being. Over time, patriarchy eroded a lot of the female friendliness of the community. So when I bring that attitude back into the community, there’s resistance because it’s not what people are used to.

You distinguish between culture and religion in your book. Why is that important?

There’s a lot of confusion between culture and religion for some Muslims who come from South Asian and Arab countries. “What do you mean women can go to the mosque, and speak up in the congregation and argue with the imam?
When you grow up in North America, you grow up with a faith based on intellectual engagement. We think, we ask questions, we grow up with different opinions of religion than our parents. Religion for us means abiding by the principles of our faith and being in harmony with North American culture where equality between men and women is second nature.

I want to emphasize that there is no monolithic Muslim culture. Every Muslim country is different, depending on its history.

In one interview, you said your reasons for wearing the hijab have changed over time. Why did you start wearing it and why do you wear it now?

When I was young, I believed that hijab was a black-and-white issue: Hair has to be covered, end of story. As you get older, you start seeing the shades of grey. I wear a hijab today as a statement of identity, more than a declaration of modesty, because I already dress modestly. Modesty is a basic value in Islam for both men and women, but how you define that modesty is also a product of the environment you’re in. I have four kids, two boys and two girls. I expect all four dress modestly. I’ve told my daughters that uncovered hair doesn’t necessarily mean you’re immodest. One of my daughters chooses to wear the hijab; one doesn’t. I’m fine with both decisions because they made them out of free will, which is their right.

To say all women who wear hijab are brainwashed is wrong. That’s like saying all women who wear high heels want to objectify themselves. Patriarchy tells women you’re not intelligent enough to make your own choices, we’ll make them for you. We have to be careful when we tell Muslim women, we think you shouldn’t wear hijab and now we’re going to punish you for wearing it.

What difficulties have you encountered as a result of your work?

For the right wing, it’s important that Islam never be seen as a faith that’s compatible with North American values. We must always be considered “the other.” So I’m seen as someone who’s trying to whitewash Muslims and pretend everything is OK. “Get the white people to trust Muslims, so they can kill us in our sleep.” And right wing Muslims feel I’m trying to dilute their version of the faith, because I bring up the gender issues in the community.

What do you say to critics of your satirical approach?

When Muslims get mad at me for exposing the dumb things that they do, I tell them, if you stop doing those things, I’ll stop exposing them.

And to people who claim they feel threatened by Muslims and Islam? Or any religion other than their own, for that matter?

They should go out and meet people. Fears are based on one-dimensional image of Muslims in the media. We’re not as scary as you might think. We don’t drink alcohol, we don’t eat pork, we don’t go to clubs, we pray a lot. We’re actually kind of boring. That should be our slogan: “We’re Muslim, and we’re boring.”

What is the most serious challenge facing the world today in your view?

What’s next for you?

One of the writers for Little Mosque told me I was the biggest pervert in the room. I couldn’t use some of my story ideas because they were too racy. So I’d love to do a romantic comedy. And I think that my next project cannot have the word mosque in it.

Read the review for Laughing All the Way to the Mosque.