Between 1993 and 1997, pop music was dominated by four Canadian women. A new book gives them the credit they deserve.

When it comes to record sales in Canada, Celine Dion, Sarah McLachlan, Shania Twain and Alanis Morissette are more successful than Nickelback, Michael Jackson and even the Beatles. But for many that’s not exactly a source of pride. In fact, the contributions these four women have made to Canadian music — and to pop music as a whole — are often dismissed. Despite dominating the airwaves from 1993 to 1997, they were, and remain, the butt of endless jokes: a sentimental heart-thumping diva, a pop-country tart, a disco queen turned angry young woman and a lame folksy girl with a guitar. In We Oughta Know: How Four Women Ruled the ’90s and Changed Canadian Music, Vancouver writer Andrea Warner gives these artists and their phenomenal success its due, shedding light on the vitriolic sexism Celine, Sarah, Shania and Alanis brought out in people — including herself as a teenager — and how they will eventually have the last laugh.

Why don’t Canadians give these four artists more credit for their success?

We let ourselves believe they were something to be ashamed of, cheesy and somewhat of an anomaly. But maybe everyone is like me and needs 15 to 20 years to [appreciate them]. And hopefully we can do better with future talents.

What makes them such easy targets?

Partly the earnestness in the music, that’s certainly the case for Celine. And there was a vulnerability in the music Alanis was making. For Shania, it was the performative aspect, the clothes and all the stuff that was outer facing. They were all so young when they became hugely successful and people minimize youthful voices: “Alanis is only 19 what does she know about scorn and hurt and psychological damage?”

These women are very different musicians. Did they have anything in common?

All four really were articulating their own experiences, their own desires, saying what they needed, what they wanted — even if it was [Celine’s] slightly insipid version of forever love.

Are there any other female Canadian artists who deserve more recognition?

We think of Joni Mitchell and Buffy Sainte-Marie as these two Canadian women who made everything happen. Rita MacNeil doesn’t get a lot of credit, and she was an incredible early feminist icon. Anne Murray, too. Obviously men still dominated the music industry, but I do think there was a lot of power in the women who paved the way for that particular moment in the ’90s.

It was commonplace to treat them terribly. Some of these women were writing about sexual assault, and it blows my mind that there were male and female journalists throwing up their hands saying, “These whiners — why don’t they deal with it better?” And there was a culture in the ’90s where it was cool to tear people down. It was not cool to like stuff. Alanis was deemed inauthentic, a construction of the label and Madonna [who signed her]. Celine and Shania were considered puppets of their industry husbands. And Sarah was merely a “girl with a guitar,” which was a pejorative statement back in the day.

Are you surprised by what any of them are doing now?

Shania’s arc has been really interesting. She was huge for 10 years, after hustling really hard her whole life. Then after 10 years of super stardom, she said, “I’m good. I’m done.” How badass is that? In a way, all four opted out. They haven’t been forced out. They put out records when they want. They tour when they want.

Fifty years from now, what will be their legacy? 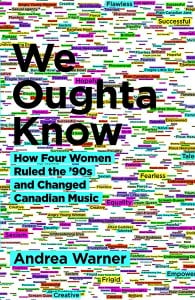 I think Celine will definitely go down as one of the iconic pop voices of our lifetime. I think Sarah will always be remembered for Lilith Fair and what that did at the time and the conversations that it started. Is Alanis ever going to do anything that’s as earth shattering as Jagged Little Pill? I have no idea, but I believe young kids will continue to rediscover that album and it’ll feel pretty powerful — it’ll hold up. I wouldn’t be surprised if Shania, who’s doing a farewell tour, pops up every 10 years or so, similar to Cher or Bette Midler. She doesn’t have anything left to prove.