A Q&A with Ami McKay, author of The Virgin Cure

Ami McKay chats with us about her writing process, the research that went into The Virgin Cure, what she loves — and hates — about writing and even reveals some details about what she's working on now (if you loved The Virgin Cure, you will be thrilled!) 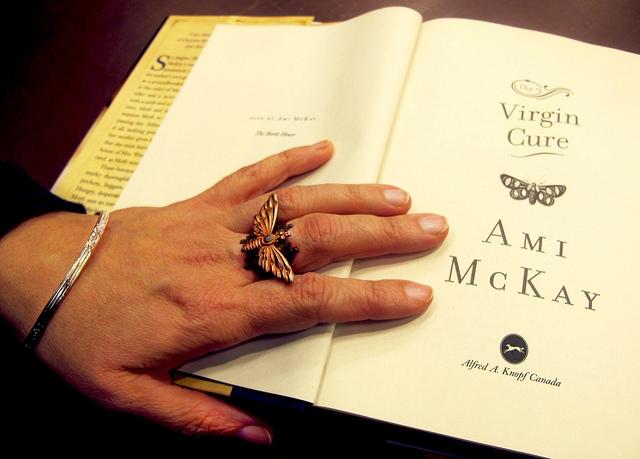 Ami McKay chats with us about her writing process, the research that went into The Virgin Cure, what she loves — and hates — about writing and even reveals some details about what she’s working on now.

Q: How much research did you do on this book and what kind?
A: I spent a couple of years researching the era, history and setting of The Virgin Cure. What initially began as an effort to find out more about the life of my great-great grandmother (the character of “Dr. Sadie” is based on her) eventually grew into a full-on chase to gather up enough material to write the novel. I touched on many kinds of research in the process – everything from basic Google searches to digging through libraries and archives for historical sources and census records.

Q: Were you surprised by anything you learned?
A: The most surprising (and heartbreaking) thing I found wound up becoming the heart of the story and the title of the novel. The myth of “the virgin cure” — the terrible belief that a man can be cured of disease by having sex with a virgin — was so shocking to me that I knew I needed to address it and bring it to light. Sadly, the myth still exists today in various pockets of the world.

Q: Do you do all the research and then all the writing? Or how do you work?
A: I try to do as much research as I can before I start to write. Inevitably there’s some overlap between two, but I like to get my research out of the way so the story can take over and I can just live in the world of the book until it’s finished.

Q: How do you not get bogged down by the research and, therefore, not let the research bog the story down?
A: By allowing the story and the characters take the lead in my writing, the historical details tend to stay in a supporting role, where they belong. If I stay true to the characters and put their lives and stories front and centre, then the extraneous bits of research (as wonderful as they might be) fall away and are often put in a file for another novel.

Q: How did you decide what pieces of the story to tell as the narrator and which as newspaper articles, announcements and asides?
A: The different threads of the story became quite clear to me once I settled on Moth as the narrator. Dr. Sadie’s journal entries and asides were my way of bringing her voice into the novel without overshadowing Moth. I thought of her notes as a kind of chorus that was there to comment on and inform Moth’s tale. The newspaper articles and advertisements were my way of giving New York and the era a voice as well.

Q: Where did the name Moth come from? Is the ring you were wearing at Read for the Cure a moth? Did you get it after or before the novel?
A: I stole the name from Shakespeare. I love it because it reminds me that we usually think of butterflies as the beauties of the insect world and never give moths their due. We never notice moths until they are drawn to the light. Although they linger in the shadows, they are amazingly beautiful as well. My husband, Ian, gave me a gorgeous moth ring for Christmas last year to commemorate my journey in writing The Virgin Cure. It was made by Niffer Desmond, who has a fabulous steampunk inspired jewelry shop on Etsy called “19 Moons.” I wore it throughout my tour, and I swear it brought me good luck!

Q: We know Dr. Sadie was inspired by a real person; was anyone else in the novel?
A: A minor character in The Virgin Cure, Mrs. Birnbaum, was based on a real life “fence” from 19th-century New York named Fredericka Mandelbaum. She’ll also be appearing in my next novel in a much larger role.

Q: Are parts of you ever in your characters? If so, who?
A: I try to stay out of my characters’ way most of the time, but I suppose there’s a bit of myself in Dr. Sadie. I gave her many of the same traits my great-great grandmother had, and a few of those in turn were traits that have been passed down to me. I like to think I share her sense of commitment to those around us who are in need, as well as her ability to live and think “outside the box.”

Q: What is your favourite thing about writing and the thing you hate?
A: I quite enjoy infusing a story and/or a scene with a bit of magic and folklore. It’s so much fun! I have a hard time writing scenes where bad things happen to good characters. I often have to steel myself up for the task, making notes the night before, knowing that tomorrow will be the day I have to write about whatever it is I’ve been dreading. Usually, if I don’t want to kick a door open, then that’s exactly what I need to do.

Q: Have you always been a storyteller?
A: Oh, gosh, yes! Countless glasses of milk were spilled by my hands when I was a child as I told wild, lavish stories at the dinner table. I owe my siblings and my parents a million thanks for their patience.

Q: Where do you do your writing? Set the scene for us.
A: My writing studio is a finished space in the loft of a barn on the back of our property. It’s painted the colour of tangerines with a skylight and large picture windows that look out on the Bay of Fundy. My desk is a Victorian pump organ that once belonged to my great aunt. When it fell into disrepair, my husband took out the keyboard and stops and converted it into a desk for me. I write everything first by hand and then type it into my laptop for editing. The pedals of the organ still work, so I’ll often pump away as I write.

Q: What are your fave books?/Who are your fave authors?
A: Toni Morrison’s The Bluest Eye. Charles Dickens’s Great Expectations. Edith Wharton’s The House of Mirth. Carol Shields’ The Stone Diaries.

Q: What are you working on now? Details??!
A: The second novel in a New York trilogy. It’s called The Witches of New York. (Yes, Moth returns.)

Q: Do you think you’ll ever write a novel set in modern times?
A: Never say never.

Q: If you could be anything in the world, except a writer, what would you be?
A: A music therapist or a genetic counselor.

Q: Fave TV shows?
A: Right now, thanks to my husband, I’m totally hooked on Time Team, a show that follows an archeological team on digs around the UK. (Of course, this is just to keep me distracted while I wait for the Dr. Who Christmas Special. I’m a devoted Whovian through and through.)

Q: Hobbies?
A: In the spring and summer, I have an organic garden that I love to putter around in. In fall and winter, I bake a lot of bread.

Q: Describe a perfect day.
A: No alarm. No place to go. Me, hubby, boys and dog at home, doing whatever makes us happy.