This researcher set out to prove blondes aren't dumb 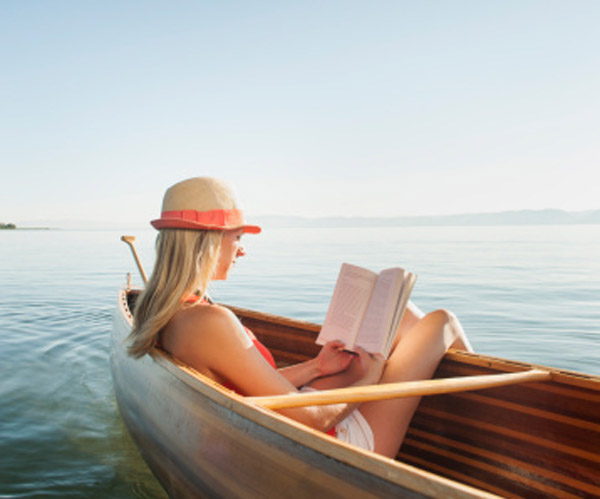 What do you get when you cross an economist with 597 blonde women and a national longitudinal survey? Sadly, this isn’t a joke — it’s a real study published in the Economics Bulletin journal last month.

Blonde women in particular have been the butt of many punchlines, stereotypes and movie plots for decades. So prevalent is the stereotype that one American academic, Jay Zagorsky, thought it warranted an investigation. Being an economist, his next logical step, of course, was to employ the power of science to find out if natural hair colour had any bearing on intelligence. And so he published a paper entitled, “Are blondes really dumb?” with data collected from nearly 3,000 women.

“The answer to the question is important. Discrimination is a reality in today’s world,” writes Zagorsky, researcher from Ohio State University. While we’d venture to say blondes aren’t exactly the most marginalized demographic in today’s world, discrimination certainly exists in many other forms.

Zagorsky’s study used existing data from the 1979 National Longitudinal Survey, a program funded by the U.S. government. It looks at people who were between 14 and 21 years old at the time. Since 1979, the same group of people have been periodically interviewed — as of this study, 26 times. The survey collects height, weight and hair colour, as well as a series of Pentagon-approved intelligence tests. Respondents were subjected to questions on 10 subjects: general science, arithmetic reasoning, word knowledge, paragraph comprehension, numerical operations, coding speed, auto and shop information, math knowledge, mechanical comprehension and electronics knowledge.

Combining IQ information with hair colour, Zagorsky found that the average IQ of blonde women was slightly higher than that of brunettes, redheads and black-haired women, but the results are not considered statistically significant. While hair colour has no direct effect on a person’s upbringing, Zagorsky noted “the results show that white blonde women grew up in homes with more reading material than those with other hair colour.”

Blonde men had an average IQ slightly lower than that of brown-haired men. One major caveat: Zagorsky excluded Hispanics and African-Americans “to eliminate any bias caused by ethnic and racial differences.” He did include Asians in the analysis since they made up an “insignificant share,” lumping them under “white” in the table below. 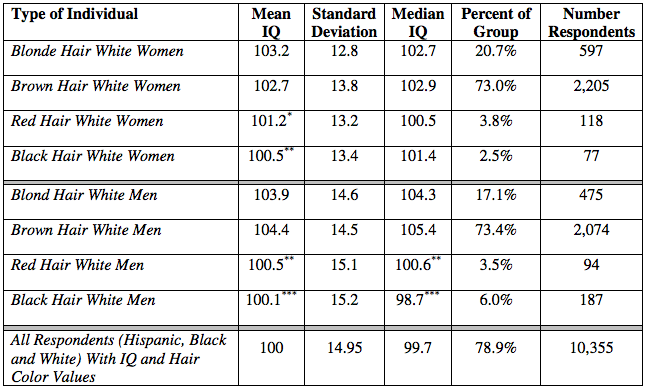 Like many studies, this is simply another case of correlation, not causation. The author writes, “if this long-standing belief is wrong, how many other commonly held prejudices are also erroneous? How many seemingly harmless prejudices are actually damaging?” While his conceptual framework may be dubious, it will be interesting to see which marginalized group Zagorsky goes to bat for next.

Related:
How to go from brunette to blonde: Do’s and don’ts from a pro
Why there are still far too few women in science and engineering
When it comes to women in media, let’s #AskHerMore