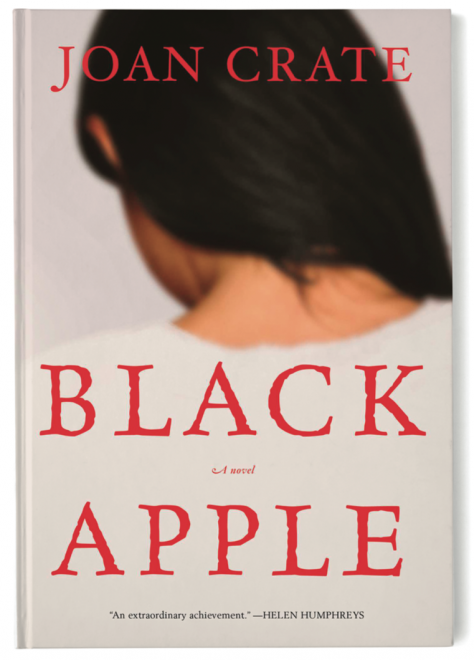 During its six-year term, which ended last summer, the Truth and Reconciliation Commission of Canada listened to and recorded thousands of first-hand accounts from survivors of Canada’s Indian Residential Schools; that’s thousands of stories of deprivation and destruction, of broken families and lost cultures. In her latest novel, Black Apple, Calgary poet and author Joan Crate takes a compelling and clear-eyed look at this history, setting her coming-of-age tale at a fictionalized institution in the Prairies during the 1940s and ’50s.

Sinopaki, a young Blackfoot girl, is sent to the grim St. Mark’s Residential School for Girls by decree, dragged from the arms of her parents by government agents. Within hours of her arrival, she is stripped of her clothes, her hair and her name. Christened Rose Marie by Mother Grace, the formidable nun who runs the school, she soon establishes a mini resistance movement with her friend Anataki (renamed Anne), swapping stories of life back home and sneaking contraband bannock into the school after summer vacation. There are consequences of her behaviour: A zealous nun beats Rose Marie until she is nearly unrecognizable beneath the bruises. But even more crushing  is the joyless grind of daily life at St. Mark’s, where there is never enough coal, medicine, food or blankets and where Rose Marie aches from being trapped indoors and away from the land that once nourished her.

Related: What we need to learn from the life and death of Tina Fontaine

Rose Marie’s arrival coincides with the faltering faith of Mother Grace. Aging and regretful, she has become doubtful of her mission at the school and barely capable of managing the nuns and students in her charge. Rose Marie’s intellect and wilfulness at once frustrate and fascinate Mother Grace, and she is further drawn to the girl when Rose Marie confesses that she’s haunted by recurring dreams of long-ago crimes at St. Mark’s. (This is, after all, a school sitting alongside a cemetery filled with the bodies of former students.) Mother Grace, distressed by her own memories of these past events and “her jaw sore with all the tongue-holding she’d been doing for the past four decades,” seizes upon the visions as a kind of miracle. Blinded by her own need for redemption, she pulls Rose Marie closer to her and the church, while driving the girl farther from her family and the culture she yearns for.

Crate, who is of indigenous heritage, writes in an author’s note that she wanted to use the residential school experience to “show the many sides of human behaviour.” She powerfully reveals the mechanics of forced assimilation through the nuns and priests — some sadistic and merciless, others weak and misguided — who carried out the government policy to “kill the Indian in the child.” Crate doesn’t shrink from the abuses of the residential school system, but she extends her curiosity to both the victims and the perpetrators. What must it take to survive such suffering, she wonders, and what must it take to cause it.

In The High Mountains of Portugal, Yann Martel follows three very different men gone wild with grief
Tension between mother and daughter central to My Name is Lucy Barton
City on Fire explores the dark streets of 1970s New York