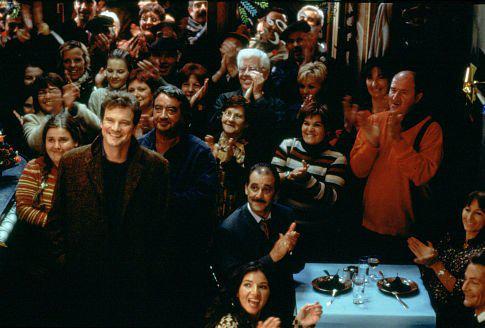 From the film Love Actually

Holiday romance movies are a great way to get into the festive spirit while spending time with the one you love. Four Christmases stars the unlikely pair of Oscar-winner Reese Witherspoon and stream of consciousness comedian Vince Vaughan as a couple dealing with the multiple Christmas celebrations that arise from having two sets of divorced parents. But there’s no need to hit the cineplex. Pop in one of these five holiday romances and enjoy a cozy night in.

The Family Stone (2005)
This was Sarah Jessica Parker’s first movie role post-Sex and the City and, surprise, she doesn’t play a Carrie Bradshaw type. Meredith Morton is a tightly wound career woman meeting her boyfriend Everett’s (Dermot Mulroney, always good playing the romantic lead) liberal, intellectual family for the first time during Christmas. While it’s not all light romance, The Family Stone gets mention for its warm family dynamic and stand out performances by Diane Keaton and Rachel McAdams as Everett’s reluctant mother and sister. Claire Danes, Luke Wilson and Craig T. Nelson round out the talented cast.

The Holiday (2006)
Cameron Diaz and Kate Winslet star as Amanda and Iris: two women sick of love who trade houses between Los Angeles and the English countryside for Christmas. Jude Law adds charm and Jack Black brings the funny as their respective love interests and writer/director Nancy Meyers (Something’s Gotta Give) is a proven talent at smart romantic comedies with goofball charm.

Love Actually (2003)
If you haven’t seen this massive cast holiday romance yet, don’t worry, it’s fast becoming a TV season staple. Hugh Grant as a Pointer Sisters-dancing, lovestruck prime minister of England? Why not? The multiple intersecting story lines lead to romance, good and bad, and first-time director Richard Curtis, who wrote Four Weddings and A Funeral, brings humour and heart to the screen with plenty of Oscar winners and nominees on board (Keira Knightley, Emma Thompson, Liam Neeson, Laura Linney).

While You Were Sleeping (1995)
Lucy, played by Sandra Bullock in one of her earliest romantic comedies, is a lonely subway ticket collector crushing on a handsome stranger played, mostly in a hospital bed, by The O.C.’s Peter Gallagher. Lucy saves his life, he ends up in a coma just before Christmas and everyone, including his loving, noisy family, mistakenly believes they are engaged. Lucy tries to keep her secret while trying not to fall for her supposed future brother-in-law, played by Bill Pullman. While You Were Sleeping is sweet and charming, thanks to Bullock’s pratfalls and endearing grace, and is on its way to becoming a holiday favourite.

White Christmas (1954)
What would a holiday romance list be without one of the best? White Christmas tells the story of old Army buddies played by Bing Crosby and Danny Kaye who put on a show to save their former general’s country retreat. They fall for singing sisters played by Rosemary Clooney and Vera-Ellen and a classic musical is born. With memorable songs like “Sister,” “Snow” and of course, “White Christmas,” this is a holiday ritual that bears repeating.