Being gleeful with Jessalyn Gilsig

She may play a conniving wife on the hit TV show Glee, but in person, this Canadian actress sings another tune 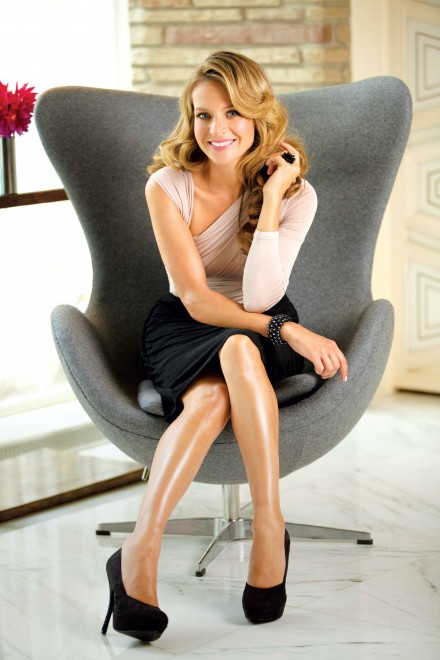 Jessalyn Gilsig is a Gleek. And not just because she plays Glee’s Terri Schuester, the cantankerous (and slightly delusional) ex-wife of the glee club’s beloved coach, Will Schuester. The 39-year-old Montreal native is a genuine fan of the phenomenon that shot to the top of TV Land’s must-see list last season, and she doesn’t miss an episode. (The show airs Tuesdays on Global TV.)

“I always cry when the kids sing,” Jessalyn says, on the set of Chatelaine’s New Year’s Eve shoot in a lavish 1950s-era mansion in Toronto. “You think you’ve seen the depths of their talent and then they show you something you didn’t know they could do. I love that the show is about feeling like an outcast, about how we’re not comfortable in our own skins, except for a few moments in life when you feel like you’re doing what you’re supposed to be doing.”

It’s no surprise that Jessalyn identifies with the teenagers who are just trying to make it to class without being “slushied.” Jessalyn, mother of four-year-old Penelope, wasn’t the kid who declared “actor” when asked what she wanted to be when she grew up; she would have told you she wanted to be a painter, and she even studied art at Dawson College after high school. “I always thought I would supplement my painting career by acting. Brilliant plan,” she says with a selfdeprecating eye roll. “Then I started acting more than painting, so now I support my painting habit by acting.” After graduating, Jessalyn was invited to join the prestigious American Repertory Theatre at Harvard University — the event that she considers her first big break. “It was really unexpected, and it was the first time I was offered a legitimate job as an actor.” Jessalyn’s CV now boasts a list of shows that sounds like the winners’ circle at the Emmys — The Practice, Boston Public and Nip/Tuck, where she played sex addict Gina, the part she credits with preparing her for her role on Glee. “Playing Gina made me fearless.

I think when you’re coming up as an actor, especially as an ingénue, it’s all about likeability. But once I got to play a complex adult woman, I let go of that expectation, and it liberated me.” Last season, the list of Terri Schuester’s indiscretions included everything from faking a pregnancy to falsifying nursing credentials. “I’m pretty proud of Terri,” Jessalyn says. “I feel like I’m Terri’s lone champion, so I’m protective of her.”

People recognize Jessalyn more and more these days, now that Glee watchers number in the millions each week — a fact that still surprises her and her cast-mates, who initially expected the show to attract a niche audience. “We knew when we were shooting the pilot that we loved it. Everybody felt, ‘Wow, I’m doing what I always felt I was born to do.’ That’s a very fleeting feeling as an actor. Once in a while you think, ‘I’m an entertainer, I’m a performer.’ The show made us feel that way.”

As Jessalyn’s makeup gets the final touches and her hair is rolled in Mad Men fashion to match our shoot’s retro-chic esthetic, our conversation moves from one cult TV show to another; Jessalyn shamelessly admits her childhood addiction to Little House on the Prairie. “I wanted to be a pioneer so badly. I wanted to die of consumption, and I would make my dad carry me around in a duvet and lay me on the couch. And then my parents and sister would have to come and say their goodbyes. My family was basically held hostage by me. I even had hysterical blindness once, because I was so obsessed with the Mary character.” And she thought she was going to be a painter.

Q: What is the last great book you read?
A: Freedom, by Jonathan Franzen. I read it in two days straight — it was impossible to put down.

Q: What’s on your bedside table?
A: A notebook I write in every few days to record funny things my daughter says. Unread New Yorker magazines.

Q. What part of the world is next on your list?
A. I’d love to go to China. I have never been to Asia and I’m sure it would be fascinating.

Q: What is your guiltiest pleasure?
A. The People’s Court. I know, it’s bizarre. I love the clarity of the judge. I have a lot of trouble seeing things in black and white and I just love it when she lays it all out at the end.

Q. What is your favourite comfort food?
A. Chocolate. Plain chocolate.

Q. Who has been the most influential figure for you?
A. My grandmother, Violet Johnstone. She had an amazing zest for life and got up and out every day. I think about her whenever I am looking for motivation to keep going.

Q. Who do you consider a misunderstood historical figure?
A. Women. I know that’s vague but history is often told from the perspective of the men, and I think the other, equally interesting story is the women who survived childbirth and found ways to clean, clothe, feed and educate the children. The resources that were needed for basic survival are underestimated. Which words do you most overuse? “What?!” I say that all the time. Very high-pitched. It can silence a room. And I can’t seem to stop!

Q. Who or what makes you laugh the hardest?
A. My daughter.

Q. Which gadget could you never give up?
A. My espresso pot. It gets me out of bed.

Q. What is the worst piece of advice you’ve been given?
A. “Don’t jog, it will make your face sag.” What?!

Q. What song do you sing in the shower?
A. “Love the Way You Lie,” by Rihanna and Eminem. I’ve been working on the rap part, it’s coming. . .

Q. What’s your favourite cocktail or drink?
A. I love a vodka martini, dirty with olives.

Q. Who or what do you live for?
A. I live for my daughter, and try to live for myself.

For more Jessalyn Gilsig, check out this gallery where she plays the perfect holiday hostess.