My Dad Raised A Vocal Activist. At 71, He Became One, Too

For most of his life, his resistance was strong but silent. That changed when George Floyd was killed. 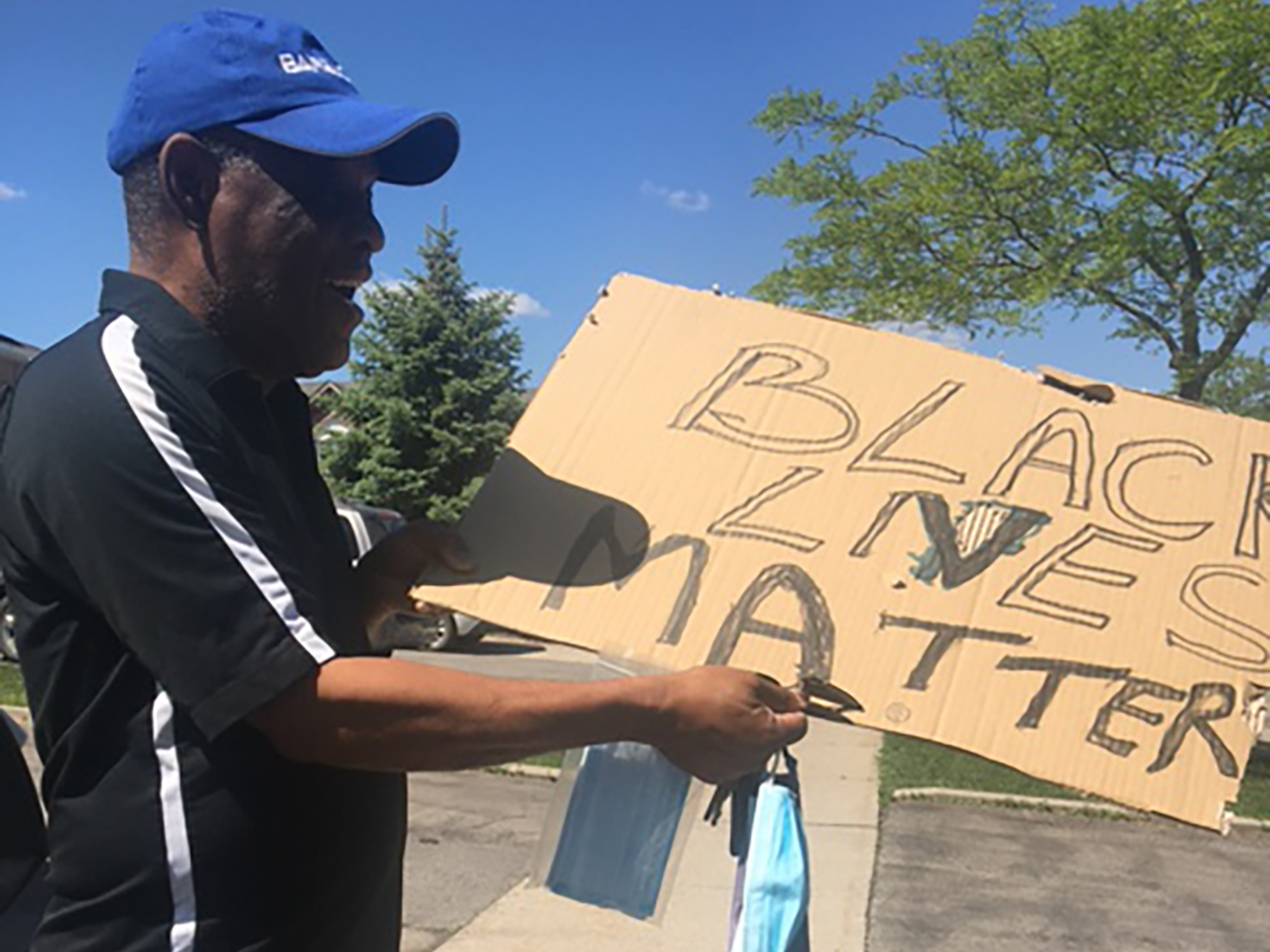 I have never seen my dad cry. Never. Throughout his life, no matter what was thrown his way, he has remained a calm, rose-coloured glasses type of person.

All that changed on May 25, 2020. That day, the day a police officer kneeled on George Floyd’s neck for nine minutes and 29 seconds, my 71-year-old father called me, visibly upset, his voice shaking, simultaneously angry, hurt and desperate. The first words I heard down the phone line was, “When is this going to end? They don’t even see us as human beings.”

For the first time, I heard not only anxiety in my dad’s voice, but fear. His fear was not for himself, but for his 10-year-old grandson, my son. I know how strong the bond is with his grandson; I know my father’s hopes and dreams for him.. And that afternoon, on the phone with my father, I heard those hopes and dreams implode into despair and rage.

A month later, despite his fear of COVID, he doubled up his masks, made his own sign and joined my husband and me at a Black Lives Matter march in the city of Vaughan, Ont., near where my dad lives. He raised his voice with countless others. He kneeled in the middle of an intersection for nine minutes and 29 seconds, the length of time officers kneeled on the neck of George Floyd as he struggled to breathe, crying out for his mother.

The lack of humanity afforded to George Floyd that day ended his life. For so many men—those of my father’s generation, those that came before, those like my husband who came after—that lack of humanity means that to survive you must adapt. You make yourself small, you smile through disrespect, you swallow it each time someone throws ignorant questions your way, each time you interview for a job and are unsuccessful despite having the qualifications, each time you get the job and then spend your days adjusting so you appear less intimidating or aggressive to your colleagues. You become affable, a pleaser; and you ignore the everyday racism that would crush you if you let it in.

My father was born in Barbados in 1949. His country, first occupied by the British in 1627, was still under British rule. Despite this, he has always said that he didn’t know racism until immigrating to Canada in 1978. His first introduction to systemic racism in this country was being targeted by police because he “fit the description” of someone they were looking for. One day, when he saw a crowd standing together on the street, and went to see what was going on. Within moments an officer had confronted him, asking to see ID. We now know this as carding. But at the time, not only was there no term for this racist practise, my father was so new to Canada, he didn’t even recognize that there was anything wrong with what happened. It wasn’t until years later that he processed it; that this was something that happened frequently to Black people. This happened to my father in 1978; over 40 years later, these are still battles we are fighting.

My dad’s quiet dignity always impressed me; he never complained. When my mom was fighting the schools to ensure my sister and I received an equitable education, he supported her from the sidelines. When my parents moved to a new house, my dad climbed a ladder one cold day to check on the eavestrough, and a neighbour came to ask what he was doing and why he was in the neighbourhood. My dad rolled his eyes, ignored the man and turned the story into a joke.

When George Floyd died, all of the injustices and all of the racism that he had faced in his life were placed on a timeline in chronological order. Everything that he had shaken off over the years came flooding back.

The frustration of being a classically-trained organist, but consistently having people try to show him how to play, or assume he isn’t familiar with certain music.

Repeatedly having to find work through temp agencies in order to get a permanent job, because companies weren’t willing to give him one until he had proven that he was a competent employee.

Struggling to obtain a mortgage, being turned down again and again, because of moving goalposts that bank officials could never honestly, or satisfactorily, explain.

Like some Black men scared by perpetual racism, my dad’s resistance wasn’t always obvious. But my dad raised an activist. He bought me books about Black history and Black heroes, wordlessly coming home and handing them to me. I devoured these books. His silent resistance radicalized his daughter.

“I may never have been called the N-word,” he has told me, “but I felt it.” It’s a feeling that he does not want his grandchildren to know. It’s that feeling that brought him out to a march in the middle of a pandemic, despite being in high-risk COVID categories.

All of us—Black folks, Indigenous folks, racialized folks, allies—recognize the importance of creating a better world for our children. But often we overlook our elders. The ones who laid the path before us. The ones on whose shoulders we stand. Those who fought hard, out loud, defiantly, stealthily, all in their own way, making the road clearer for all of us.

Already, only one year after George Floyd’s death and the racial reckoning that has followed, we see the complacency of organizations that once scrambled over themselves to prepare statements on Black Lives Matter and post solidarity messages on their social media. The anniversary passed with barely a mention. My dad has already lived nearly 50 years in a country that continues to discriminate against him. At the age of 71, he marched into the streets, risking his life, to lend his voice for change. What more must he sacrifice for change to actually happen?