Shall we all make a pact to buy less and pay more?

Do we really need all this junk filling our closets? Writer Flannery Dean shares how the collapse of Rana Plaza in Bangladesh has been a huge wake-up call. 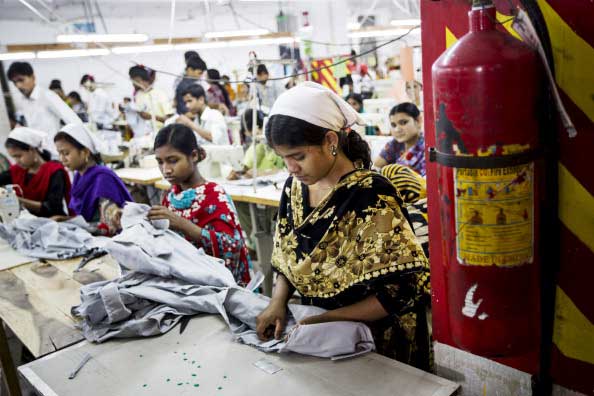 A fire extinguisher hangs on the wall as workers make garments on the production line of the Fashion Enterprise garment factory in Dhaka, Bangladesh, on April 29. (Photographer: Jeff Holt/Bloomberg via Getty Images)

We can never say we didn’t know. The information is out there. It’s everywhere.

Take Bangladesh, for example. There are more than 4,000 garment factories in Bangladesh that employ 3.5 million people, many of whom work 14-16 hour days, seven days a week, in dangerous conditions where they may have to endure, among myriad other abuses and shortcomings, sexual harassment and unconscionable levels of noise.

North Americans love to talk about the ways in which hard work pays off and how the most successful among us have arrived at their positions through enormous personal effort and sacrifice. Apparently, poor workers in emerging nations didn’t get the memo — $48 per month is an average wage even though it’s not unusual to finish one shift at three a.m. only to start the next four hours later.

Since Rana Plaza collapsed in Bangladesh on April 24, killing more than 600 people and injuring thousands, the whole ugly business has become front-page news around the world. And while the poor suffered and died, the rest of us have been left gulping and squirming.

Who among us hasn’t reveled in the abundance of cheap clothing by which we brand ourselves stylistically and let’s be honest here, morally as well?

In a recent article in The New York Times, writer KJ Dell’Antonia confesses her own sins — they are my sins, too, and I suspect may be yours — as she admits to buying too much for too little, all those cheap T-shirts lining the bottoms of closets, our drawers bulging with forgettable stuff manufactured by western companies who invest more in seductive advertising campaigns than in the ethical treatment of employees.

When it comes to consumerism we are all on a treadmill with no off-switch. Admit it, aren’t you sick of seeing yourself in the willfully spoiled image of that smug woman on House Hunters, the one who churlishly demands a walk-in closet to display all her (cheap) stuff? Who needs all this junk anyway?

There are places to go if you want to do better, buy better, think better, be better. For information and ideas, start with Clean Clothes campaign.

Remind yourself that less is more — buy less, pay more. How lucky are we to live in a country where payment is rendered in cash and not blood?

Tell us, have the recent events in Bangladesh changed the way, or the places, you shop?