Author Tanis Rideout on love, writing and her guiltiest pleasure 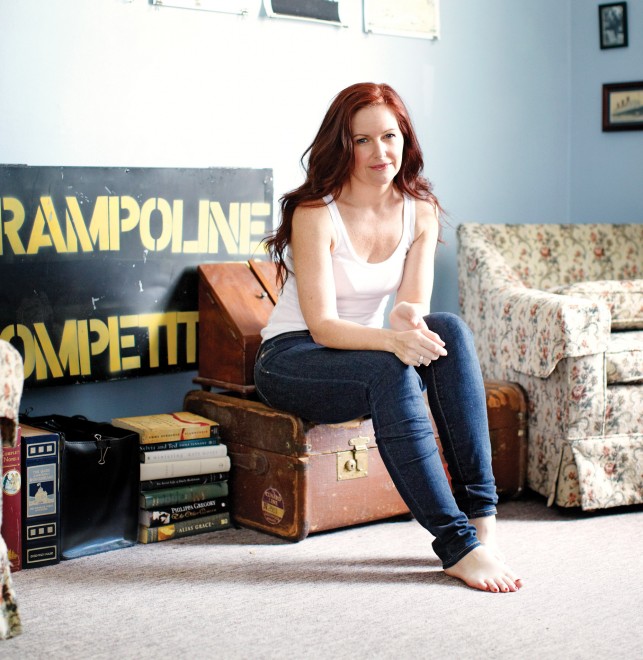 Tanis Rideout loves to entertain. Her coffee table is covered with an elaborate assortment of cured meats, Boursin, baked garlic cloves, chocolate-covered nuts and fresh baguette slices. It’s quite the spread, but when complimented on her hosting skills, Tanis reddens and grins. “It’s fun!” she shrugs.

The charming redhead has more time for company since finishing her debut novel, Above All Things, which hit stores last month. It’s a fictionalized account of George Mallory’s final Everest expedition and the emotions of his wife, Ruth, who awaits his return. It took Tanis six years to write it, during which time she became infatuated with the explorer. “I would joke that if it were possible to be in love with somebody who’d been dead for 80 years, I probably was,” she says.

Tanis met her real-life love, Simon Racioppa, an award-winning television writer who became her husband, at a book reading. “He is convinced I was wearing a red dress,” she says with a laugh, “but I didn’t even own one!” It’s a disagreement that also arises between George and Ruth in her book, which sees Tanis share her own history with that of her central characters, including a love of Paris, where Tanis and Simon eloped two autumns ago.

It’s not the first time she’s chosen a main character who pushes physical limits. She won second prize in the 2009 CBC Literary Awards for her poetry inspired by Marilyn Bell, the long-distance swimmer famous for conquering Lake Ontario. “I wondered what happens to your mind when you’re in hour 13 of doing the same physical action,” she says.

Tanis developed the poem into a series as her thesis for a creative writing MFA at the University of Guelph, which she completed in 2010. She’s since signed a publishing deal, and the collection will be on shelves next spring. “I wrote poetry before I plunged into fiction. It was a great entry point into writing,” she says. “It’s small and it’s personal and you can publish poems one at a time in quarterlies or anthologies.”

While writing poetry on the side, Tanis worked at Literature for Life, a non-profit where she spent five years discussing literature with pregnant teens and young moms in high-risk Toronto neighbourhoods. “It was incredible to watch the transformation of the women. That job was a gift,” she says.

Then, two years ago, Tanis made the lap and started working as a full-time writer. “I set small goals like number of words a day, or I make bets with other writer friends — 100 pages by the end of the month or I owe you a case of beer,” she says. It’s about commitment: “Showing up every day is the biggest part of it. Inspiration doesn’t often strike — it’s good to be at work when it does.”

I wish I was better at… taking risks and trying new things.

My favourite moment of the day is… It’s a tie between finishing my morning workout and when my husband says he’s coming home.

The last time I lost my temper was… at the wheel. It’s not often, but I get aggravated when I drive.

I’m currently reading… Rules of Civility by Amor Towles, The Bride of Science by Benjamin Woolley and The Seven Basic Plots by Christopher Booker.

My guiltiest pleasure is… late-night YouTube dance parties after my husband and I come home from a night out.

My mantra is… a quote from Hemingway: “All we do is look at things and try new drinks.” I like to live by that.

1. A Bordeaux or a Côtes du Rhône: “A dark glass of wine over dinner or with friends… perfection.”

3. Dark jeans: “They’re great with a good pair of heels, and you can wear them anywhere.”

4. My library card: “I go to the library almost daily. I put stuff on hold and then when they come in I have no idea what I’m going to read first.”