At what age should you hang up the bikini? Survey says…

As women age, the arbitrary rules that govern what they can and can’t wear appear to get more and more infantile. Or so a new UK survey indicates. Conducted by a UK diet company—I’m already suspicious—the poll found that most women feel uncomfortable donning a bikini as they near 50 and that they negatively evaluate women who wear bikinis after a certain age. 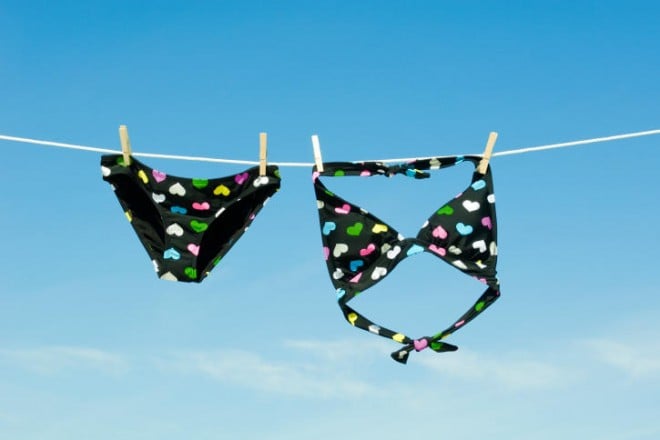 As women age, the arbitrary rules that govern what they can and can’t wear appear to get more and more infantile. Or so a new survey indicates. Conducted by a UK diet company—I’m already suspicious—the poll found that most women feel uncomfortable donning a bikini as they near 50 and negatively evaluate older women who wear them anyway.

Of the 2,000 women surveyed, most agreed that 47 is the age at which women should trade the two-piece for more age-appropriate swimwear. There was no mention of what age appropriate means exactly, but let’s hope they’re thinking of a one-piece swimsuit and not an oversized paper bag.

Oddly, half of the women surveyed, who were between the ages of 18 and 65, felt that there was one exception to that rule, however: ridiculously good-looking older women. In their view, if you look great after 47 you’ve earned the right to bare all on the beach.

Upon first read that exception seems sensible. It’s sort of hardwired in our brains to make the great body + bikini connection, as if bikinis were status symbols and not just pieces of fabric. But the logic seems a tad punitive and a lot nonsensical when you break it down. If women really believe there is an age at which the bikini is a no-no then what difference does it make if she looks good wearing it or not? The exception reveals that the bikini question isn’t really a way to talk about age as much as it is another way of punishing women who don’t meet the beauty standard.

It hardly seems fair that about the age when a woman’s self-confidence is at its glorious zenith, which also seems to coincide with her breasts, belly and thighs heading south, everyone and their eagle-eyed grandmother is telling her to cover up.

I’m 34 and have never worn a bikini. As self-conscious as a 12-year-old girl at a pool party, when I hit the beach I opt to put on my great-grandmother’s swimming costume. That’s because I’m neurotic, however. And perhaps because of that fact I’ve always looked forward to the day when I don’t feel like everyone on the beach is staring at me in my bathing suit. This survey, however, reveals that moment to be a complete fantasy. A grandmother in her 70s is still going to be judged according to the youthful standard, while grandpa, a jingly-jangly vision of freedom in his banana hammock, flies under the radar, his suntan covering all his wrinkly nooks and crannies.

The only consolation for the loss of my dream of old lady invisibility is the fact that “rules” and their exceptions about what an adult woman can and can’t wear after the age of 47 are a complete fantasy too.