Are we headed for a bacon shortage?

Why bacon is in short supply; the battle of the ages at this year’s Junos; a second round of snowpocalypse; women protest in Egypt; and Barbara Bush speaks out in support of gay marriage. 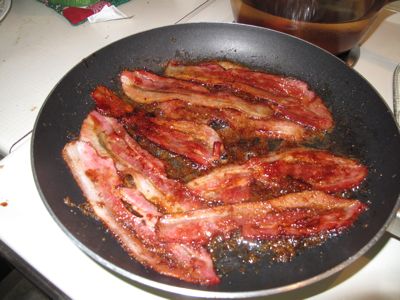 Your taste buds will hate this but your hips will love it – apparently there’s a shortage of bacon and it’s driving the price way up. It seems that our love affair with all things wrapped, covered and soaked in salty pig fat has reached new peaks, and the supply is having trouble keeping up with the demand. A recent article in Maclean’s reveals that while bacon is usually a seasonal food (we like it in summer, on BLTs and burgers), these days we keep munching and crunching right through the winter, which has driven up the cost of pork bellies by 72 percent.

It’s set to be an intergenerational showdown at this year’s Juno awards, with Justin Beiber (16), Drake (24), Johnny Reid (36), Sarah McLachlan (43), and Neil Young (65), all vying for artist if the year. We’ve got to root for Neil on this one, though with the absurd momentum he’s got going right now, we wouldn’t be surprised if Beiber walks away with the prize. Gordon Pinsent would be proud.

For the second time this winter, much of the United States and Canada is bracing for a “Snowpocalypse.” Thousands of flights have been cancelled, and Kansas, Oklahoma, Missouri and Illinois have declared states emergency, with Chicago expecting a record 60 cm of snow. The storm should be going strong in Canada today, with forecasters warning the city of Toronto to prepare for the worst blizzard of the season, complete with near whiteout conditions.

Organizers of the protests in Egypt say more women are out on the streets fighting for democracy than ever before. The fact that women are emboldened to make their voice heard is evidenced by a recent video posting by a young Egyptian woman named Asmaa Mahfouz, in which she openly states that she will go out in the streets and protest. In an article in the New York Times, Mahfouz said, “I felt that doing this video may be too big a step for me, but then I thought: For how much longer will I continue to be afraid and hesitant? I had to do something.”

In a rare break from her father’s policies, George Bush’s daughter Barbara Bush has taped a video – calling on New York State to legalize same-sex marriage. This isn’t the first time the offspring of a prominent Republican has broken ranks to support gay marriage: John McCain’s daughter Meghan McCain and Dick Cheney’s daughter Mary Cheney have both been outspoken supporters. Also of note is the fact that the wives of Bush, McCain and Cheney have supported same-sex marriage to varying degrees.