Amy Schumer's 'Formation' video is all kinds of clueless

The comedian made her career on being a scrappy outsider, but her Beyoncé parody smacks of celebrity entitlement. 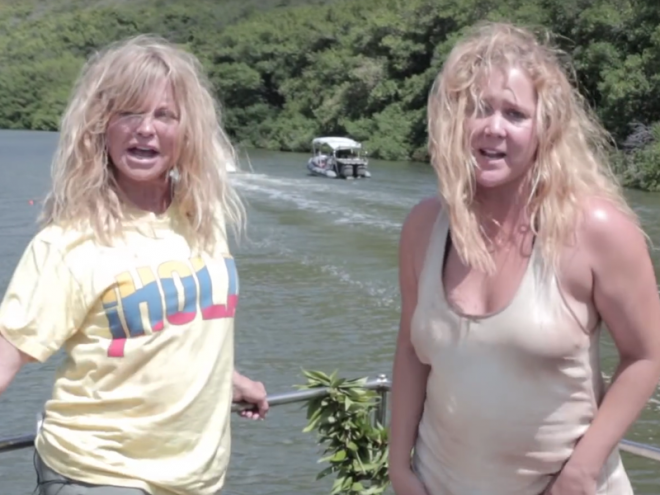 Amy Schumer has offered some of the sharpest, funniest feminist commentary on issues like older women in Hollywood, rape culture and slut shaming. She’s also made some excruciatingly tin-eared jokes about race and people of colour — one old joke from her stand up act went: “I used to date Latino guys. Now I prefer consensual.”

On the weekend, she released a video in which she and her Mother/Daughter cast mates, including Wanda Sykes, Goldie Hawn and Joan Cusack, re-enact Beyoncé’s “Formation” video. (Schumer says Beyoncé gave her permission to do it, and it was released on Jay-Z’s music subscription platform Tidal, but so far Queen Bey has not commented.) Schumer’s critics said it was a racist parody and questioned why she would appropriate a black empowerment anthem. The backlash quickly gathered around the hashtag #AmySchumerGottaGoParty. On Instagram, the comedian responded by saying it was a tribute and quoting a “Formation” lyric: “you know you that b***h when you cause all this conversation.”

The video isn’t interesting or provocative or entertaining — it fails as both a parody and a tribute. It’s just a bunch of mostly white women shaking their hips, flipping their hair and awkwardly lip syncing lines like “I got hot sauce in bag swag.” (I couldn’t help but think of Cusack’s line from Working Girl: “Sometimes I sing and dance around the house in my underwear. Doesn’t make me Madonna. Never will.” Joan, you should have known better.)

Schumer’s intention doesn’t appear to be to mock Beyoncé and her work. But, then, it’s unclear what her actual intention was. Her video ignores, even erases, the rich political and cultural messages about black female identity and black lives and history that are central to the original song and video. It’s the equivalent of white women who go to Jamaica on spring break and return with corn rows: clueless and entitled.

It’s maddening when pop culture figures like Schumer, who are so smart about some issues, are so thoughtless on others. Last year, Monica Heisey wrote an essay about Schumer for The Guardian, noting, “For such a keen observer of social norms and an effective satirist of the ways gender is complicated by them, Schumer has a shockingly large blind spot around race.” Schumer can also be touchy when criticized, and, not surprisingly, she responded to Heisey’s article with tweet that read, “put down your torches before reading this” and “you can call it a ‘blind spot for racism’ or ‘lazy’ but you are wrong. It is a joke and it is funny.”

You know you that bitch when you cause all this conversation. Thanks for the exclusive release Tidal! We had so much fun making this tribute. All love and women inspiring each other. #strongertogether

Her push back at a hint of criticism in an otherwise flattering piece seemed to exemplify Heisey’s point rather than rebut it. Schumer seems caught in a modern day, social media–fuelled feedback loop: celebrity missteps, fans express outrage and disappointment, celebrity replies defensively, critics criticize the defensiveness. And repeat until the next celebrity does something dumb.

Audiences expect more from Schumer not because they think she’s a hack, but because on so many issues she’s been a grass-roots hero. Her show, Inside Amy Schumer, was never a ratings sensation. Her phenomenal rise, as Heisey points out was largely driven by cultural critics who admired her in-your-face feminism and by fans who feverishly shared her sketches.

Schumer seems to be struggling with the transition from being an underdog — the foul-mouthed, feminist, non-size-zero woman fighting for respect in the male world of comedy — to being the glamourous Vogue cover model with a hit film, a famous BFF and a multi-million-dollar book deal.

The former Schumer could be cruder and less careful because she was an outsider and fewer people were watching and listening. The current Schumer, though, is an insider with institutional power and a tremendous platform. Of course, as a comedian and writer, she is free to say and do what she wants. But she shouldn’t be surprised when the rowdy, demanding, passionate audiences who made her famous in the first place, want to keep her honest now that she’s arrived.
More:
A new true crime podcast explores the death of one of Canada’s MMIW
The sperm donor who lied — and the couple that’s fighting back
5 awesome things Margaret Atwood said about Donald Trump