Trekkies blow up over the 'gratuitous' scenes in the franchise's latest flick. 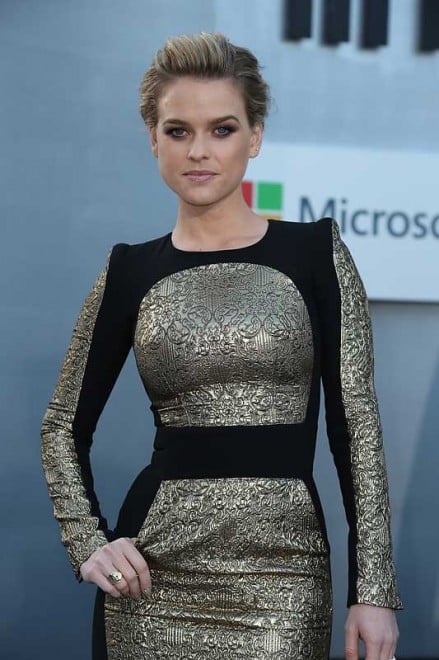 What’s the big deal about a woman in underwear? It’s not exactly an unfamiliar sight. I see a woman in her underwear in my bathroom mirror every morning.  Occasionally she has the nerve to look back at me and shrug.

While a woman in her underwear offers yet one more mundane vision of average humanity — it’s about as singular as the sight of a man blowing his nose while wearing boxer briefs — you’d never guess it from commercials, magazine ads, films and TV. In these fictional realms, the sight of a woman in her bra and underwear takes on the status of living sculpture. Sometimes it’s a work of art, other times it’s something that wouldn’t look out of place standing sentinel in the grotto at the Playboy Mansion.

These lace-and-lycra fetishists never settle for creating a realistic image of a gal making the necessary transition from sleepwear to work wear and back again, a transition that until the invention of pajamas that double as a pant suit, necessitates disrobing. Rather than settle for the sight of a woman in her vintage Hanes Her Ways and ratty sports bra, professional dreamweavers continually aim to perfect the iconic portrait that is the ‘Woman in Gitch’.

If you’re one of those people who roll their eyes when you see a scantily-clad actress stripping off in a movie or TV show (and not because it’s a natural outcropping of the narrative but simply because it’s in the script), rest assured you’re not alone. There are more people like you than you dared hope. And they’re not shy about making their annoyance known to screenwriters and producers.

So annoyed by the presence of a gratuitous lingerie scene in the new Star Trek Into Darkness movie (via The Daily Mail), a few audience members and critics have reportedly called out one of the film’s producers for it. 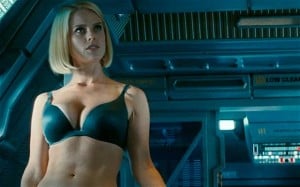 Alice Eve appears in her underwear in Star Trek Into Darkness (Photo courtesy of Paramount Pictures).

The scene, which features actress Alice Eve in a bra and panties, came under fire for being overtly useless, ridiculous and misogynistic (I’d say take your pick of descriptors there, but honestly you can’t have one without the other).

Star Trek Into Darkness producer Damon Lindelof responded to the criticism with an awkwardly phrased apology on Twitter. “I copped to the fact that we should have done a better job of not being gratuitous in our representation of a barely clothed actress.”

Later, he posted the following:

“What I’m saying is I hear you, I take responsibility and will be more mindful in the future.”

Live long and prosper Trekkies for questioning the logic of using cheap tricks rather than creativity to keep an audience entertained. Here’s hoping your search for intelligent life on earth — and in films — starts a peaceful revolution.

Do you think seeing a woman in her underwear warrants such a strong criticism?