Add a splash of colour to your home décor

Put down the beige paint! There are ways to introduce colour into your décor that won't cause a dead faint. 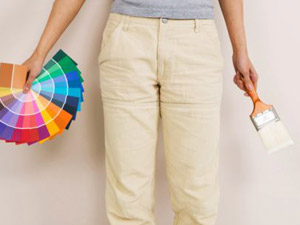 Grab some shades
In the 90s neutral palettes reigned, but it’s 2008. Colour is dominating the runways, and where fashion goes, home dÃ©cor doesn’t trail far behind.

Some of the freshest hues to perk up rooms today are industrial-strength orange, turquoise, girly fuchsia, bright yellow and chartreuse green. And you can never go wrong with a true red: it’s so classic it practically qualifies as a neutral. One caution, don’t get muddy – current colours are clear and bright, and bereft of brown undertones.

Love your accent
Accent walls have been around for a while. For a new spin layer them with peel-off graphics so the effect looks like custom artwork.

Instead of painting an entire wall, use a bold stripe in places like a bedroom, where it can be particularly effective behind a bed, acting as an ersatz headboard. Or use paint to highlight an architectural detail, such as the backs of built-in shelves. And don’t neglect bold bedding, mix patterns for a chic, eclectic look.

Colour fast
It’s easy to tire of a spruce sofa, so don’t sink your investment dollars into a piece that will lose its appeal after a year or two. Instead, think bright accessories such as a toss cushion, vase or lampshade that doesn’t cost a lot of green.

Red carpet
The trend for graphic, artisanal carpets adds a hit of colour in a more subtle way than walls or drapes. To mimic the effect of a custom-made carpet, pick one with a background that’s similar to walls with one bright accent hue. For traditionalists, a sisal rug can be bound with tape in an unexpected shade.

Back story
Bands of tiles in rainbows hues will perk up a backsplash in a kitchen or bath. The Europeans have embraced coloured kitchen cabinetry in a big way: hot shades are appetizing, sapphire blues are sophisticated while greens are energizing. Not ready to commit to a major overhaul? Try colourful small appliances and silicon kitchen accessories – manufacturers are loving brights too.

Take a powder
A small bathroom benefits from the big impact of colour: whether it’s a bright, graphic wallpaper or rich jewel-tone paint. Make a powder room into a major statement by drenching it in one colour with matching towels and accessories.