Why some people are quitting the social-networking site 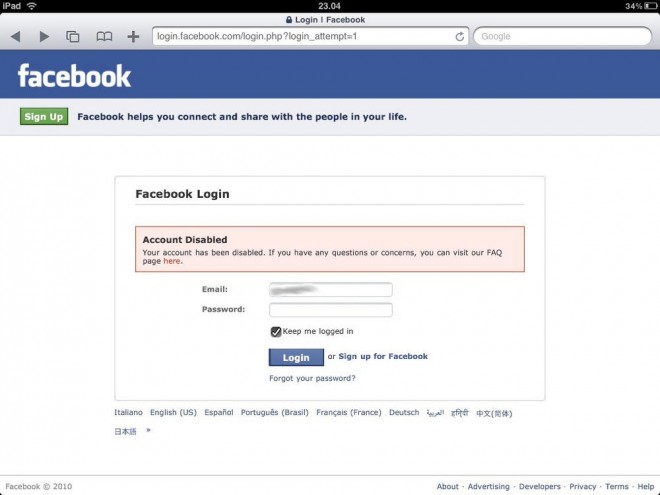 “It was giving me an existential crisis!” said Mélanie Francès, 38, referring to Facebook. Mélanie broke free from her addiction to the 500-millionstrong social-networking site this summer while on a two-week holiday in New Brunswick. “I had become too sensitive to people’s reactions to my status updates. If I didn’t get comments about my posts, I felt hurt and judged,” explained Mélanie, a creative researcher in advertising. “My [online] life was becoming performance-based and I was drifting away from the person I really am. There’s no room on Facebook for anything of depth.”

With her finger poised over the delete button, ready to kill her user profile, Mélanie is part of a growing minority starting to question the siren song of personal confession on Facebook. “It’s a very selective disclosure — an artificial way of editing and branding yourself to your friends, which makes me sad,” added Camilla Johnson-Hill, 36, a creative director and television host in London, England, where she’s preparing to leave Facebook by deleting her photos and notifying friends. “Facebook is a way of competing for who has the most exciting life, which is utterly ridiculous. All you feel is left out, looking at these glamorous photos. But mostly, Facebook makes you a lazy friend because you don’t pick up the phone. It made me feel queasy to be such a bad friend.”

Food stylist and blogger Kendra McKnight, 38, went through the honeymoon phase with Facebook before quitting in January 2010. “Remarkably few people noticed I committed Facebook suicide, which only proves my point that the relationships aren’t as crucial as they appear,” said Kendra, from her kitchen in Montreal. “The people who posted the most often exhibited signs of narcissistic personality disorder. They don’t realize how much you can read between the lines.” The last straw came when she first heard about a close friend’s divorce on someone’s Facebook wall. “It drove me insane to find out that way. I was shocked!”

On one level, Facebook is a seemingly benign way to share photos of holidays and babies. That explains its rampant popularity. Yet it’s also a way of continuing the exclusionary practices of high-school cliques. Unwanted ‘friends’ are ignored, blocked or demoted by being given limited access — where they can still learn about all the events they weren’t invited to. Ouch. It’s also an all-too handy way of stalking one’s exes and new prospects. Facebook is especially fraught for people with social anxiety. For them, it’s a minefield of perceived slights, via invitations that never came and photos of mutual friends en fête. Others fear giving offence inadvertently by not commenting on status updates, not sending birthday wishes or simply saying the wrong thing in such a public forum. Humour and sarcasm, in particular, can be tricky to detect and deploy. “Navigating the real world is hard enough,” said Rachel Brooke,* 39, a television researcher in Vancouver who quit Facebook for the final time in September. “On Facebook, I always felt like a nerd who didn’t have enough friends, so it became a numbers game. If I got blocked from someone’s page, I’d worry about it and wonder if I should talk to them. It’s really hurtful. Who needs that? Now I’m less anxious.”

Serenity returned to 35-year-old actor Amy Lalonde (Rookie Blue, Sophie, Wild Roses) when she left Facebook in March. Why did she leave? “It was such a time-waster! And the guilt — it was killing me!” she confessed, on the phone from her home in Toronto. “Fans from all over the world would ask to be my friend and I just couldn’t reject them outright. So they piled up, waiting for my reply, with all their faces looking at me. A priest called Father Martin from Detroit sent me a request. I felt so terrible not accepting a priest!” But the guilt didn’t vanish as soon as she killed her profile. Amy started getting emails from friends, gently inquiring if she was still on Facebook. “Then it hit me: They thought I’d de-friended them!” she recalled. “That made me feel even worse! I’m too sensitive, maybe, but I was always worried about hurting people’s feelings. . . . Good riddance to it.” Wendy Wood, a clinical psychologist, is accustomed to hearing about Facebook in therapy sessions. “Facebook is a potential breeding ground for all kinds of unhealthy communications,” said Wendy, 41, a Facebook abstainer based in Montreal. “People project all their insecurities onto what they see — the photos, the comments, the invitations. Also, clients with social anxiety use Facebook as a way of avoiding their fears. They feel they have a social life if they’re active on Facebook, but it’s no substitute.” Wendy hears from clients of all ages and genders about how Facebook affects romantic relationships. “Before Facebook, it was easier to move on after a bad breakup,” said Wendy. “I see people get stuck for months in a cycle of checking up on their ex. As often as once a week, I strongly suggest to people that they delete their ex or, if need be, their entire Facebook profile, at least temporarily. You need to mourn the loss of a relationship and it’s hard to do when you’re always looking at pictures of them, especially with their new girlfriend or boyfriend.”

Claire Ridley,* 39, felt the sting of Facebook when she started dating Devin* in 2009. “He had time to update his status, but he didn’t have time to call me. I couldn’t take it anymore, so I quit Facebook, but rejoined three weeks later because Devin went to Bali and I wanted to see what he was up to. Again, he had time to post updates, but he didn’t call me.” When Devin got home, Claire quit Facebook and stopped stalking him online. The relationship with Devin didn’t last long, but she felt free of her online obsession: “Now I call people on the phone, old school.” “It’s not just generational, it’s also a cultural problem,” noted Zoe Taylor,* a 41-year-old Canadian from Vancouver who works for the UN in Paris. Zoe left Facebook in April and doesn’t miss the grief. “It was getting too complicated. We’ve lived in Pakistan, India and Japan, all over, where different cultures have a different understanding of personal and professional boundaries. An Afghani colleague was offended because I blocked him on Facebook, when he hadn’t blocked me. But then again, he would never post photos of his wife and children, so it’s not the same thing. I have photos posted of myself, out on the town with scantily clad girlfriends in London. Do I want him seeing those photos? No!”

Yet it’s hard to suppress our natural curiosity about others. Even Zoe admitted to having a pang of remorse after leaving Facebook when she couldn’t follow up on a rumour about a girl she knew in high school. “Back in the day, she was the town pump,” recalled Zoe, laughing. “But I heard she became this big socialite philanthropist. I wished I’d had my Facebook account so I could ‘friend’ her to see her photos.” Rachel, the television researcher, couldn’t resist the temptation to go back on Facebook in 2009, after meeting a cute guy at a party. “It was the only indirect way of getting in touch with him and learning more about him,” she said, bashfully. “But before sending him a friend request, I spent a lot of time deleting old posts on my page and adding more friends.” Even though the relationship didn’t take off, Rachel stayed on Facebook for several months until the politics got hurtful again: “I had about 150 ‘friends’ by that time, but started to notice that I was getting blocked from some people’s walls, like high school. The insecurity is the hardest part. It’s an incredible relief to be away from all that, for good.” Montrealer Benoit Chaboud* experienced a different kind of cultural blowback from friends on Facebook. Although he grew up speaking French, he lived in Alberta for 20 years and has many anglophone friends. Consequently, he posted his status updates in English. “That was causing a problem,” recalls the 40-year-old artist. “My French friends started a movement to have Facebook in French and didn’t like me writing in English.” They also got upset when he didn’t respond to their posts fast enough. One night, at a party, he saw a friend he hadn’t replied to, whispering and pointing angrily at him. “I got fed up and quit.”

Abstainers from Facebook aren’t necessarily Luddites who are against all social networking. Matthew Milan, one of two Torontonians who spearheaded Quit Facebook Day on May 31 this year, when 35,000 people deleted their profiles, uses Twitter and LinkedIn. Toronto artist Leif Harmsen spent Thanksgiving setting up his profile on Diaspora, the new opensource alternative to Facebook that launched in early October. Leif became the poster boy for the anti-Facebook set when he quit in June 2009, creating “Shut Your Facebook” T-shirts. “The internet is like an ocean. Anyone can make a seaworthy craft and set sail. Facebook, however, is like being on an artificial lake. And you can’t rock the boat,” said Leif, who works in digital multimedia. “I have no desire to be a Facebook fool. People get Stockholm Syndrome and defend it because they’re so dependent on it, but proprietary social networking is not your friend. If you want dignity, control and responsibility on the internet, you need a domain name or else you’re just squatting!”

Dignity, control and responsibility are heavy concepts for a young generation who would answer Leif’s concerns with a unanimous “Lighten up, dude!” To most people under 30 years old, the idea of quitting Facebook simply does not compute. “My assistant is 27 and she looked at me like I was crazy when I started deleting all my photos and getting ready to leave,” recalled Camilla, laughing.