A naked mayor scrambles to cover up

Politicians everywhere take note: it pays to have a sense of humour. Barack Obama has one. Even George W. Bush had one. 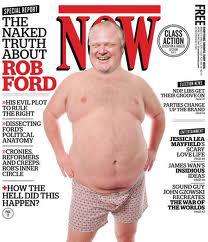 Politicians everywhere take note: it pays to have a sense of humour.

Barack Obama has one. Even George W. Bush had one.

Toronto mayor Rob Ford may want to take a page out of Obama and Bush’s book and learn to laugh—or at least smile through gritted teeth—because it appears he’s taking himself and his powers as mayor of Canada’s biggest city a little too seriously.

On Thursday Torontonians were greeted by the unfamiliar sight of mayor Rob Ford in his underwear on the cover of alt-weekly Now Magazine. (You can see the photo here.)

Clearly, Ford didn’t pose for the digitally altered shot. And neither did he sit for the even more silly photos of him that accompany the story, entitled “Naked Ambition,” by news writer Enzio Di Matteo.

There’s no question the magazine is taking a cheap shot at Ford by representing him in such an unattractive manner. But that’s to be expected. There’s a longstanding tradition in the media for taking the piss out of politicians with an unflattering portrait, whether it’s done via Photoshop or pen and ink. The images are caricatures and exaggerations—they’re really not that different from political cartoons that make Obama’s ears elephantine.

It appears someone at City Hall didn’t care for the sight gag. According to a report in the Toronto Star, Lorraine Picket, a custodial supervisor at City Hall received notice from the Mayor’s office on Thursday morning to remove all copies of NOW from city buildings.

That order was retracted a few hours later, however. Ford spokesperson, Adrienne Batra told the Star that the order to remove and destroy the weekly from city buildings was the result of a “misunderstanding.” That an unnamed member of the mayor’s staff was disturbed by the images and reached out to see what the policy was about having magazines and newspapers in city buildings.

Batra also told the Star that Ford did eventually see the pictures and took the gag with “good humour.”

Ford hasn’t publicly commented on the pictures. In fairness, he’s not obligated to address every insult he receives. And if the order to remove flap hadn’t occurred it would be perfectly natural for him to keep a dignified silence.

But it did happen and as a result he looks like a humourless kitchen-sink despot, a portrait that now rivals NOW’s cover in its absurdity.

Let’s hope in future the mayor’s office takes Toronto Councillor Adam Vaughan’s perspective. Vaughan told the Star: “Politics is a game where people get made fun of all the time. That’s life. Get over it.”

What’s your take on the NOW cover? Pot shot or all’s fair when it comes to politics?