5 Reasons Why You Need To Watch The White Lotus

Come for the dreamy vacay vibes, stay for the sharp critique on white privilege and colonialism. 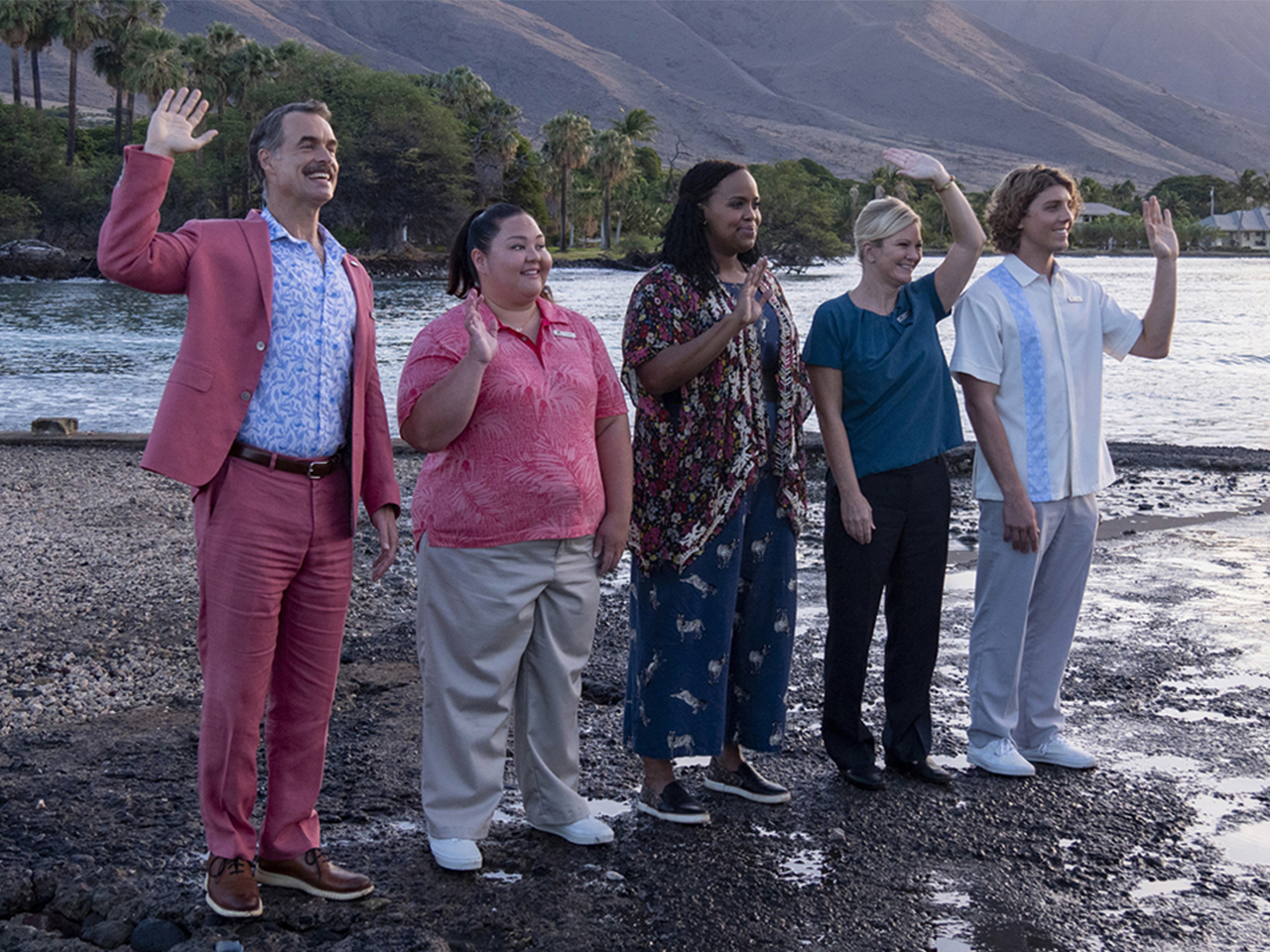 Imagine Downton Abbey set in the modern day and swap out the dreary English countryside for a dreamy Hawaiian island. That’s pretty much the set-up for The White Lotus, a new HBO series about a group of over-privileged white vacationers who arrive in paradise possessed with outsize sun hats and intense personal turmoil. It’s messy rich people drama (think Succession, Big Little Lies), and as with Downton, the real stars are the unsung staffers working behind the scenes to keep up the fun in the sun façade. The show is gorgeous, gripping and gloriously cringe-worthy—and it just concluded its six-episode run, making it ripe for binging. Here, all the reasons to tune in…

Because why choose one genre when you can have them all?

The White Lotus kicks off as both a “who done it?” and a “who is it?” when millionaire man-boy Shane lets us know that there’s a dead body accompanying him on his flight home from Hawaii. Could it be his wife? is what we are supposed to wonder…or maybe not… In this excellent interview with Vulture, creator Mike White admits that he put an unidentified cadaver in the pilot because in the past, his critically acclaimed shows (watch Enlightened!!!) have struggled to find a wide audience. So this time he decided to start by giving the people what they want: more corpses…and a mystery. From there we get a mix of dark comedy and thoughtful drama and sometimes both: the scene where the monumentally unhinged Tanya (Jennifer Coolidge) scatters her mother’s ashes in the ocean is equally hilarious and heartbreaking. And then by the end we get flecks of full-on slasher flick. (And—don’t worry—a satisfying conclusion to the whose the body? hook) 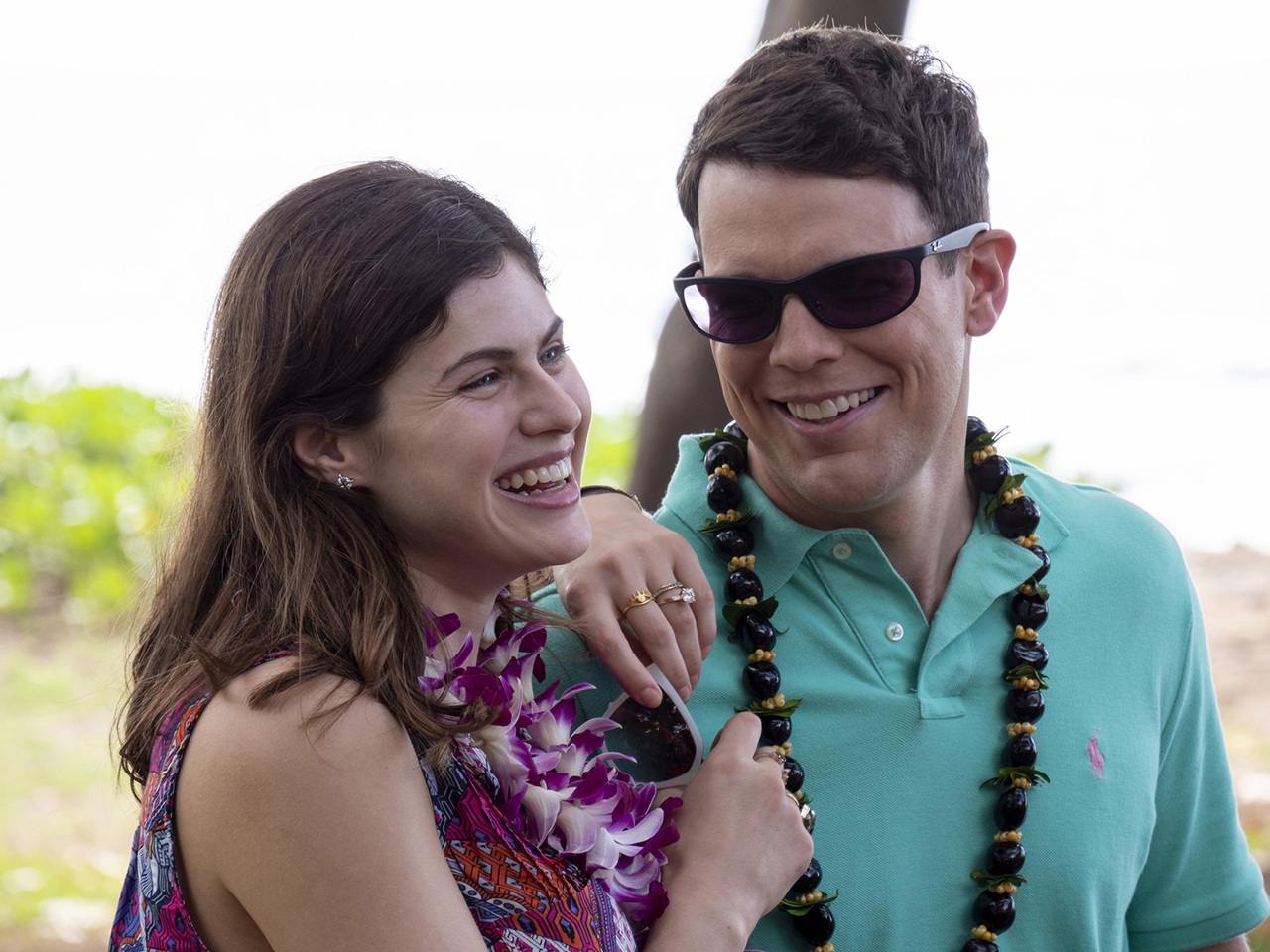 Pete from The Office (Jake Lacy), Kelli from Insecure (Natasha Rothwell), Dom from Looking (Murray Bartlett), Phoebe’s gay husband from Friends (Steve Zahn), Stifler’s mom (Jennifer Coolidge)! Apart from Connie Britton (arguably the show’s only A-lister), almost all of the faces have that “where do I know you from?” familiarity. And now these accomplished actors get a chance to flex their muscles—in some cases literally, as with Zahn’s awkward ape man sex dance (A 10/10 on the cringe scale). Bartlett, an Aussie actor who got his start on—yes—Neighbours and later played Carrie’s shoe distributor friend on Sex and the City, is probably The White Lotus’ biggest breakout sensation, earning well deserved props for his portrayal of hotel manager Armond. Lacy nails his self-involved bro-hard Shane whose obsession with not getting the best room (he got the second best one) is the epitome of #firstworldproblems. And Rothwell’s Belinda (a butterfly among the WASPS) brings heart, charm and excruciatingly well timed eye rolls. 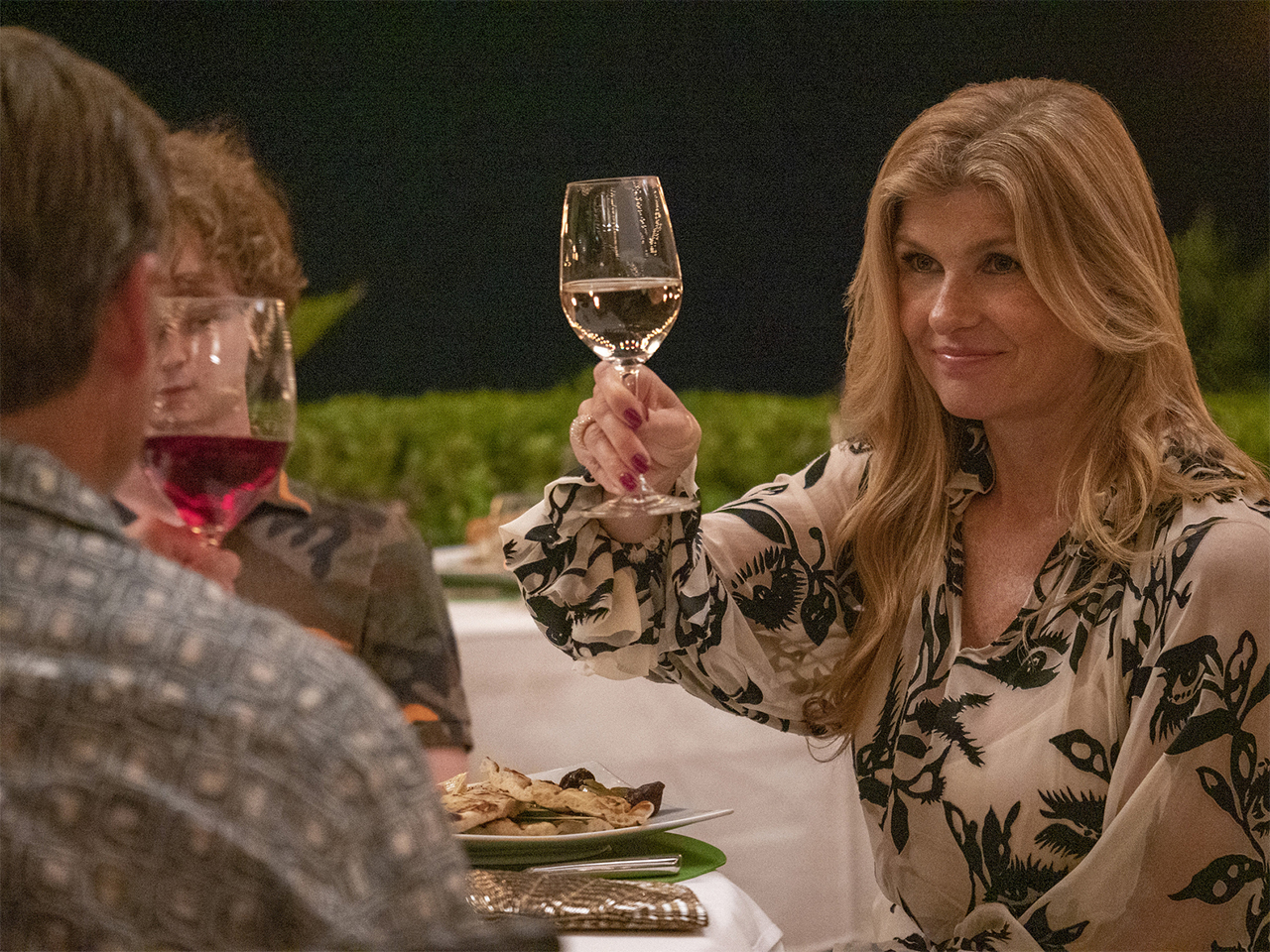 Because Tami Taylor is even better as a b-word

Connie Britton is a marvel. Whether you fell in love with her in Friday Night Lights or Nashville or waaay back when she made boxer shorts look sexy in The Brothers McMullen, this is a woman whose exceptional talent is matched only by her exceptional hair. Vogue recently said of the 54-year-old, “Nobody Elevates the White Suburban Mom Trope Quite Like Connie Britton.” In this case, Nicole Mossbacher is a grown up #girlboss whose progressive bonafides are at least a little out of step with her four-figure kaftans. 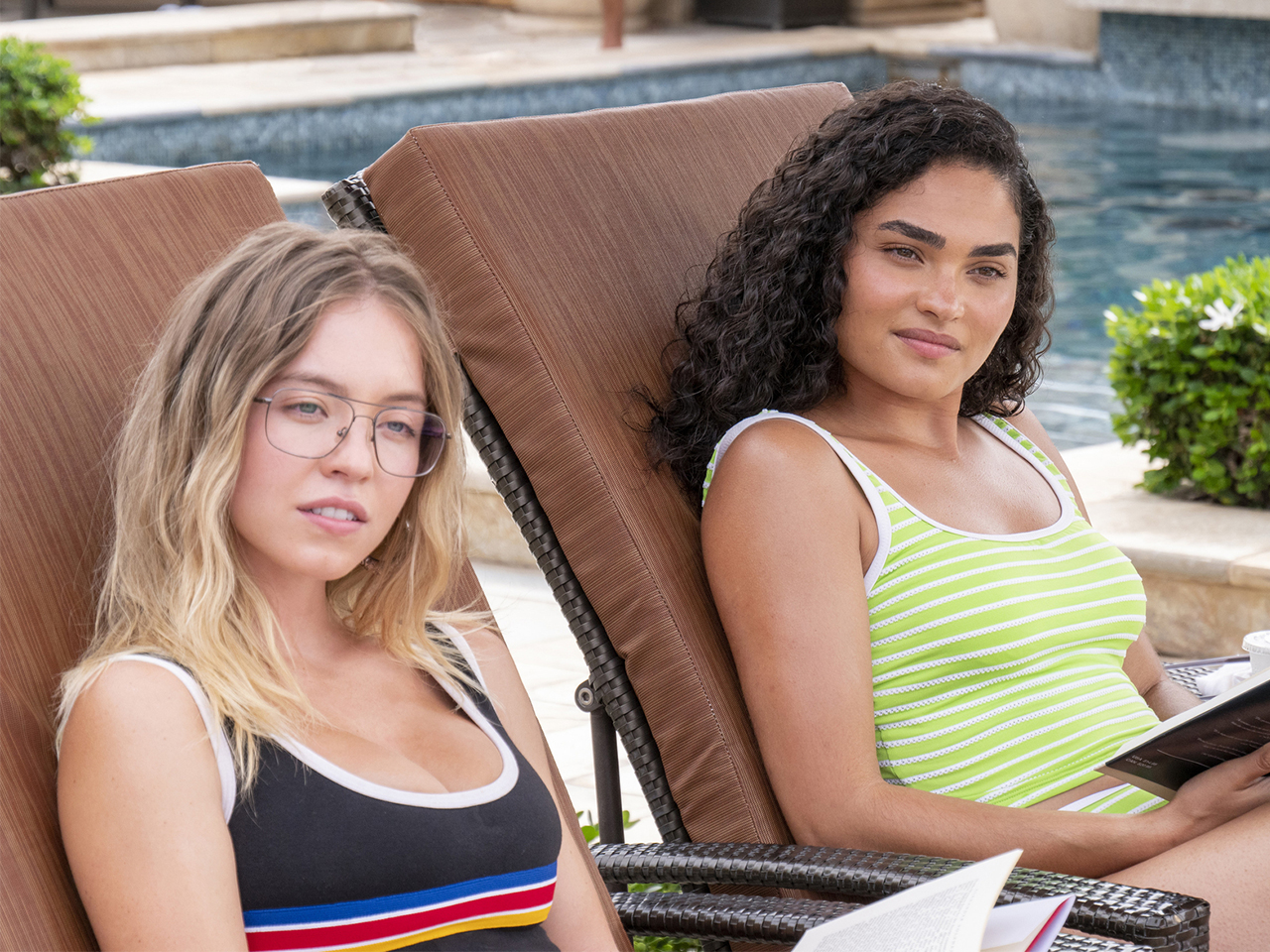 Because these teens turn mean girling into an art form

Watching Olivia Mossbacher and her friend Paula traipse around the resort in a semi-stoned stupor, you will find yourself wondering whether you are supposed to hate these girls (they’re so judgy), or love them (they’re so cool), or secretly want to be them (ding, ding, ding). The biker short and bikini sporting symbols of Gen Z are long on social justice speak while lacking in moral substance. And because of them we know that there are professionals employed to select books that look good on Instagram. 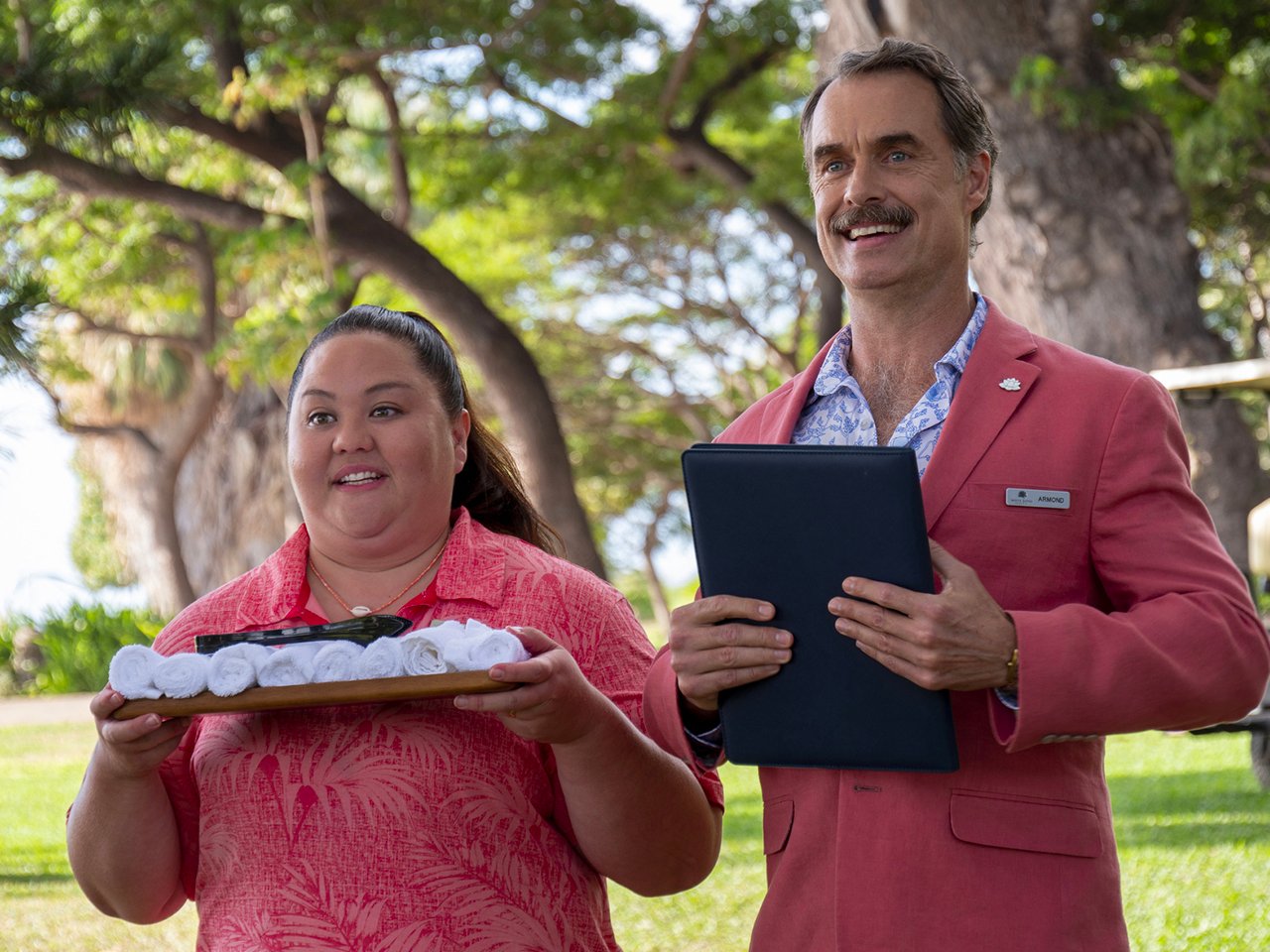 Because good art should make you uncomfortable

Whether it’s watching as the Hawaiian staffers dance in traditional Hawaiian dress for the white hotel guests or the problematic power dynamics between Belinda (the Black spa manager) and Tanya (the white-hot mess), a lot about The White Lotus will make you feel uncomfortable—and that’s the point. White (himself a white guy) has said that the show itself deserves to be interrogated on the thorny realities of who gets to make art and whose voices are prioritized. In one particularly heavy scene, Steve Zahn’s straight white male character asks defensively if he is supposed to just give away his money and “just disappear.” (Note that we never learn what he does for a living—only that he paid $76,000 to buy his wife a set of I’m-so-sorry-I-had-an-affair silver bangles). The beauty of the tropical setting can’t conceal the ugly legacy of colonialism, which is obviously not going to be resolved in a tidy six-episode arch. But it gives viewers a lot to think about, which is more than you can say about most summer viewing.