We've compiled the best bits of trivia about John Hughes' crew in time for The Breakfast Club's 30th anniversary. Sincerely yours, Chatelaine. 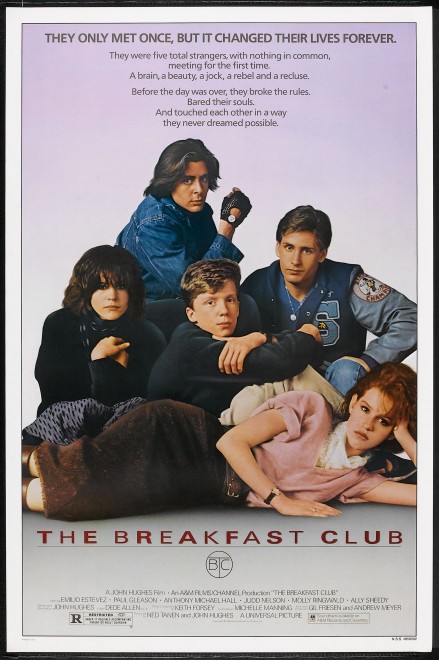 It’s been three decades since John Hughes’ detention movie first taught us that “each one of us is a brain, and an athlete, and a basket case, a princess and a criminal.” In Canada, Cineplex is marking The Breakfast Club’s milestone anniversary with special screenings across the country. We’ve got everything you need to know about the movie, the cast and the legacy of what has been called the greatest high school movie of all time.

1. The group-dance scene was only supposed to feature Molly Ringwald’s character, Claire. Ringwald was feeling self-conscious that day, so Hughes re-choreographed it with the whole cast.

2. Judd Nelson (Bender) nearly got fired for getting too ‘method’ with his acting — in keeping with his character’s “criminal” nature, Nelson actually started picking on Ringwald when the cameras weren’t rolling.

3. Hughes initially asked Anthony Michael Hall and Ringwald to star in The Breakfast Club while he was directing them in Sixteen Candles.

4. Between the filming of Sixteen Candles and The Breakfast Club, Hall and Ringwald dated.

5. Ringwald was originally cast as Allison Reynolds, the basketcase, but she lobbied for — and later won — the role of queen bee Claire.

6. Coincidentally, Sheedy was originally considered for the starring role in Sixteen Candles, which eventually went to Ringwald.

7. Nicolas Cage auditioned for the role of Bender, but extended an offer to John Cusack instead. He then replaced Cusack with Nelson. (Apparently, Cusack wasn’t threatening enough.)

8. Emilio Estevez also auditioned for Bender, but was cast as Andrew, the athlete.

9. The “dandruff” in Allison’s hair was actually Parmesan cheese.

10. Scenes for The Breakfast Club were shot in sequence after three weeks of rehearsal.

12. The lyrics from David Bowie’s “Changes,” used at the beginning of the film, were suggested to Hughes by Sheedy.

13. Hughes makes a cameo in The Breakfast Club as Brian’s dad, who picks up Brian after detention.

14. Bryan Ferry, Billy Idol and The Fixx were all approached to sing the film’s theme song, “Don’t You (Forget About Me).” When they turned it down, the honour went to Simple Minds.

15. Ringwald recorded a version of “Don’t You (Forget About Me)” for her 2013 jazz album, Except Sometimes.

18. Just before her 40th birthday, Ringwald wrote a book: Getting the Pretty Back: Friendship, Family, and Finding the Perfect Lipstick.

19. Dawson’s Creek aired a full-episode homage to The Breakfast Club in its first season.

20. Glee also features numerous Breakfast Club references, including this performance of “Don’t You (Forget About Me).”

21. Ringwald, Sheedy, Hall and Nelson reunited at the 2010 Academy Awards for a tribute to Hughes, who died of a heart attack in 2009.

22. Sheedy was a bridesmaid in Demi Moore and Bruce Willis’s 1987 wedding.

23. Hall is the godfather of Robert Downey Jr.’s son, Indio.

25. Estevez was considered by Blum to be the leader of the Brat Pack.

26. All but one of The Breakfast Club‘s cast members has guest starred on TV show Psych. (Sorry, Emilio.)

28. The studio worried about The Breakfast Club’s appeal to teens. As one exec told Hughes, “There’s no action, no party, no nudity.”

29. On the day Chicago Sun-Times film critic Roger Ebert visited the film’s set, both Hall and Sheedy were filming crying scenes. Ebert teared up as well.

30. The no. 1 question posed to the cast by fans is “What happened on Monday?”

Click here for a Breakfast Club–themed menu, ideal for an ’80s-movie marathon.