Unroll your blanket and unpack your picnic. Balmy summer nights were made for open-air entertainment 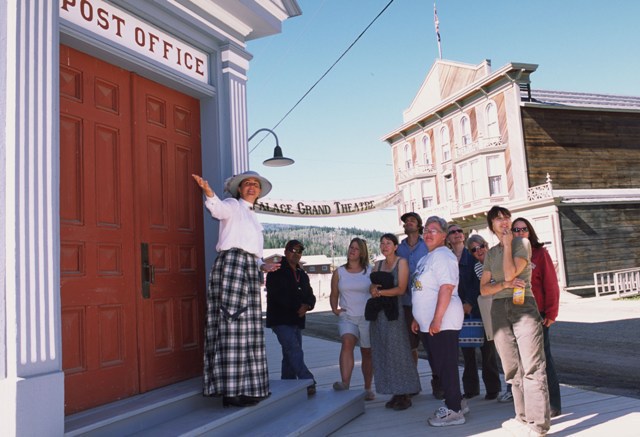 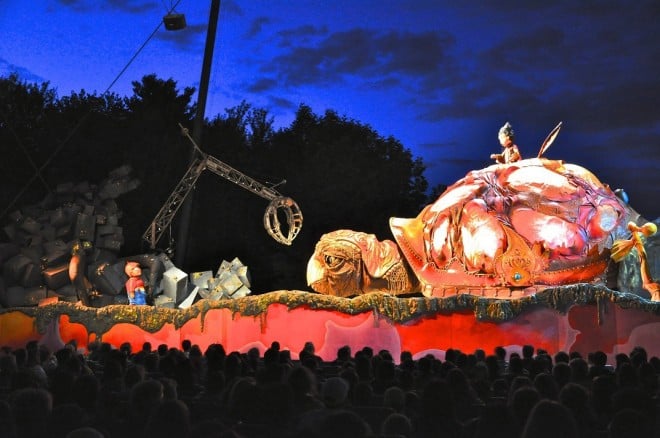 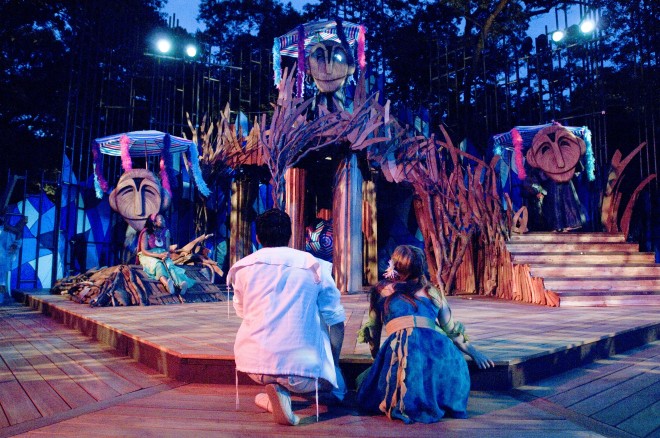 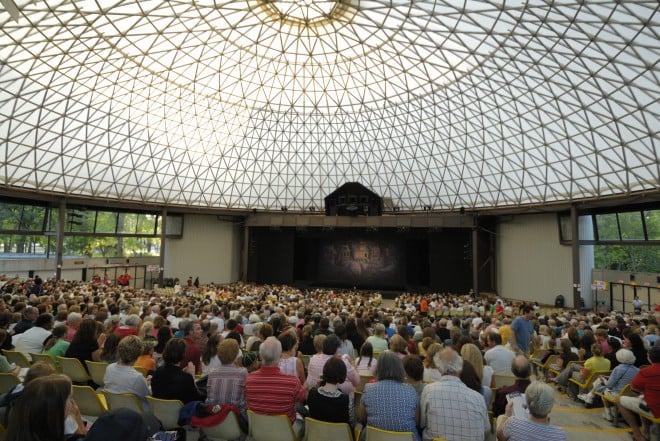 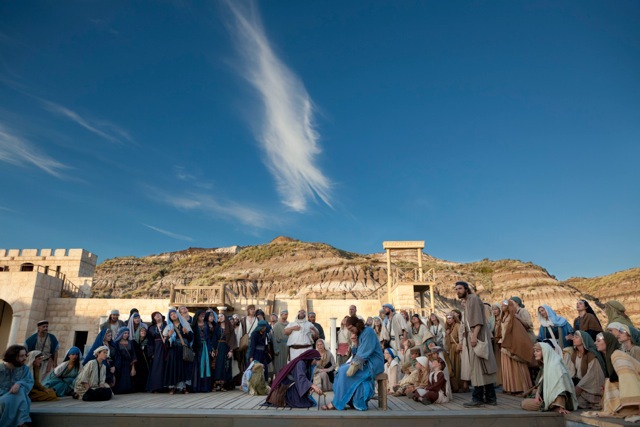 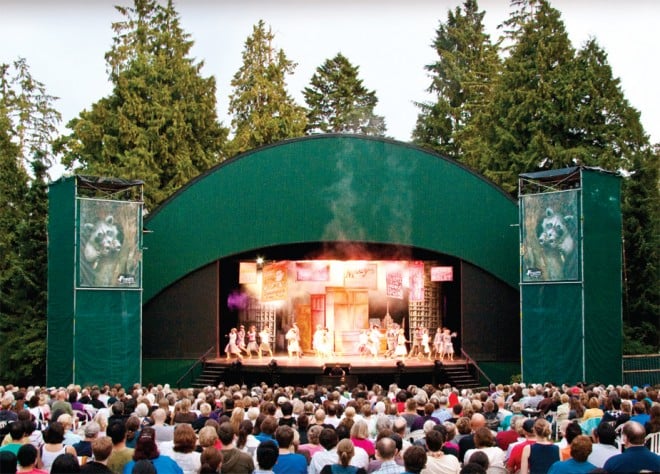 Theatre under the Stars, Vancouver

Dawson City, Yukon
Parks Canada
Show: Strange Things Done Under the Midnight Sun is a guided tour of historic Dawson City led by a costumed interpreter.
Setting: Stroll the charming, wild-west-like streets while learning of the larger-than-life characters that roamed them during the height of the gold rush.
Scoop: Stop in at the Commissioner’s Residence, the Palace Grand Theatre and Robert Service’s cabin to witness iconic Klondikers in action — you’ll find daily programs with costumed characters at each.
Runs until September 16.

Victoria
Symphony Splash!
Show: While this isn’t outdoor theatre, it’s an outdoor spectacle not to be missed! Victoria’s Symphony Orchestra dazzles on a barge-turned-stage in the middle of the city’s harbour.
Setting: Audience members either watch from lawn chairs on shore or pull up in their vessel — it may be sailboat or a kayak — to surround the floating stage.
Scoop: The concert concludes with a performance of Tchaikovsky’s 1812 Overture, complete with bells, cannons and fireworks.
August 5.

Vancouver
Theatre under the Stars
Shows: Two Tony Award–winning musicals set in 1912: Titanic and The Music Man. Titanic is, well, titanic, while The Music Man centres on Harold Hill, a charming con man posing as a marching band organizer.
Setting: Patrons sit in the Malkin Bowl among the soaring cedar and fir trees of Stanley Park.
Scoop: You get three tickets free if you sign up for Musical Theatre Camp.
July8–August 18.

Armstrong, B.C.
Caravan Farm Theatre
Show: The Notorious Right Robert & His Robber Bride is a riotous tale of a bank-robbing couple in BC’s old wild west.
Setting: Set on an 80-acre farm, there isn’t an official performance area. From woodland to fields, the play is staged wherever feels most fitting.
Scoop: Enjoy entertainment all year round — annual productions include a fall play and a winter one-act sleigh ride show.
July 24 – August 26.

Drumheller, Alta.
The Canadian Badlands Passion Play
Show: Feel as though you’ve been transported back 2000 years as the story of Christ’s crucifixion unfolds before your eyes.
Setting: The Alberta badlands, where sedimentary rock formations (hoodoos) resemble the topography of ancient Israel and create top-notch acoustics.
Scoop: It’s a three-hour show, so bring a pillow and be prepared for an array of weather conditions.
July 13-22.

Calgary
Shakespeare in the Park
Show: A Midsummer Night’s Dream
Setting: Located in downtown Calgary’s idyllic Prince’s Island Park, nestled on the south side of the Bow River. The huge stage-front grassy area is perfect for sprawling out on a blanket.
Scoop: Support the next generation of Alberta theatre artists with this collaboration between Theatre Calgary and Mount Royal University. The show is pay-what-you-can.
June 27 – August 10.

Saskatoon
Shakespeare on the Saskatchewan
Shows: Hamlet and As You Like It. A tragedy and a comedy come to life, one of which is classically presented while the other is contemporary. (Last year’s Love’s Labour’s Lost was set in modern day at the University of Saskatchewan’s campus.)
Setting: Large tents on the banks of the South Saskatchewan River represent the Elizabethan stage with emphasis on costumes and actor-audience interaction.
Scoop: Look out for workshops, tours, art displays and medieval feasts.
July 11–August 26.

Winnipeg
Rainbow Stage
Show: The 80s classic Footloose, and the heartstring-tugging story of Annie are both performed by the Rainbow Stage group, known for producing Broadway talent.
Setting: The 2,230-seat theatre is covered, so the show will always go on.
Scoop: Watch for rush tickets. The theatre’s also licensed to sell wine and beer, so you can really let loose.
Footloose, June 18-July 8 and Annie, August 9-31.

Toronto
Shakespeare in High Park
Show: Actors return to the enchanting High Park amphitheatre for a 30th season to perform A Midsummer Night’s Dream.
Setting: Tiered grassy seating spans upwards from the stage, where friends and family feast on picnics.
Scoop: The show is pay-what-you-can (the recommended donation is $20 per person).
June 26 – September 2.

Ottawa
Odyssey Theatre
Show: The Game of Love and Chance, an 18th-century classic about love, class prejudices and forbidden passion.
Setting: This theatre group is known for its intricate masks and is inspired by Italian Renaissance performance.
Scoop: (Or two!) Grab an ice cream from vendors.
July 26-August 26.

Ontario
Driftwood Theatre
Show: A Midsummer Night’s Dream
Setting: Just like the travelling theatre troupes of old, this bus is loaded with eccentric actors, quirky costumes and yummy concessions to bring the show to a city near you.
Scoop: The tour is stopping in 25 Ontario communities and the show is pay-what-you-can.
July 12 – August 19.

Montreal
Repercussion Theatre
Show: A 1960s Italian-inspired take on The Taming of the Shrew, with a carnival feel — complete with bicycles and a circus-top.
Setting: The cast and crew travel (with the stage!) to 15 different parks around Montreal, in order to bring theatre to communities all over the city. Performances are in English and lawn chairs are available to rent.
Scoop: Bring a non-perishable food item with you. They’re then donated to a food bank located in the community of each different performance.
July 11 – August 5.

Halifax
Shakespeare by the Sea
Show: Alice in Wonderland and two Shakespeare plays: The Merry Wives of Windsor and Titus Andronicus
Setting: Take in the seaside Point Pleasant Park, where the performances are set amongst the backdrop of historic forts and batteries.
Scoop: Don’t let the rain scare you —the performances are moved to the park’s indoor Park Place Theatre in the event of wet weather.
July 1 – September 2.

Canning, N.S.
Two Planks and a Passion
Show: Lysistrata, an ancient Greek play about gender issues and war.
Setting: The director scours the 178-acre grounds for the perfect place to tell his story. Actors and audience interact in an intimate performance without technology or electricity. The natural scenery allows for impromptu characters — an eagle flying overhead or deer frolicking behind.
Scoop: Bleacher-style seating, so dress for the weather!
July 14– August 11.

St. John’s, N.L.
Shakespeare by the Sea Festival
Show: The festival celebrates 20 years with a family-friendly take on A Midsummer Night’s Dream.
Setting: Enjoy the free admission and sprawl out in the lush, Victorian-style Bannerman Park. Chairs are also available to rent if you feel your bottom aching!
Scoop: Don’t miss other performances during the festival, including regular productions of King Lear, Above & Below and The Curious Case in the Colony: A Sherlock Holmes Adventure.
July 8 – August 13.