10 Unanswered Questions About The Undoing

Huge spoilers contained within (don't say we didn't warn you). 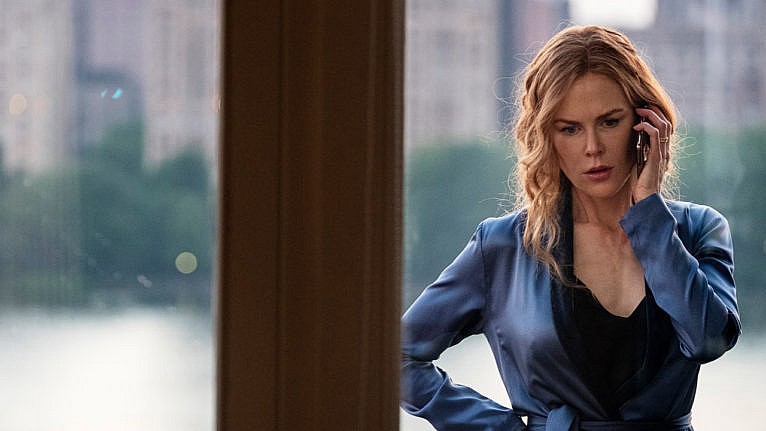 When it comes to true crime, they say the first suspect is often the husband. And it turns out that in the case of Nicole Kidman’s character Grace Fraser in HBO’s popular thriller The Undoing, the cliché was right. The November 29 finale confirmed what the show was telling us all along:

Grace’s husband Jonathan (played to creepy and cringe-inducing perfection by Hugh Grant) did in fact murder his mistress Elena Alves in cold blood.

The revelation came after a season of incredible acting, amazing coats and ample twists and turns in which not one character was safe from suspicion (and had everyone, including celebrities like Travis Scott, Hailey Bieber and Issa Rae, commenting and speculating about who the murderer was).

THE UNDOING is the perfect Thanksgiving binge. I love white mess.

And, while the final question of who killed Elena Alves was cleared up in the breathtaking season finale, viewers were left with many burning questions. Like, where did Grace get her now-iconic coats? Will there be a second season of The Undoing? And what in the heck happened to sweet bébé angel Miguel?! Let’s dive in.

Where does Grace get her coats?

Nicole Kidman may have started out as the star of The Undoing, but by the end of the six-episode season it was crystal clear that the true star of the show was the wardrobe—specifically Grace’s majestic coat collection. The floor-sweeping, jewel-toned garments (always with a tie belt, obvi) are a staple in Grace’s Upper East Side wardrobe, making her stand out in a seas of grey and black-wearing New Yorkers as she runs around the city figuring out whether to exonerate or implicate her philandering hubby. How *anyone* who’s not Elton John can rock a peridot green, alligator-print coat with a Little Red Riding-style hood is beyond me, but for some reason it works on Kidman. And the decision to have Grace don these elaborate coats was an intentional one. In an October 22 interview with FLARE, Kidman said that the wardrobe direction was important to director Susanna Bier in the storytelling. “The coats are like a comfort,” Kidman told FLARE. “They’re like a protection and a shield; the green coat is a very particular choice by Susanna. She had the coat made and she wanted that almost fairytale quality to it. That then turns into a nightmare.”

And people on the internet are obsessed. Since the first moment Grace sashayed onto our screens, everyone wanted to know where said coats were from, and wanted to find their own dupes, especially when it came to the aforementioned green coat, a deep red belted topper and the embroidered cape that Grace wears to the charity auction in episode one.

And luckily, thanks to Town and Country magazine, we now know the answer. And sorry folks, but you won’t like it. “I made those three pieces for the character of Grace Fraser. They are now only available in the storage area of the HBO archive,” costume designer Signe Sejilund told the magazine. So while we may not be able to get our hands on the *exact* coats she rocked throughout the show, true fans can take some sartorial cues from the spurned wife—i.e. rich tones, supple fabrics and always a belted waist—and translate it into their own outerwear.

How do you clean a sledgehammer in a dishwasher?

One of our other big questions after the finale: How in the heck do you even wash a sledgehammer in a dishwasher? In the fifth episode of the season, viewers found out alongside Grace that her son Henry had the murder weapon stashed away in his violin case. In the finale, the show revealed just what had happened, detailing how Henry found the tool hiding in an outdoor fireplace at the family’s beach home, running it through the dishwasher twice to clean off any evidence in the hopes of helping his father before tucking it away.

And while it’s understandable that Henry would want to help his dad (he is just a kid, after all), we just don’t buy that he could discreetly run it through the home dishwasher not once, but twice, unnoticed. First of all, it’s a *massive* hammer. How do you even fit that in the dishwasher rack? Second of all, does Henry even know how to work a dishwasher? He’s a privileged tween who only seems interested in practicing the violin and getting attention from his dad. And finally, when would Henry have even had time to run said sledgehammer through two hot washes without his mom knowing? Grace was out of it in the first few episodes, but are we to believe that she was *so* out of it that she didn’t hear the churning and high-pitched whirring of the dishwasher? We don’t buy it!

How did Grace keep her nails so chic while her life was crumbling?

Another mystery? Just how Grace managed to find the time and privacy to keep her perfectly manicured digits so well-maintained during her husband’s murder trial. Throughout the season, Grace always had an on-point mani, typically in a crisp black or red dark hue; and we get it, self-care is important. But for a woman in a *very* high-stress situation with a lot of media scrutiny around her, it’s safe to assume that A) those nail beds would be nibbled down from anxiety biting, and B) Grace probably wouldn’t have the time or inclination to battle hoards of paparazzi outside her home to head to midtown for a quick mani/pedi. Perhaps, because she does live on the UES, after all, Grace had a bi-weekly at-home manicure appointment with a discreet and trusted nail tech (definitely arranged by her BFF Sylvia) to get her through. Or maybe she’s a fan of the DIY mani, that can be an actually therapeutic ritual. Either way, her tips remained in tip-top shape.

Whose helicopter was that in the finale of The Undoing?

Potentially one of the most hectic and inexplainable moments of the finale came after the realization that Jonathan was attempting to kidnap his son. When Grace realizes that Henry didn’t show up to school, at the same time that Jonathan’s lawyer reveals he hasn’t arrived at court, Grace and her father take off, jumping into an unmarked black helicopter, racing after Jonathan and landing, with Grace running through police barricades to reach her son. OK, but whose helicopter *was* that? Because if it was the NYPD’s…we have a lot of questions. For instance, why would the police department allow a civilian (who also happens to be a frantic, terrified mother) ride with them to apprehend a suspect? Isn’t there a ton of protocol?! Or maybe it was her father Franklin’s helicopter (if his apartment is anything to go off of, that man has *a lot* of money), in which case we have to ask: can private, civilian helicopters just take off willy-nilly to chase fugitives? Again, protocols!

Again, we understand that Grace was going through a pretty tough time, what with trying to figure out if her adulterous husband is also a vicious killer. But we were aghast to see, in the final episode, Grace showing up in court toting around a clutch purse of all things. What would a clutch even hold besides your necessary amount of tissues and a stress ball?! But then again, what even is an appropriate purse for when your husband’s on trial for murder?

Do we think Kourtney Kardashian actually watched The Undoing?

Is Kourtney Kardashian low-key on HBO’s marketing team, because if not, the show couldn’t pay for better press. Ahead of the finale on November 29, the reality TV star took to Instagram to share a carousel of photos of herself in a sassy matching set with the caption “Who killed Elena Alves?”. So, what does Kourt’s thirst trap have to do with The Undoing? Absolutely nothing. Which is what makes her caption so perplexing. Why not post a photo of herself lounging on her massive couch with her supersized TV? Or perhaps rocking a plush, jewel-toned coat as an homage to Grace? Kourtney, these photos would have *all* made much more sense!

Kidman must have taken a cue from the Mariska Hargitay school of acting, because like Hargity’s Olivia Benson on Law & Order SVU, the actor is a pro at over-emoting intense emotions with her eyes.

And they were working overdrive in the finale of The Undoing. In one particular scene, in which Jonathan, Grace and lawyer Haley Fitzgerald are interrupted at the courthouse, when Elena’s husband Fernando bursts into the room to chastise Haley for putting his young son on the stand, I seriously thought Kidman’s Grace was going to burst a blood vessel for all the bewildered and frantic flicking her eyes were doing. It was intense. So, should Kidman win an Emmy for her peepers’ latest performance? 100 percent.

What the heck happened to Miguel in The Undoing?

While viewers may have been divided over who the murderer was, one thing most people can agree on is that Elena’s young son, Miguel, is an angel who must be protected at all costs. And, after first finding his mother dead and then being forced to testify during the trial, we want to know how our sweet boy is doing! TBQH, I would watch an entire episode about Miguel’s life after the trial, because we have so many questions. Did the Alves family remain in New York? Did Miguel go back to the same private school or switch to a school closer to home? Did Henry and Miguel actually become BFFs, bonding over their shared tragedy and starting a supportive life-long friendship? We have to know!

Was anyone else underwhelmed by the finale of The Undoing?

As entertaining of a show as The Undoing was, we have to ask: Was anyone else a little underwhelmed at the reveal? After five episodes of Grace vehemently defending her husband’s innocence, the switch to seeing him as guilty—after Jonathan tried to blame their son for Elena’s murder—seemed too subtle. And like another great HBO show that dropped the ball in the latter half of its final season, like Game of Thrones‘s Daenerys, Jonathan’s sharp pivot to villain felt like it came out of nowhere. Yes, we knew he was an absolute asshole, cheater, liar, narcissist and maybe even sociopath—that was all gradually revealed throughout the season—but to go from that to him maniacally laughing as he flies down the interstate, screaming at his son about clams felt like too much, too fast.

Will there be a season 2 of The Undoing?

Unfortunately for fans of the show, it looks like episode six is likely the last we’ll see of the Fraser family and those around them. Because despite its immense popularity, it seems very unlikely that the series will come back for a second season. “This is a tight story, which is why I think six hours is perfect,” director Susanne Bier told Entertainment Weekly. “There’s something about six that has a natural arc.” As the publication points out, that doesn’t necessarily mean that the show won’t come back (although, again, it feels unlikely), but that the original series was planned to only have a six-episode arc, full stop.

So until we have more news, sit back, relax and remember: