10 facts on dirt and cleanliness

We're more fixated on hygiene than ever before. But where health is concerned, grime – quit holding your nose – just might be good for you 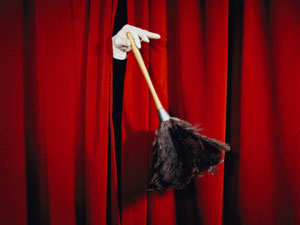 The people we encounter walking down city streets or sitting on subways are showered, mouthwashed and deodorized. We have come to expect this. They eradicate all natural smells; then, onto their odourless bodies, they import carefully chosen scents. These people are listening to their private musical repertoire on their iPods, messaging people on their BlackBerrys or talking on their cellphones. The illusion is that they exist in their own individual, hygienically sealed bubbles.

If you had been born only a couple of hundred years ago, you would have regularly slept in the same bed with your family or co-workers or fellow guests at an inn, emptied your bowels at a public latrine with no dividers between you and the other users, and might expect to be buried in a mass grave. According to the cultural critic Ivan Illich, it wasn’t until 1793 – when the French Revolutionary document “The Rights of Man” championed the right to privacy – that we took a radical step toward sleeping in our own beds and, ultimately, toward dignity.

Privacy and dignity are good things, but it looks as if North America, especially, doesn’t know where to stop. Perhaps above all, it’s about control: To smell like a body – which alters on its own with time, physical exertion, anxiety and climatic and hormonal variations – demonstrates that we’re not completely in charge, something we increasingly expect of ourselves. As more of the world spins out of control, it seems there is a greater drive to manage what we can, however pointless it may be.

Click here to read more from The Dirt on Clean.

Ten facts about dirt and cleanliness you may not have known:

1. People rarely used soap to wash their bodies until the late 19th century. It was usually made from animal fats and ashes and was too harsh for bodies; the gentler alternative, made with olive oil, was too expensive for most people.

2. The accumulated sweat, dirt and oil that a famous athlete or gladiator scraped off himself was sold to their fans in small vials. Roman women reportedly used it as a face cream.

3. Recycling saintly secretions: St. Lutgard’s saliva was believed to heal the sick, as were the crumbs chewed by another medieval saint, St. Colette. A man sent from England to the Netherlands for St. Lidwina’s washing water, to apply to his afflicted leg. The water from St. Eustadiola’s face- and hand-washing cured blindness and other illnesses.

4. Teeth were cleaned in the middle ages and the Renaissance with green hazel twigs and woollen cloths.

5. Austrian peasant men courted by secreting a handkerchief in their armpits during a dance. When it was sufficiently sweaty, they wiped the face of their chosen girl with it – according to folk belief, she would be instantly smitten.

6. 16th century French deodorant: “To cure the goat-like stench of armpits, it is useful to press and rub the skin with a compound of roses.”

7. When John Wesley, the 18th-century founder of Methodism, coined the phrase, “Cleanliness is next to godliness,” he was referring to clean clothes, not bodies.

8. Listerine was invented as a surgical antiseptic and, without changing its formula, morphed over 40 years into an oral antiseptic, astringent and astonishingly successful mouthwash.

9. Kotex sanitary napkins began life as wood-fibre bandages for soldiers in World War One. The battlefield nurses used them as sanitary pads.