The reno files: How to light a really big room

Last week the Philips lighting people put together a really interesting event with decorator and stylist Samantha Pynn as the host. The main focus was Philips’ LED light bulbs, which I have to say are kind of revolutionary. 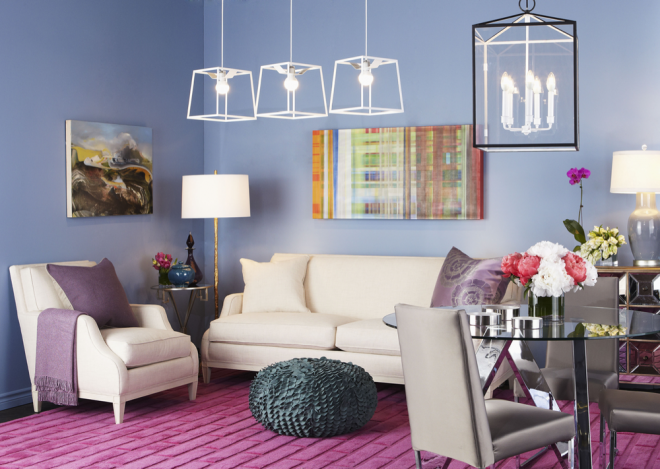 Last week the Philips lighting people put together a really interesting event with decorator and stylist Samantha Pynn as the host. The main focus was Philips’ LED light bulbs, which I have to say are kind of revolutionary. I’ve never been a big fan of CFLs, and have to confess thoughts of stockpiling, even warehousing incandescent bulbs, for the time when they will be phased out completely. It’s like prohibition, as far as I’m concerned. I see big light bulb trafficking in the future. (Have I been watching too much Boardwalk Empire?)

But this event kind of changed my mind—their bulbs are really amazing, and when you start layering lighting throughout the room, using their various technologies, you end up with something that actually comes very very, very close to the warmth and beauty of incandescents, with an environmental advantage that can’t be denied.

This is the room she designed, although I have to say this photo does not do it justice, the lighting was much, much softer….

Plus, their bulbs will last over 20 years. That solves my whole dilemma of how to change the light bulbs in whatever lighting I end up using for the new family room.

Here’s the problem for that one: The ceiling is going to be about 18 feet high, but the room is only about 18 feet deep (and say “only” because I’m talking proportion here, it’s actually a big room!), by 16 feet. So proportionally, that’s quite awkward. One way to get around that is to have wooden ceilings. First of all, I love the 70s vibe it’ll lend to the room, and second of all, it will bring the ceiling down, visually.

The big problem then is how to light a room with such high ceilings.

My first thought is pot lights, but really, how much good are they going to do 18 feet up in the air. The solution is to have them strategically placed around the perimeter to light up art, bookshelves, drapes and whatever else is going to go on the walls. There’s something modern and simple about that that really lets the architecture of the room speak. That’s how they lit the room in the inspiration shot above.

The second thought is two big chandeliers- and that begs the question what kind of chandelier, since they will be visible from the second floor balcony.

One thought is to go big, regency style- a la Kelly Wearstler. Not sure my hubby would dig it though.

Another is to go kind of industrial:

Here’s one by Ingo Maurer at Klaus.

Here’s one by Toronto’s Commute Home.

Another option is to group smaller pieces, in a Tom Ford kind of way.

As you can see, I’m all over the place, stylistically! I’m kind of leaning to the Commute Home ones—I think the black lines will mirror the detail of the two-storey wall of windows in that room. It’s divided up with a black grid.

The third thought is lots and lots of floor and table lamps.

Truth be told, it’s going to be a layering of all three. Layering light is the key to creating warmth and ambiance. And with Philips long life bulbs, I won’t have to even think about changing the bulbs; there’s no way I’ll ever commit to a house for 20 years!