The reno files: Four things that make a perfect kitchen

A quick recap: ten days ago, my husband, two kids and guinea pig moved into a rental apartment while we wait for our house to be completed. This is the current state of our house: 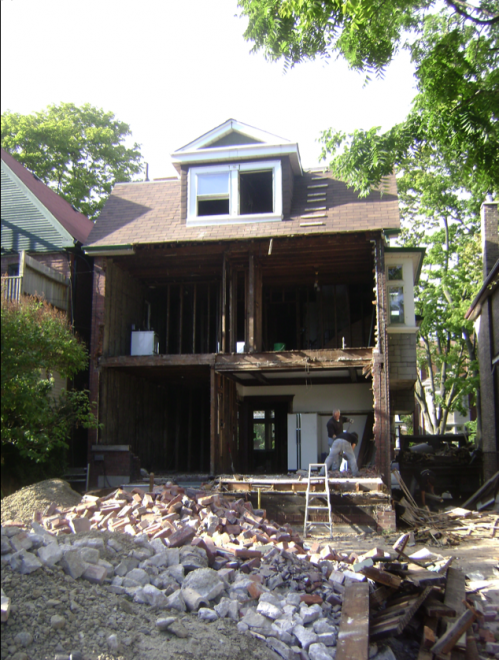 This is how I spend my evenings:

A quick recap: ten days ago, my husband, two kids and guinea pig moved into a rental apartment while we wait for our house to be completed. This is the current state of our house:

Looks like we’ll be homeless for a while. I’ve picked up a few tricks about living in a tiny space, but more on that later.

Let me explain. The kitchen is open to the dining room, separated by an island. I love the idea of the openness of it all, but I also like the formality of a dining room, and worry about sitting in the dining room and feeling like I’m in the kitchen. So instead of having a counter with an overhang and stools, the back of the island will be a solid piece of white marble that will come up six inches above counter height so that when you’re sitting, you don’t see the mess on the island. This is controversial already, since the usual thing to do is to put a bunch of stools there. I just don’t love the look of stools and chairs in the same room.

The real problem though is that in my head the kitchen would be made up of two pantry walls, an island and a stretch of counter. I don’t want uppers, and I don’t want a giant, industrial stove with a huge vent. I want a kitchen that disappears when I’m sitting. But a good kitchen is one that works well.

Here is what makes a good kitchen:

1. A kitchen has to have a working triangle. That means that if you draw a line between the stove, fridge and cooktop (or stove), you should end up with a triangle. And truly, this is the one rule you should not violate.

2. The space you use the most in a kitchen is the space between the sink and the stove.

3. If you are right handed, that space should be to the right of the sink.

4. A sink or a stove in an island does not work well unless it’s a huge island with a lot of room on either side.

So knowing these four things, I spent hours playing around, trying to come up with enough storage space for my millions of dishes ( I think I own over 100 different bowls!), a fridge, a microwave, a wall oven, a cooktop, a sink and a dishwasher in a space that is essentially 9×12, and not have any uppers. End result? It can’t be done.

So after a lot of heartache, I decided to move the powder room that was supposed to be next to the kitchen to the front of the house (and sacrifice storage in the front hall) to gain an extra five feet in the kitchen. I also had to compromise one of my pantry walls. The sink is going to have to be in the island. I’m not thrilled about it, but I’ve made sure there is enough room beside it (to the right of it) so that I can chop veggies there. Lastly, I’ve had to say goodbye to the wall ovens in favour of a range, and yes, a hood. I will have to design that hood in such a way that it doesn’t look like a commercial kitchen….. Stay tuned!