With fresh eggs, flowers and a three-acre backyard, a family of former Torontonians has found joy in rural life. 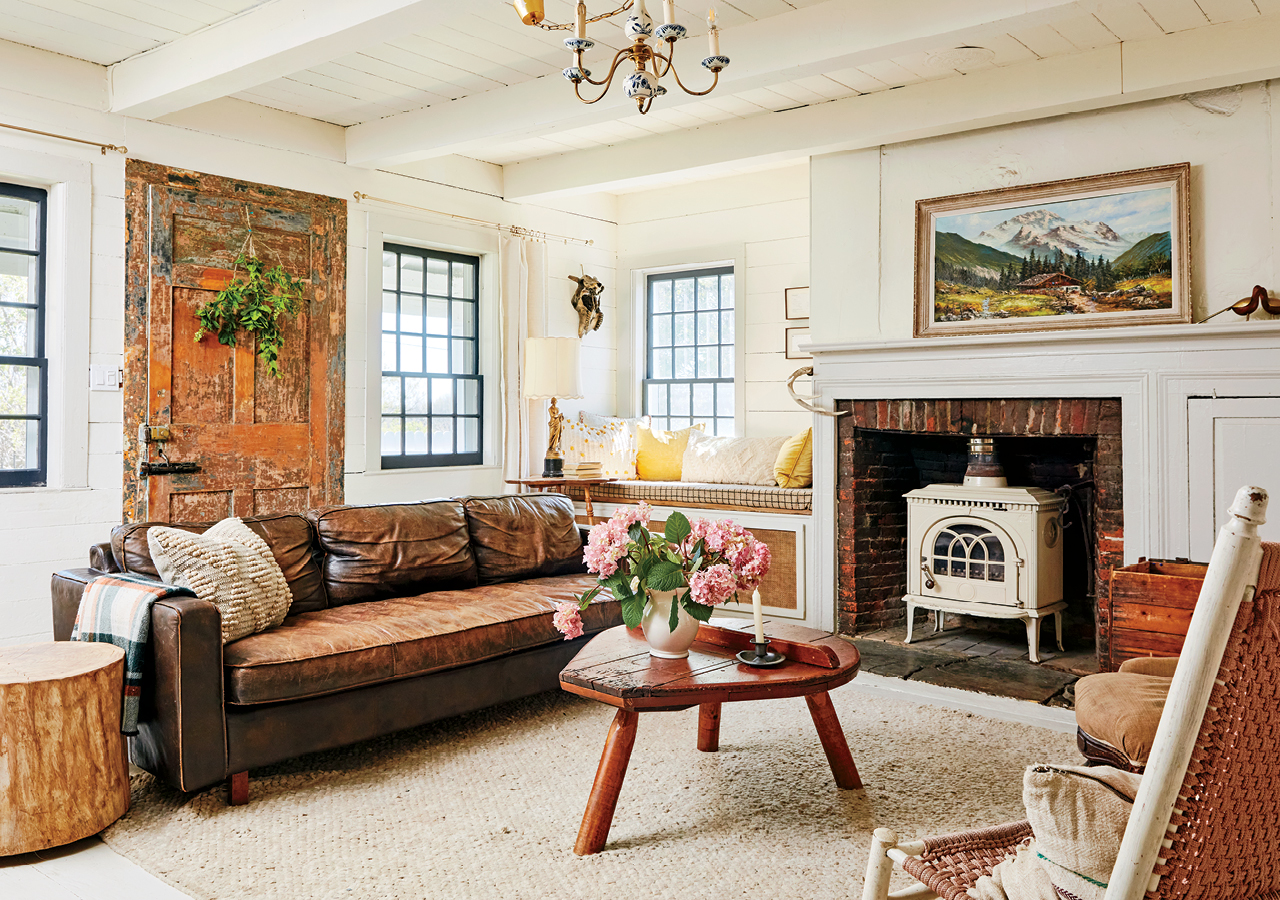 In the living room, a weathered door leads to the porch. Kate built the rattan daybed in the corner and made cushions for it. “It was our first pandemic building project,” she says. “It’s our favourite hangout spot in the house.” (Photo: Carmen Cheung)

When she first saw the listing for her 1805 farmhouse in Bath, Ont., Kate Crothers Little felt like she had stumbled upon a set for Little House on the Prairie. Quaint antique tea things were on a table, a pot dangled from a cast iron arm over an open fireplace and an old-timey rifle was by the door, in case someone needed to chase down dinner. “The previous owner, an antiques dealer, had it staged as a pioneer village house. It looked like a museum,” says Kate, an interior designer who runs the eponymous design firm Kate Crothers Design. “My husband said to me, ‘We can’t raise four kids in an oversized dollhouse.’ ” 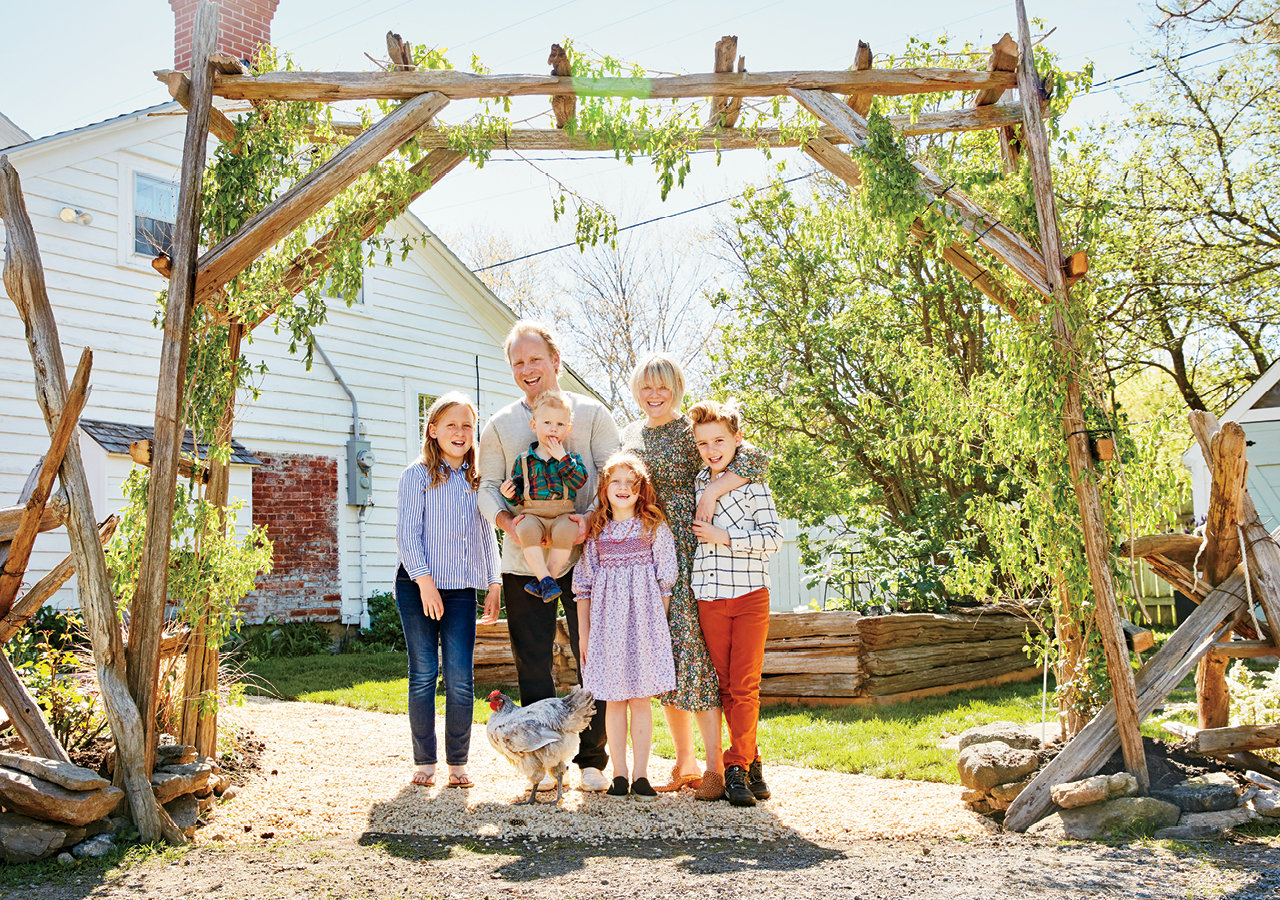 At the time, the family—Kate; her husband, Noel; their four children, Maeve, 10, Charlie, 8, Hazel, 6, and Augie, 2; and Rigby, their golden retriever—was living in a small rental apartment in Toronto’s Roncesvalles neighbourhood. Prompted by rising rents and impossible house prices, Kate started to dream about moving back to the country; she and Noel both grew up in Campbellford, about 85 kilometres northwest of Picton, the heart of trendy Prince Edward County, but were up for any rural locale. “My husband and I spent our childhood roaming free,” says Kate. “In the city, kids have limited freedom.” 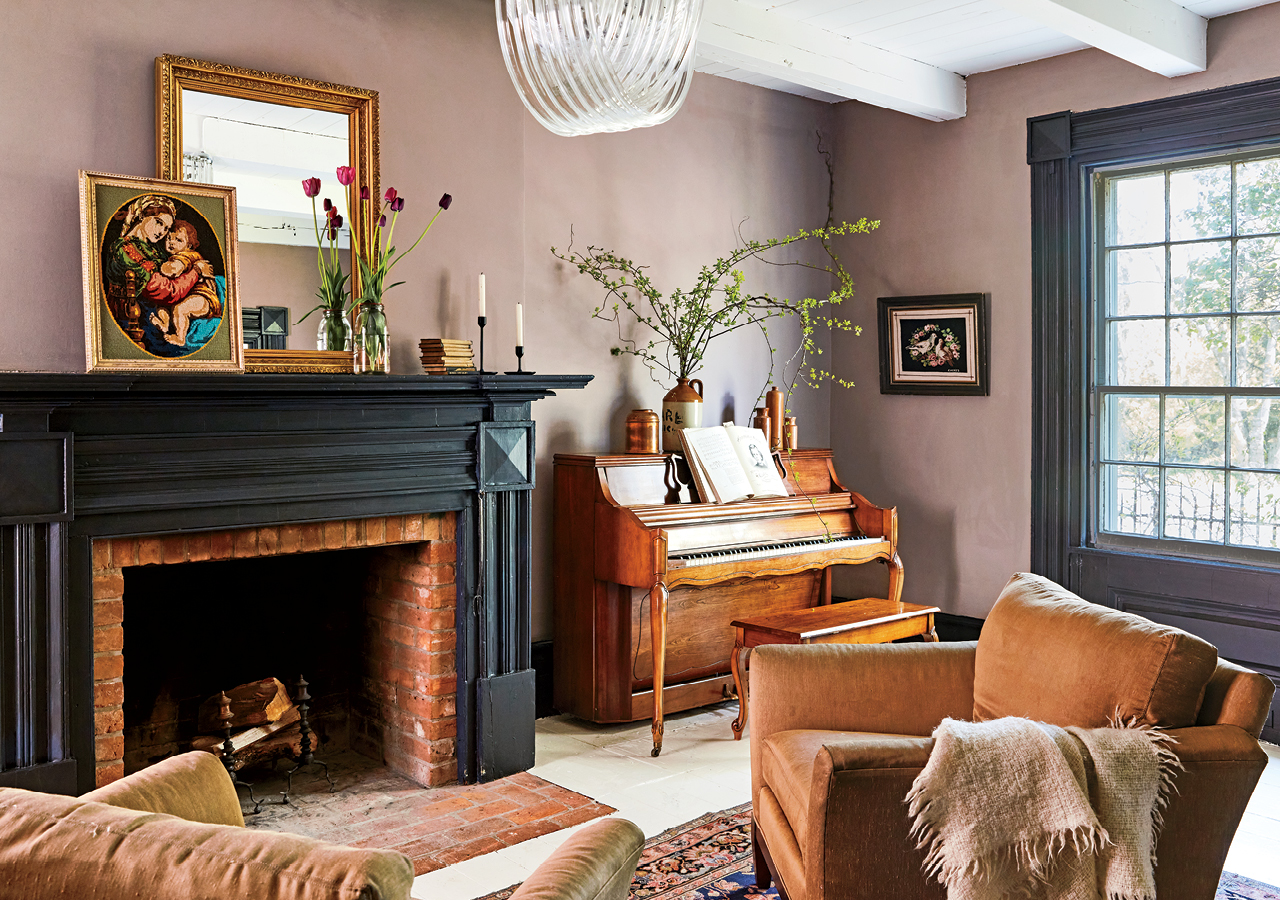 The farmhouse exudes welcoming, lived-in comfort, from the cushy chairs to the tulips and branches foraged from right outside the door. The piano isn’t purely decorative—the older kids all play. (Photo: Carmen Cheung)

In 2019, they took possession of the 2,000-square-foot white clapboard house, which happens to be just 40 minutes away from their childhood hometown. “The kids tore through it, and all of the china started to shake,” laughs Kate. “They immediately broke the antique doors that were not meant to be used.”

With five bedrooms, the storey-and-a-half structure set on three acres of land is palatial compared with their city digs. “Our property backs onto 50 acres of hiking trails with a stream,” says Kate, who has since welcomed a fat black cat named Tuck, two ducks and 13 chickens. The family built a coop so they can enjoy farm-fresh eggs every day. The kids have taken to the Silkie chickens, a fluffy, docile breed happy to receive clumsy cuddles. “It has been lovely to see my kids come into their own,” says Kate. “They help feed the chickens, catch them and put them away; they dig up worms for them. They have no fear.” 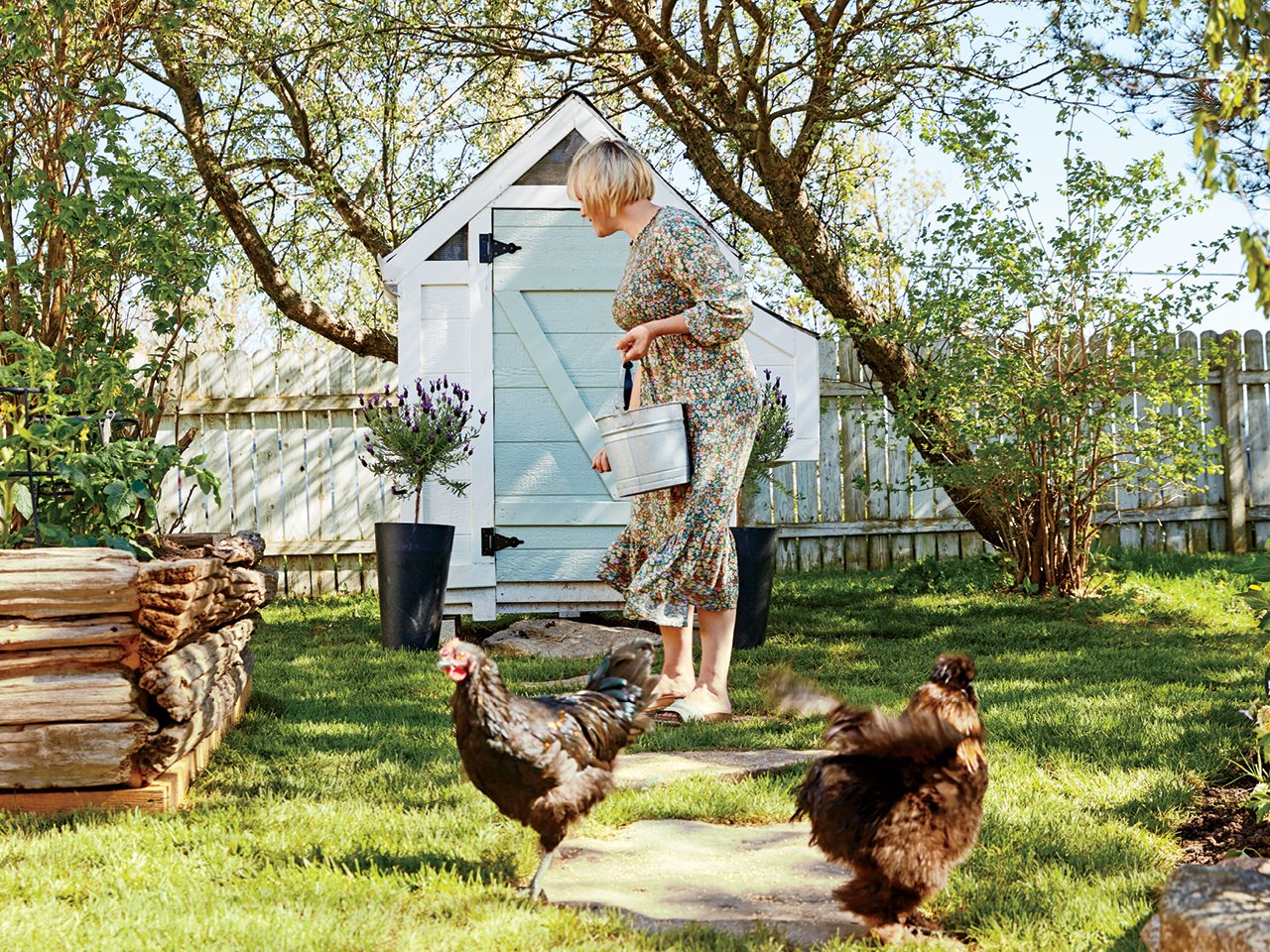 Kate has also realized her dream of having a cut-flower garden: The 40-by-60-foot plot bursts with cosmos, snapdragons, sunflowers, delphiniums, peonies, dahlias and zinnias. “The kids arrange and sell bouquets on the roadside in the summer.”

But it isn’t all rosy in the country, admits Kate. “I miss being able to walk to the grocery store. The closest one is 10 kilometres away,” she says. “I even miss public transit.” 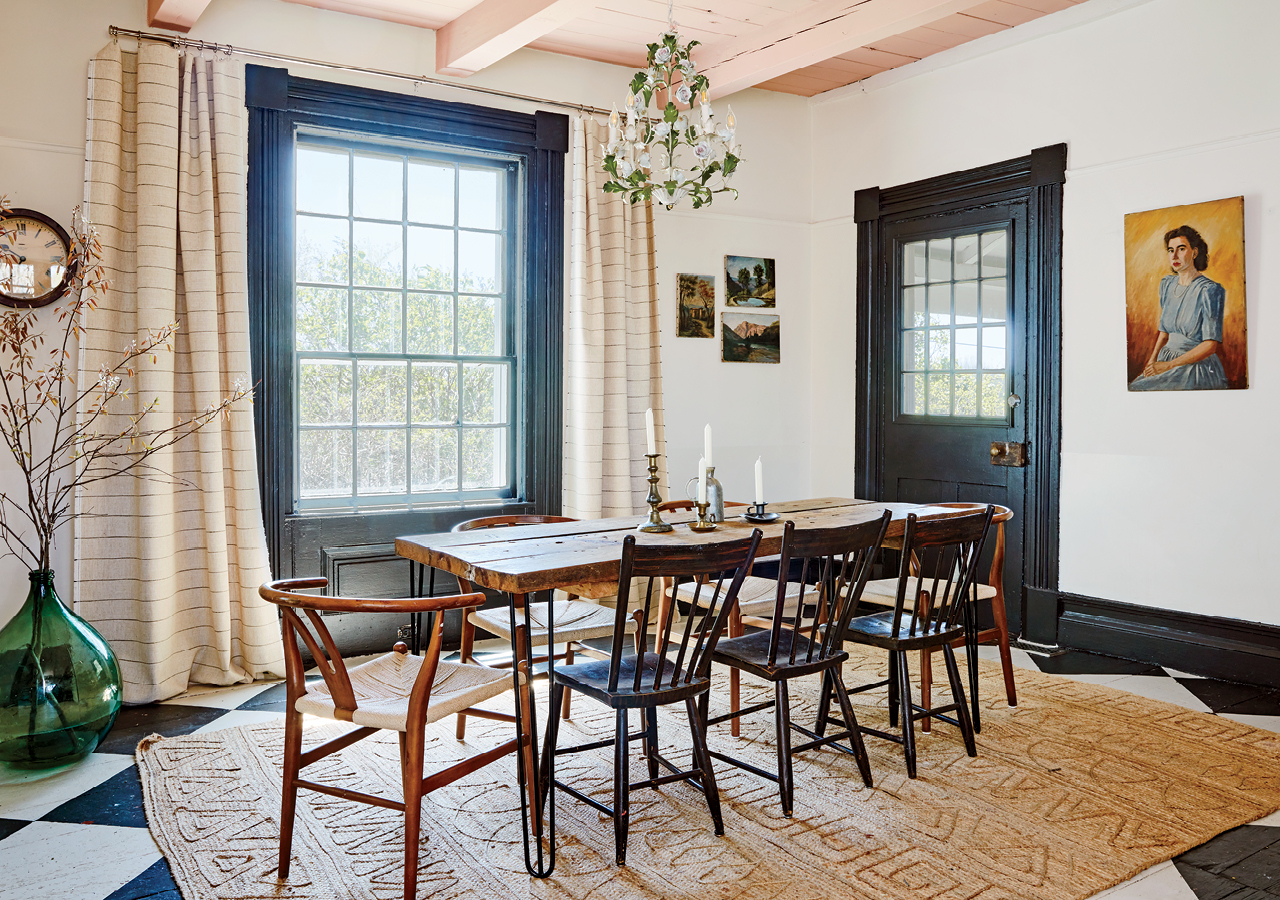 The vintage oil portrait from 1948 that hangs in the dining room is an Etsy find, shipped from the U.K. The family named her “Claudette.” (Photo: Carmen Cheung)

That said, the property is a great escape. Indoors, fresh white paint covers previously dark-blue and mustard shiplap walls. Vintage treasures (largely inherited from Kate’s grandmother Margaret, a major design influence) and clever DIY projects (like the painted diamond-pattern pine floor in the kitchen) make for a character-filled home. “It brings a sense of playfulness, which I think is important in a living space,” says Kate. 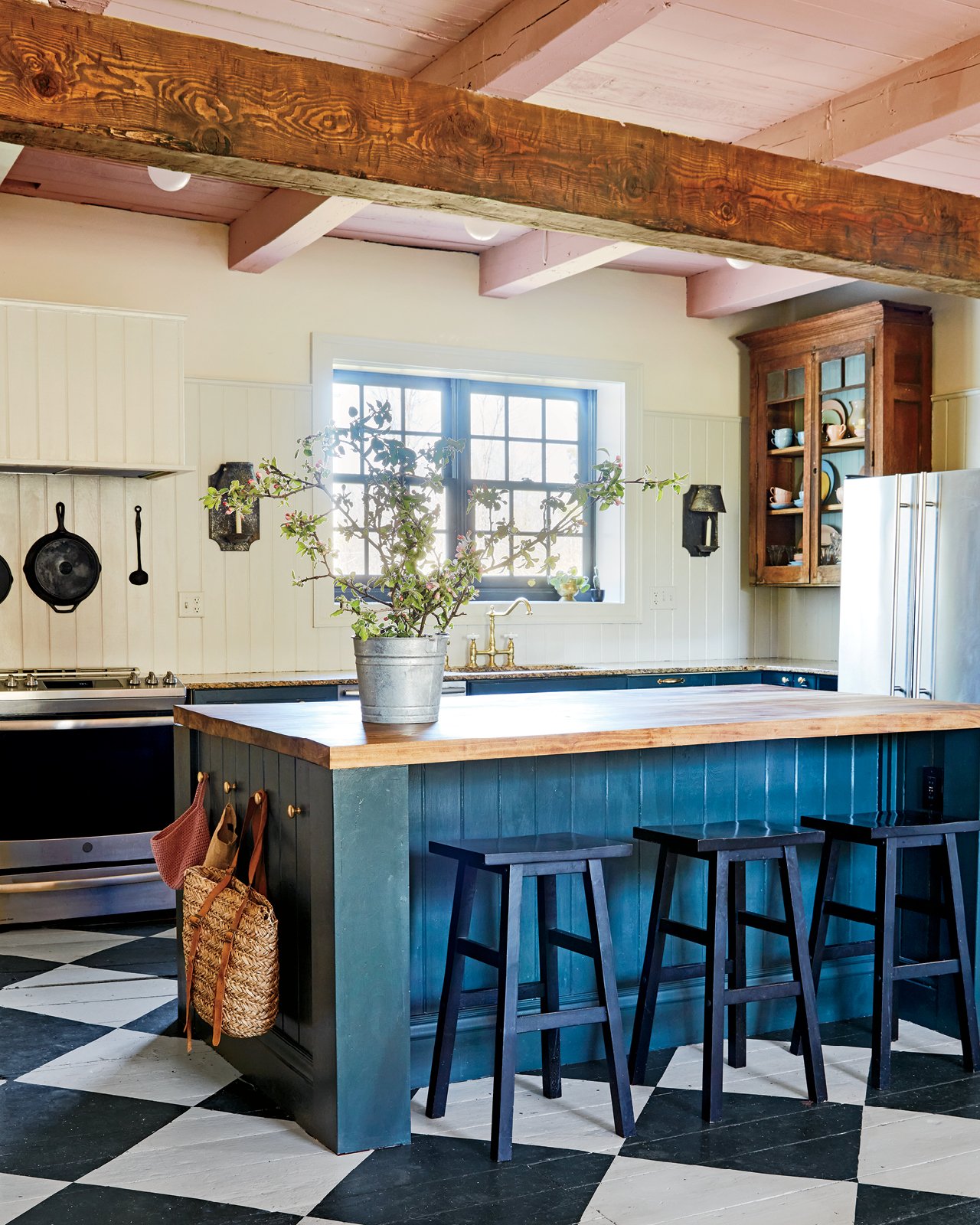 The soulful kitchen was created out of a mix of old and new materials. Kate removed the upper cabinets, painted the lowers in Farrow & Ball’s Studio Green and asked contractor Adam Dalgarno to build an island out of a dead poplar tree found on the property, tucking in Ikea drawers below it. Reusing old things is in Kate’s blood. “My grandmother was a real history buff and antiques collector. She valued well-made, beautiful items,” she says. 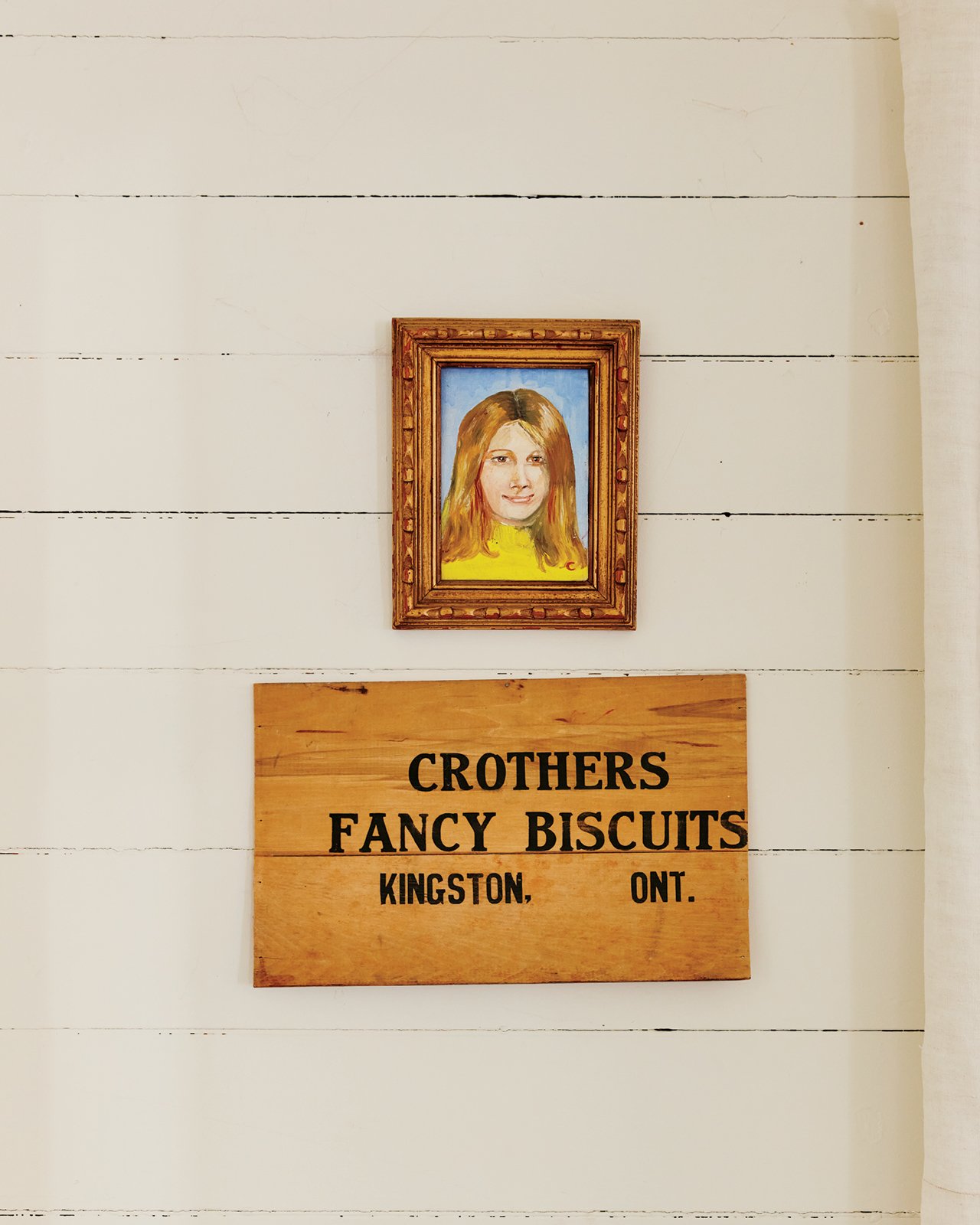 Kate’s grandmother painted the picture of Kate’s mom. “Both have passed, so it’s extra special,” she says. The wooden sign is from Kate’s great-grandfather’s biscuit factory in Kingston, Ont., which has since closed. (Photo: Carmen Cheung)

Slow living is to be cherished: “I didn’t realize how lucky I had it growing up. I wanted my kids to have that experience.” At first, Kate says the children were shell-shocked by the freedom—they used to complain they were bored. “It’s taken them a year to realize that our entire property is their playground.”