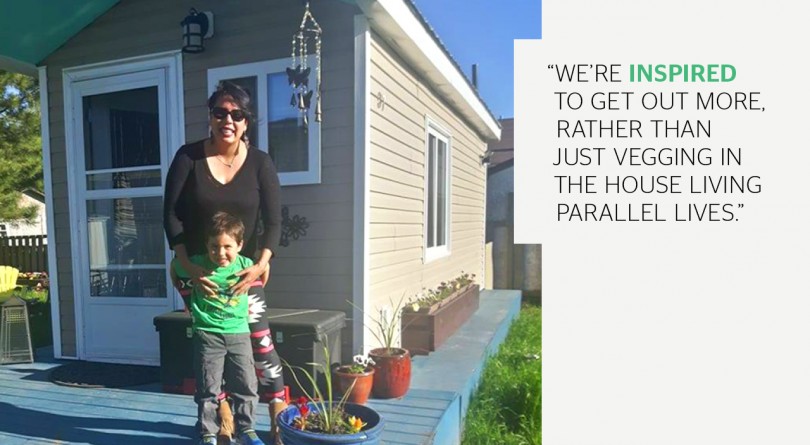 Could you live in a 160-square-foot “tiny house” with your five-year-old? (Could you for real? Watching Tiny House Nation is one thing, but living in a space the size of some suburban bathrooms is quite another.) Holly Kondreska took the plunge when she and her five-year-old son, Emmett, moved into a super-compact home in Thunder Bay, Ont. She absolutely loves the small life. But what do they do with the artwork, cereal, soccer gear, plastic cars, stuffies, shoes, loot bag treats and other stuff that seems to come with kid life? Don’t they get a little stir-crazy living in such close quarters?

Here’s an inside look at life in a real-life tiny house. 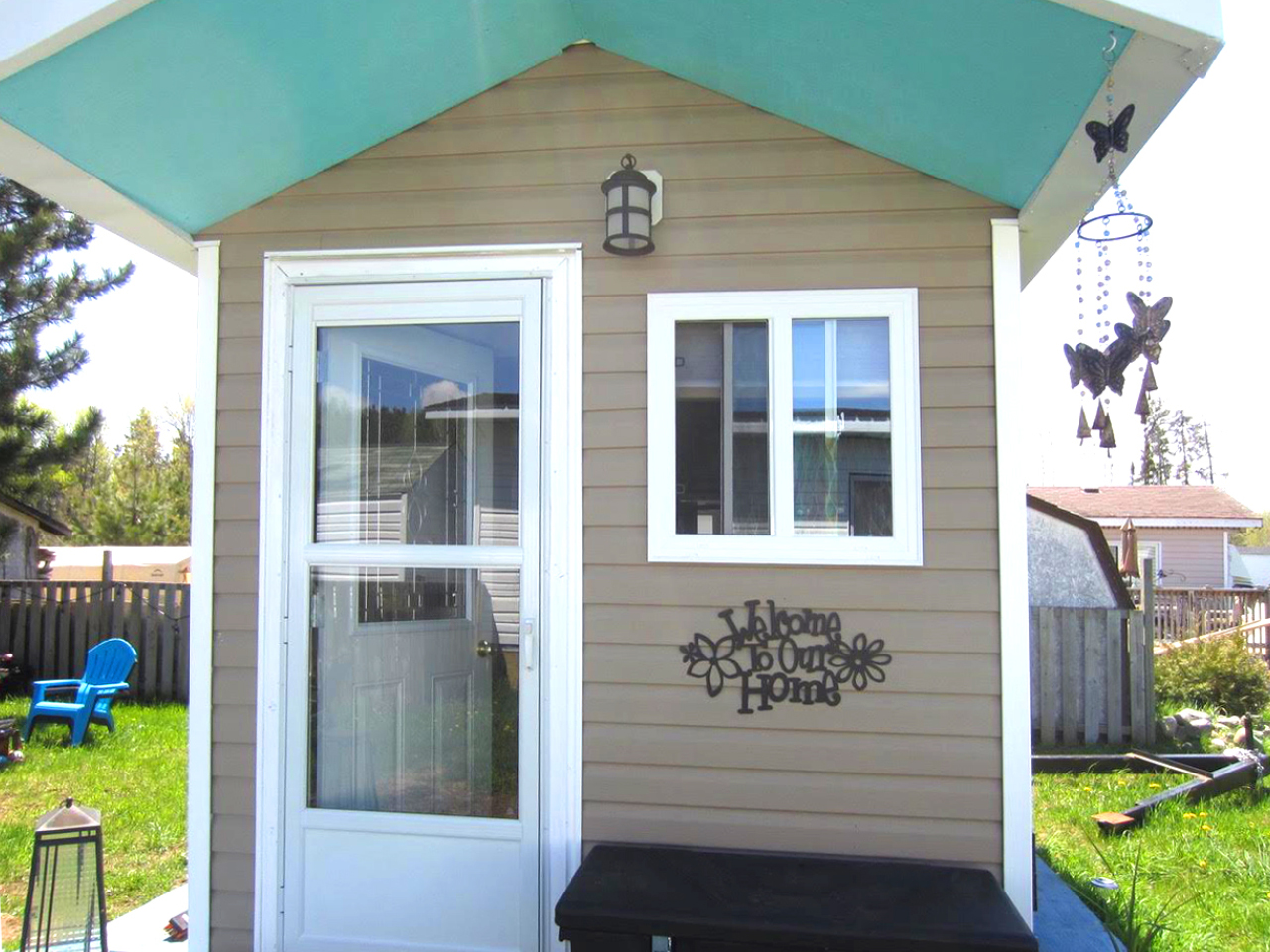 Holly’s former home was a 1,500-square-foot two-storey house. “I’ve wanted to downsize for a long time,” she says. “I like the concept of living with quality items as opposed to quantity items.” An opportunity presented itself last year when she and her husband separated, and she gleefully jettisoned furniture, clothes and small appliances through a yard sale, Kijiji ads and giveaways. “Now, I feel like I’m more in touch with what I own,” she says. “People thought I was going to go crazy living in such a small space, but I feel like I took the crazy out by doing this.” 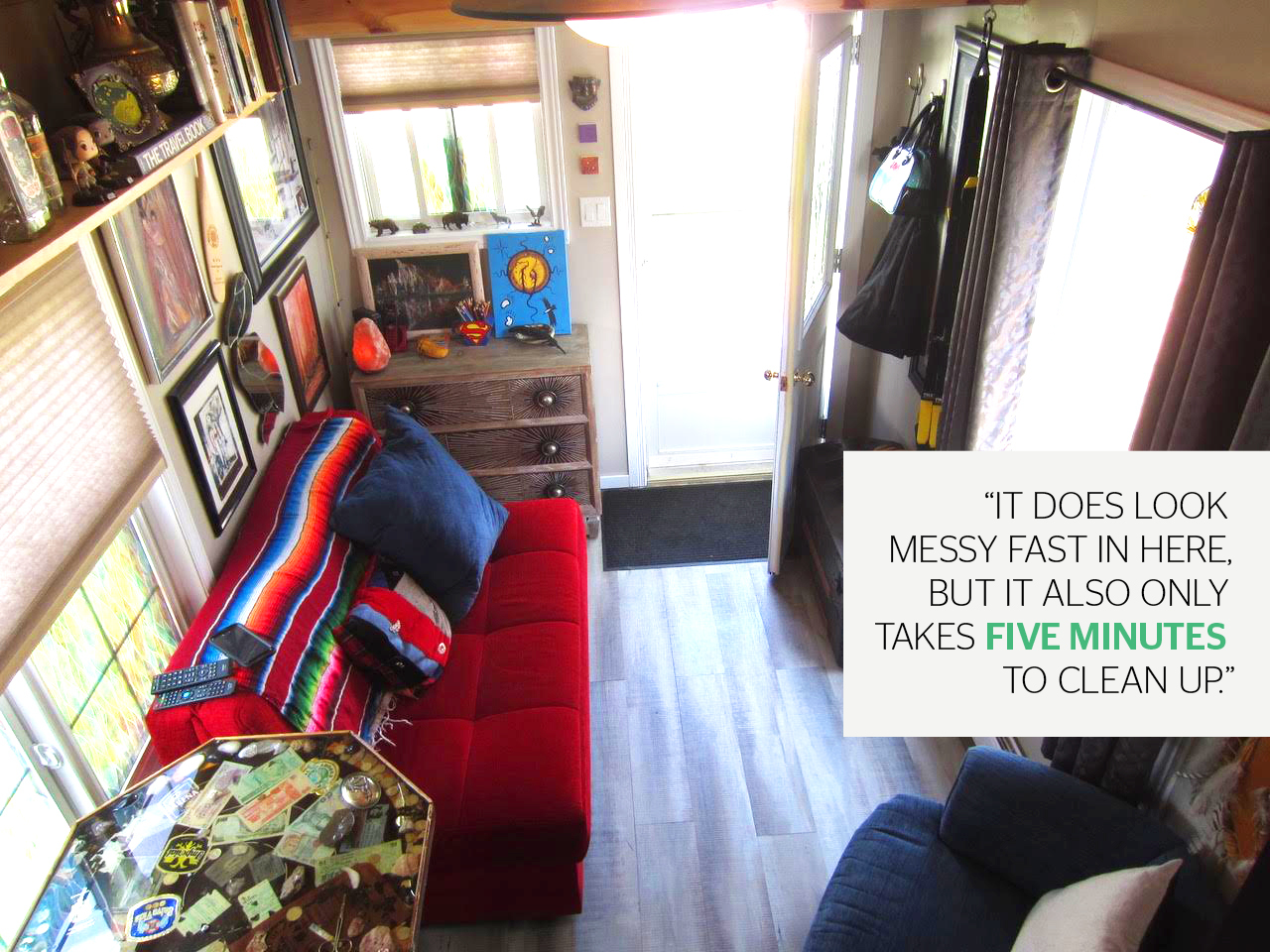 Besides avoiding the huge-pile-of-shoes-by-the-door arguments, her mother-son relationship has become more tight-knit, too. “I’ve always had a good connection with Emmett,” she says, “but now I find that we’re even more in tune with each other’s moods. You just pick up on each other’s tone of voice when you’re in the same space like this.” 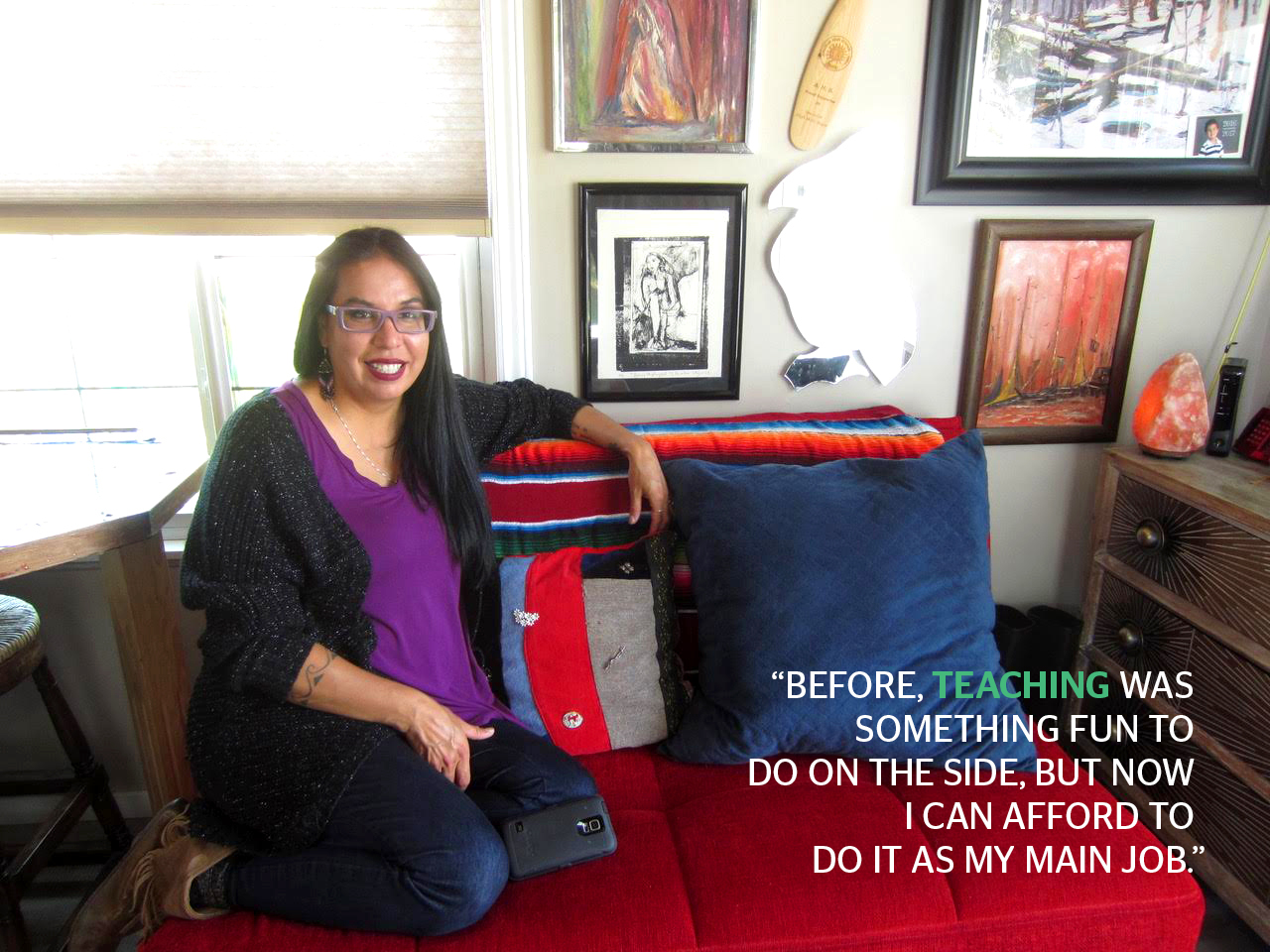 The house is 20 feet long and eight feet wide, with 10-foot ceilings. Holly had the shell custom-built by a tiny-house builder in southern Ontario, and then she and a friend drove down with a truck and a flatbed trailer to transport it to a mobile-home park just north of Thunder Bay. Holly, her parents and her friends completed the interior themselves. She used some of her savings and paid for the house in full (no mortgage!), and her utility bills are a third of what they were in her previous house. Gaining that kind of financial independence has meant that she has been able to pursue some big life dreams. After 15 years as a paramedic, Holly started her own business teaching wilderness first aid, and she also teaches life-skill courses at remote Indigenous communities. “Before, teaching was something fun to do on the side, but now I can afford to do it as my main job,” she says. 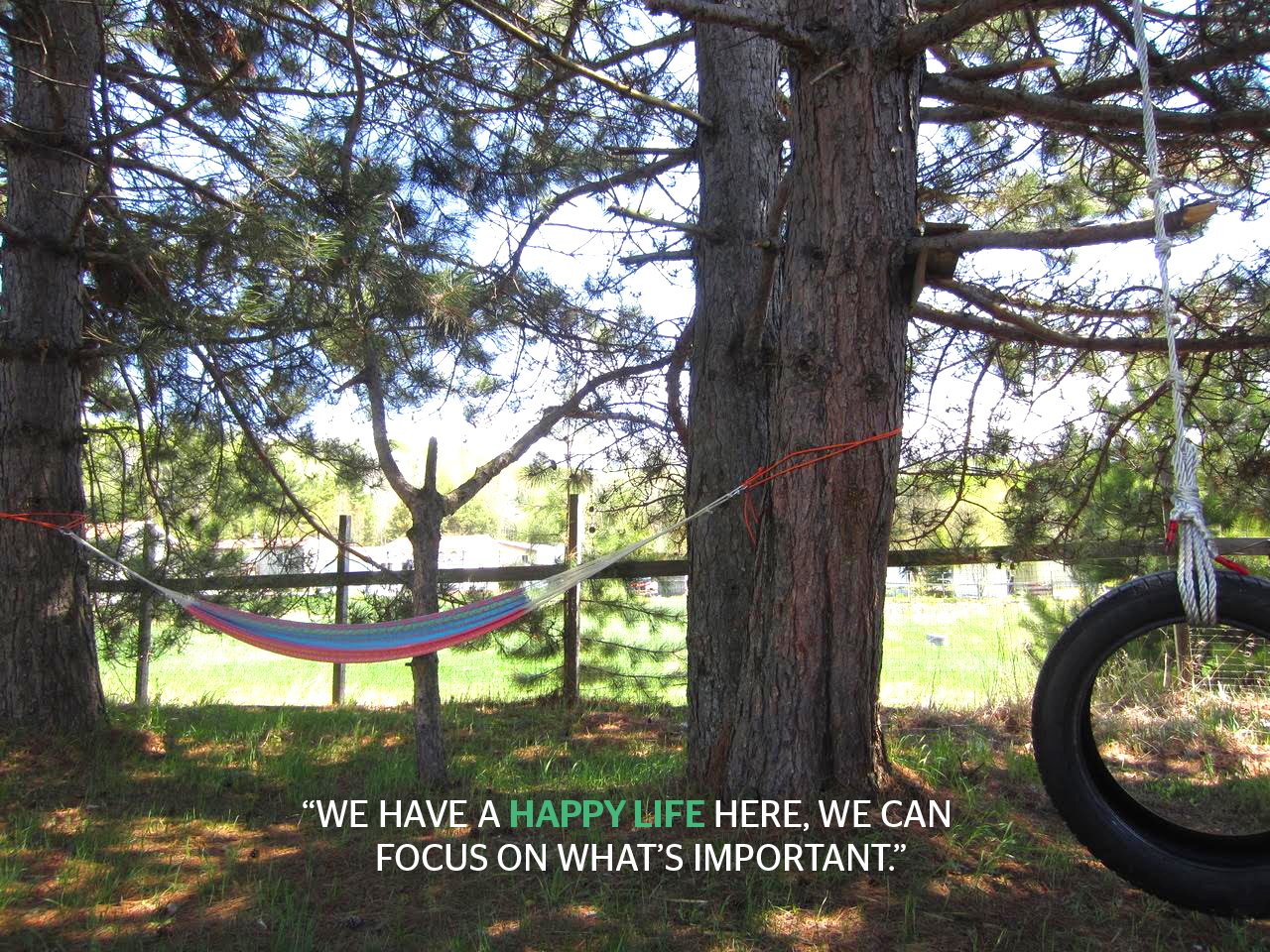 With plenty of trees, a pond for swimming and fishing, and playground equipment nearby, Emmett and Holly spend a lot of time outside. They recently picked up some old pots and pans at the thrift store, and Emmett has been busy making mud creations with them in the yard. Last winter, they built an enormous snow fort. “We’re inspired to get out more rather than just veg in the house, living parallel lives,” she says. “We have really good playdates with friends, we go out to eat, and we’ll go on a spontaneous road trip for the day.” 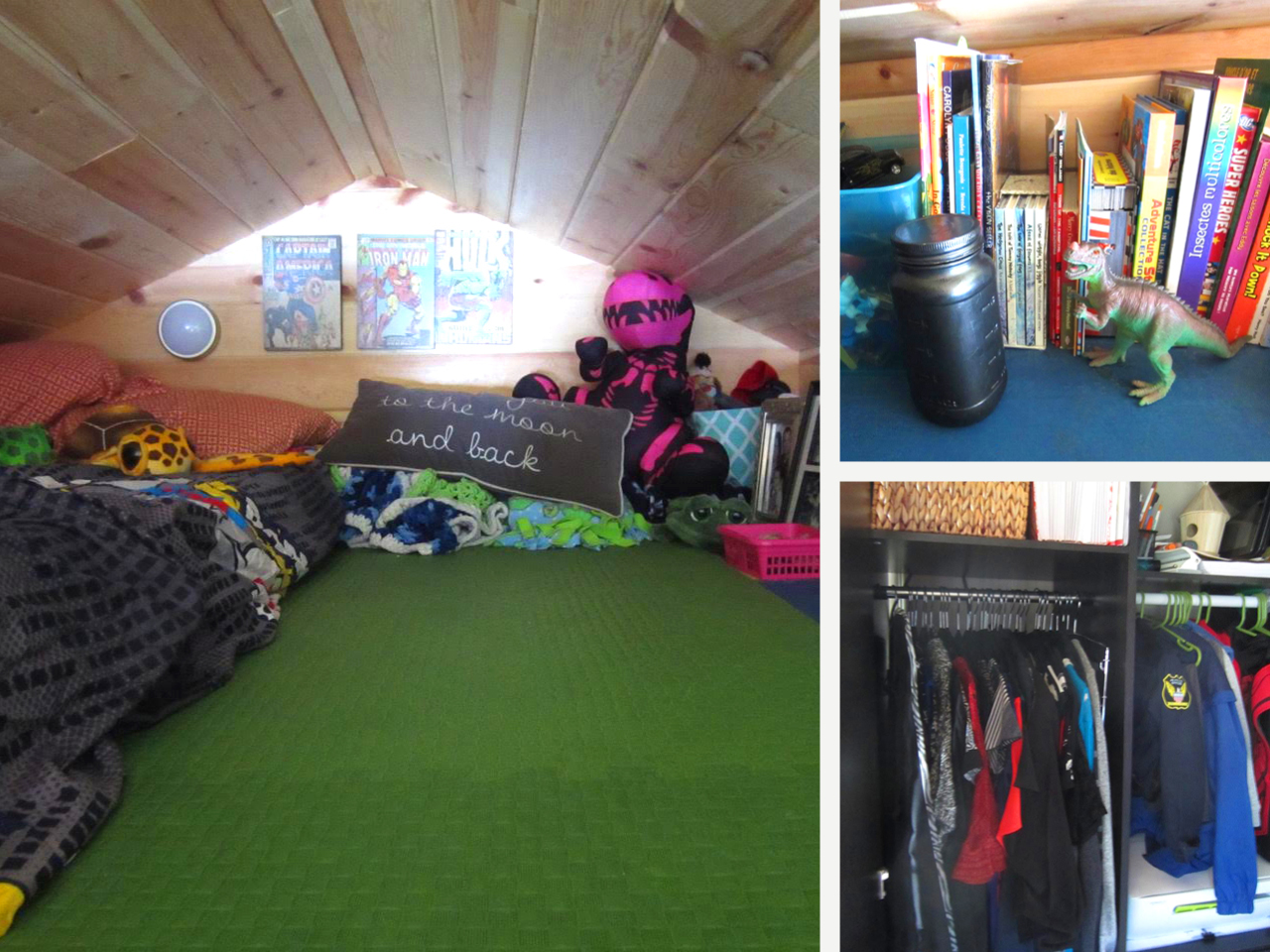 Emmett says his favourite thing about living in a tiny house is that it’s like living in a fort. (Least favourite: “No Nerf gun fights inside.”) His six-by-eight-foot sleeping loft is a pretty cool hideout and, yes, he gets to climb a ladder to get up there. He shares the space with his tortoise, Lemon Smash-Hulk, who hangs out in a box at the foot of his bed. Luckily, he is fine with having fewer toys. When he is tired of the ones he has, he gathers them up and announces that it’s time to go to the thrift store, where he’ll trade them in for new-to-him stuff. (Emmett also spends about a third of his time at his dad’s, where he can build big Lego kits and race cars.)

Do fewer toys mean a bored kid? “It’s OK for kids to be bored sometimes,” says Holly. “Boredom sparks creativity and imagination!” Emmett is also a sound sleeper, so it’s no problem for Holly to, say, make popcorn or watch a movie after he zonks out. On the to-buy list: blackout blinds to darken the space because there’s no bedroom door to shut. 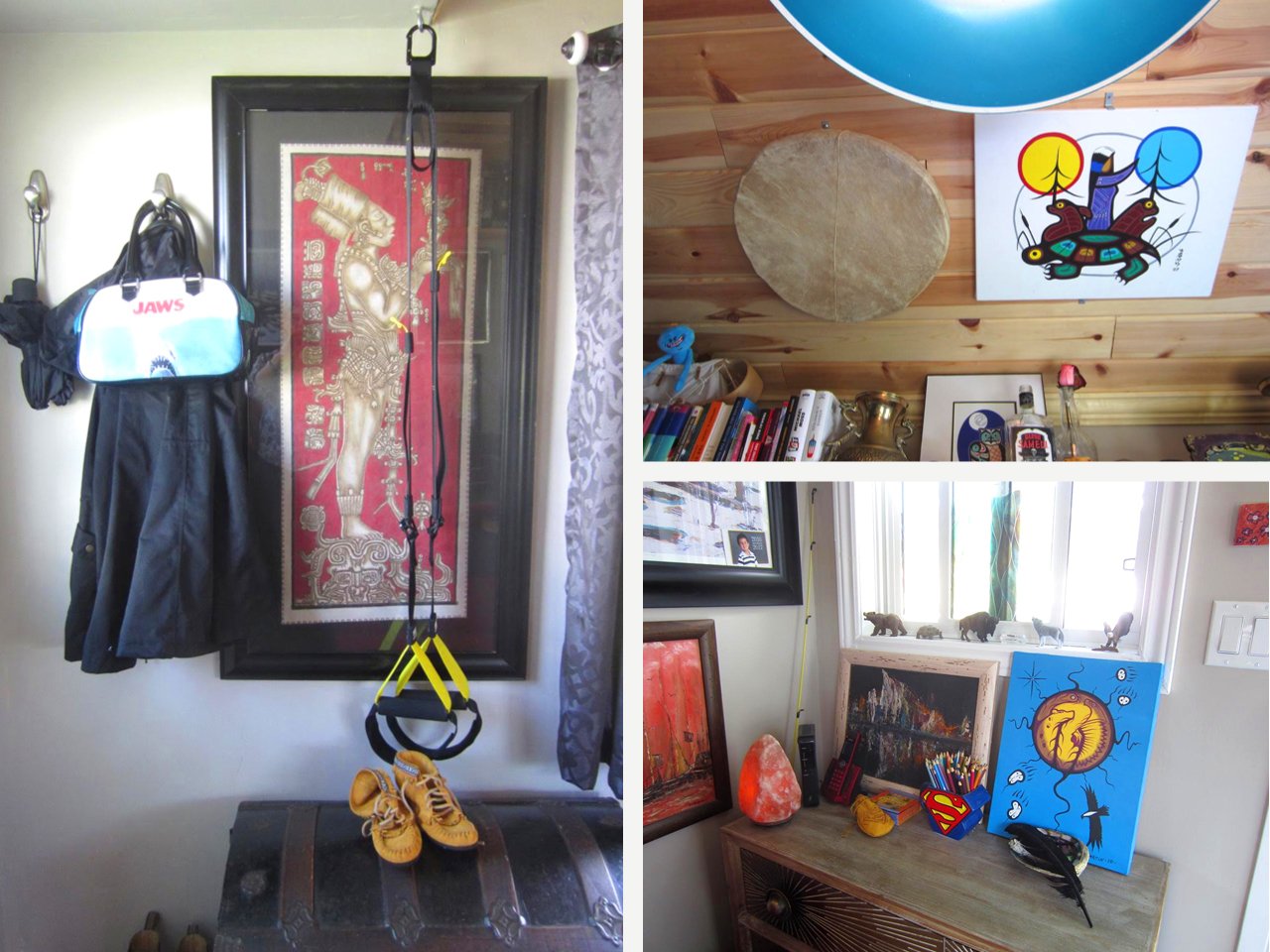 With art affixed to the tongue-and-groove ceiling and quirky mementoes and accents throughout the space, Holly and Emmett’s house is packed with personality. Everything is meaningful, like the prints, ink sketches and paintings Holly has purchased on travels around the world, a Dene drum crafted near where she was born, and cherished books. Emmett’s artwork gets rotated on and off the fridge and sometimes goes in its own frame. Holly made a fold-down table using her parents’ old crokinole game board, filling the surface with coins, shells and trinkets from her travels (plus the scissors used to cut Emmett’s umbilical cord and his newborn hospital bracelet) and covering it with layers of clear epoxy.

Holly says that she has always been a neat freak, so paring down and keeping things tidy is second nature to her. “It looks messy fast in here, but it only takes five minutes to clean up,” she says. 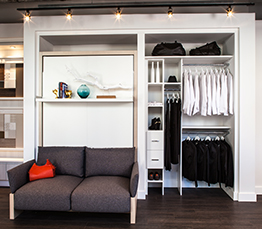 She has found ways to make the most out of every inch. The couch has storage underneath for her bedding and folds flat into a double bed. Clothes and towels go in the dresser, as well as a small closet area opposite the kitchen that also holds her printer and files. Winter boots, shoes, snowshoes and Holly’s scuba-diving gear fit into a cubby above the door, and the chest stores coats and toilet paper.

The kitchen area has an apartment-size fridge and freezer, a hot plate, a slow cooker, a microwave and toaster oven and a Euro-style washer-dryer combo that fits under the counter. Food storage isn’t really an issue, says Holly, because, aside from cereals and school snacks, she cooks from scratch and doesn’t need packaged, processed items that take up space. (She admits that it’s hard to keep her mom from bringing over bulk packages of paper towels and tissues, though.) 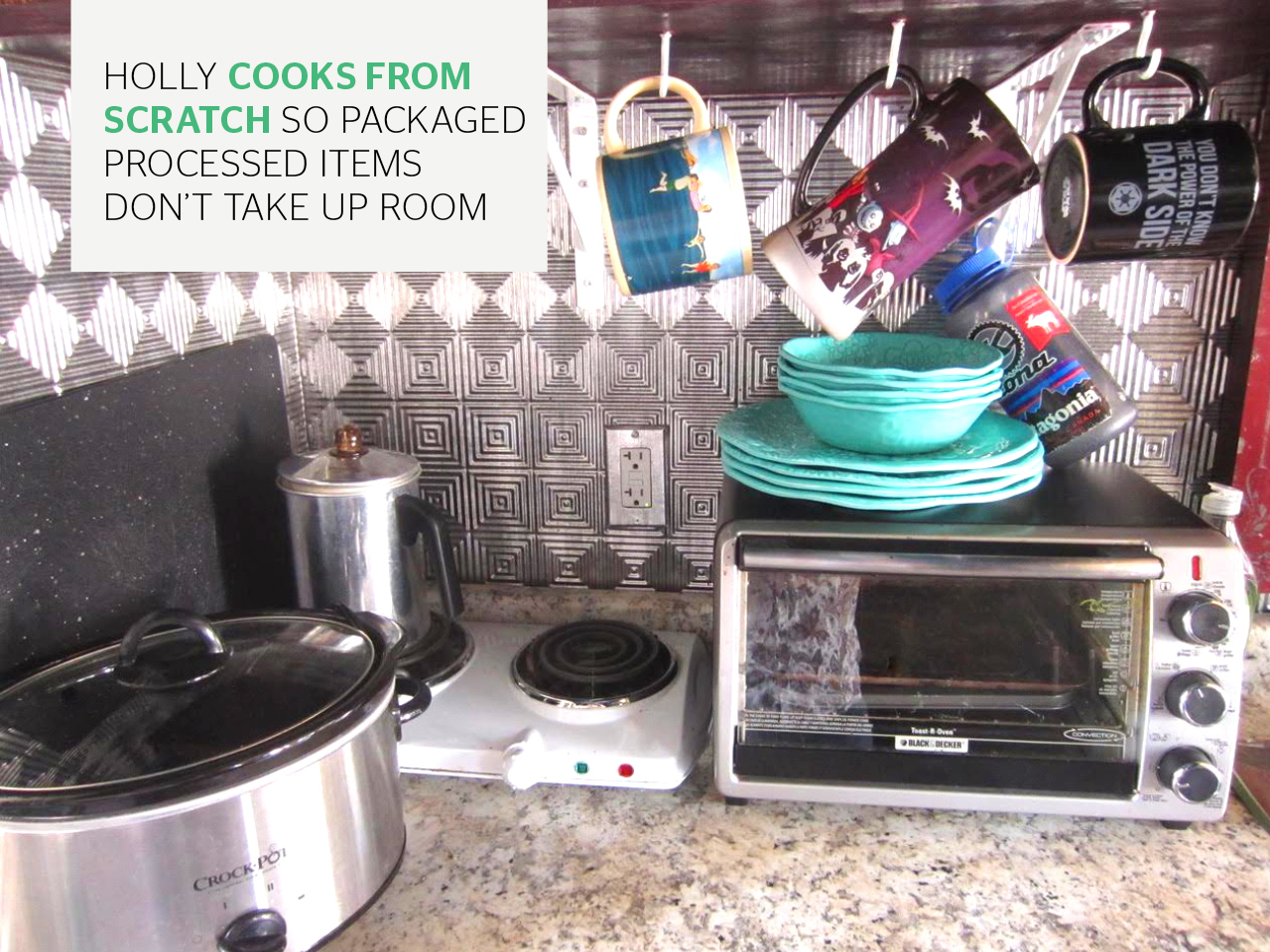 Holly picked up the deep metal tub at an agricultural supply store. It’s far deeper than other mini-models and reminds her of a Japanese soaking tub. Next year, she plans to go off the grid, with a high-tech compostable toilet, solar panels for the roof and a teeny “mariner’s stove” that burns small sticks of wood and is typically used on boats. Having a smaller environmental footprint, using fewer resources and living a less consumer-driven life with Emmett played a part in her decision to go for the tiny house, too, she says. 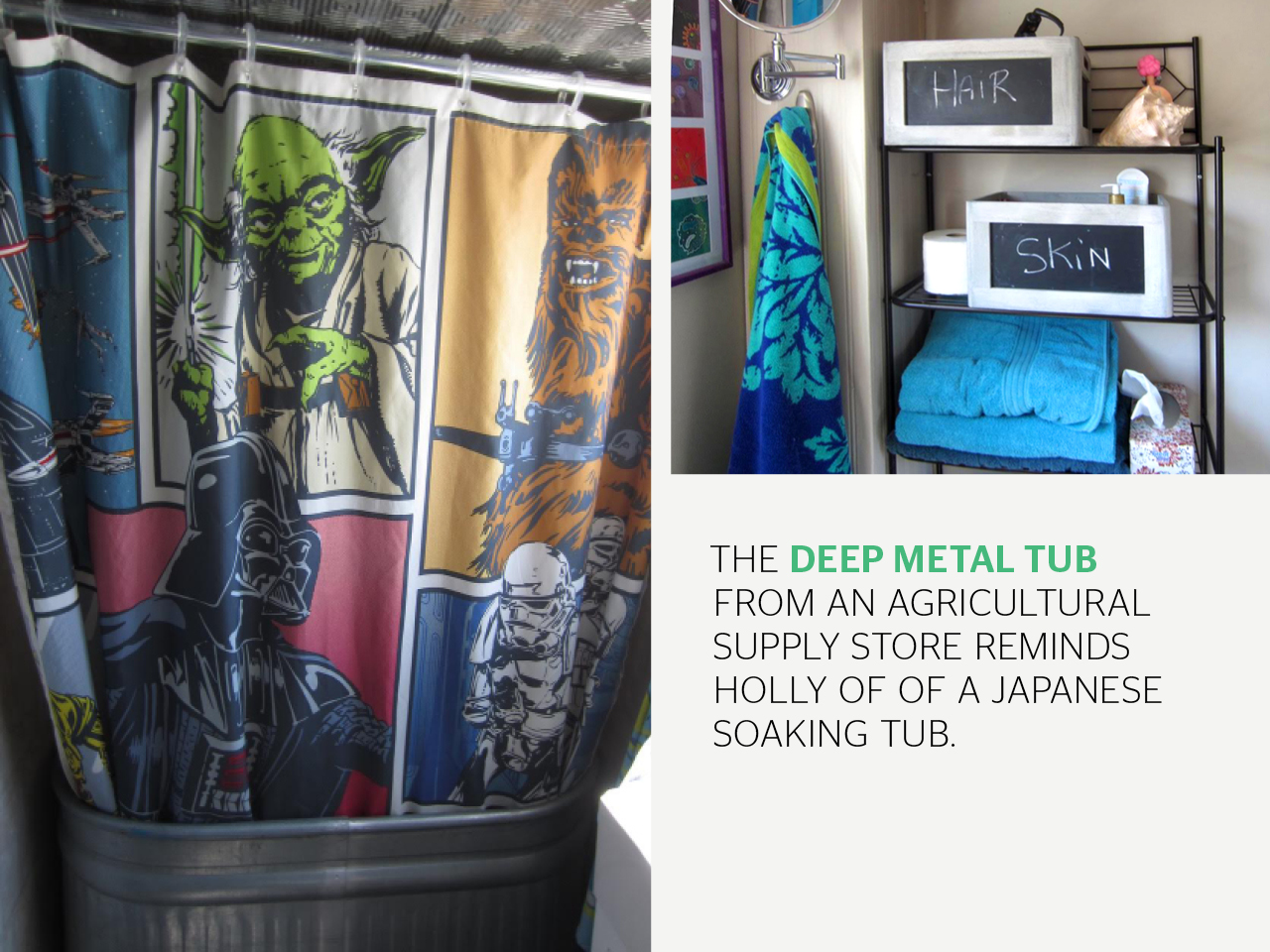 “I lost two homes when relationships ended, and this is my way of not rushing into things—there is no room for another adult here!” says Holly. “This is 100 percent my space with my kid.” When Emmett is a few years older, she plans on setting up tiny house #2, joined to the first with a greenhouse or breezeway so that they can both have privacy and their own bathrooms. Right now, though, tiny-house living is absolutely the right choice for them. “We have a happy life here,” she says simply. “We can focus on what’s important.”