These miniature scenes may just inspire your next interior design moment. 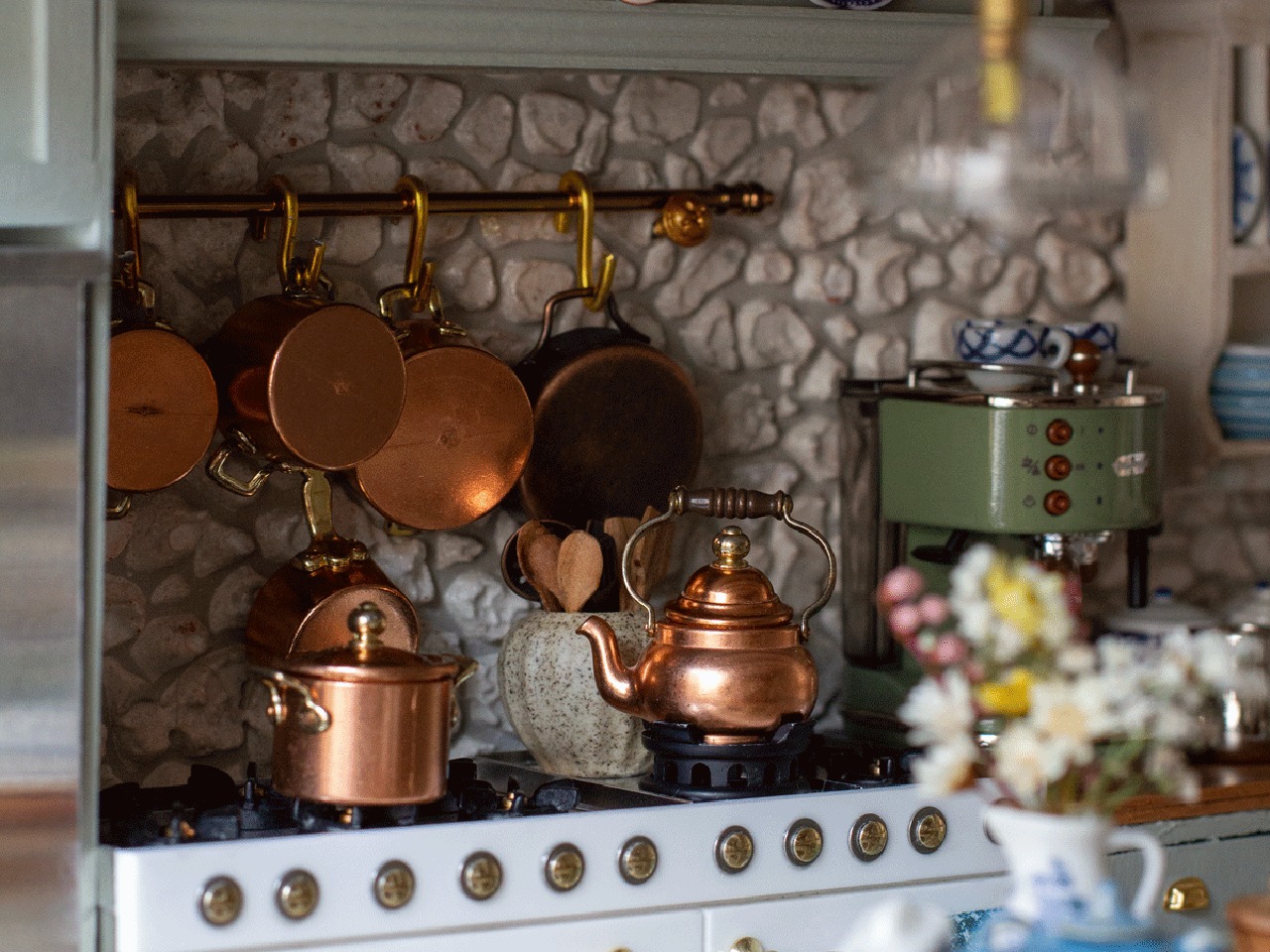 Although miniature decor art has been around for many years, modern-day miniature artists have been putting a fresh spin on the art form, creating scenes and structures that reflect current interior design aesthetics.

And they’re not only beautiful to look at—these serene art pieces are realistic enough to inspire actual homeowners looking for fresh design ideas. We got the scoop from four Canadian artists on why they chose this art form, how it evokes inspiration and a behind-the-scenes look at their artistic practice.

Wei Xu, the founder and designer behind Honey Thistle, initially began making miniature art as props for stop-motion animation projects. Xu explains that many of the pieces she was looking for didn’t come ready-made, so she had to make them herself. She started designing and building miniature furniture as a way to play out her own design ideas on a smaller scale—and a much smaller budget.

“It’s a way to explore trends or certain aesthetics without committing to something permanent in your own home,” says Xu. “If you try [something] out at your home, you might find that it doesn’t really fit with the rest of your house … or maybe it’s impractical.”

Or, perhaps, as Xu notes, you’ve had your eye on a beautiful chair, but the price tag is $3000. “You can always make a miniature version of it instead,” she says.

And Xu does just that, using materials such as basswood, epoxy glues, wood stains and paints to create realistic spaces “where people can envision themselves relaxing in and unwinding, reading a book and enjoying the plants.”

She has also taken woodworking classes to improve her process of creating miniature wood pieces. Though woodworking for large furniture is not a direct translation for miniatures, it helps her remain as true as possible to real-life manufacturing processes.

These realistic techniques are exemplified in one of her favourite structures—an 8 ⅜ inch by 7 ⅝ inch by 4 inch boho-inspired room box featuring terracotta tiling that she laid down and grouted, and a brass metal wall hanging. 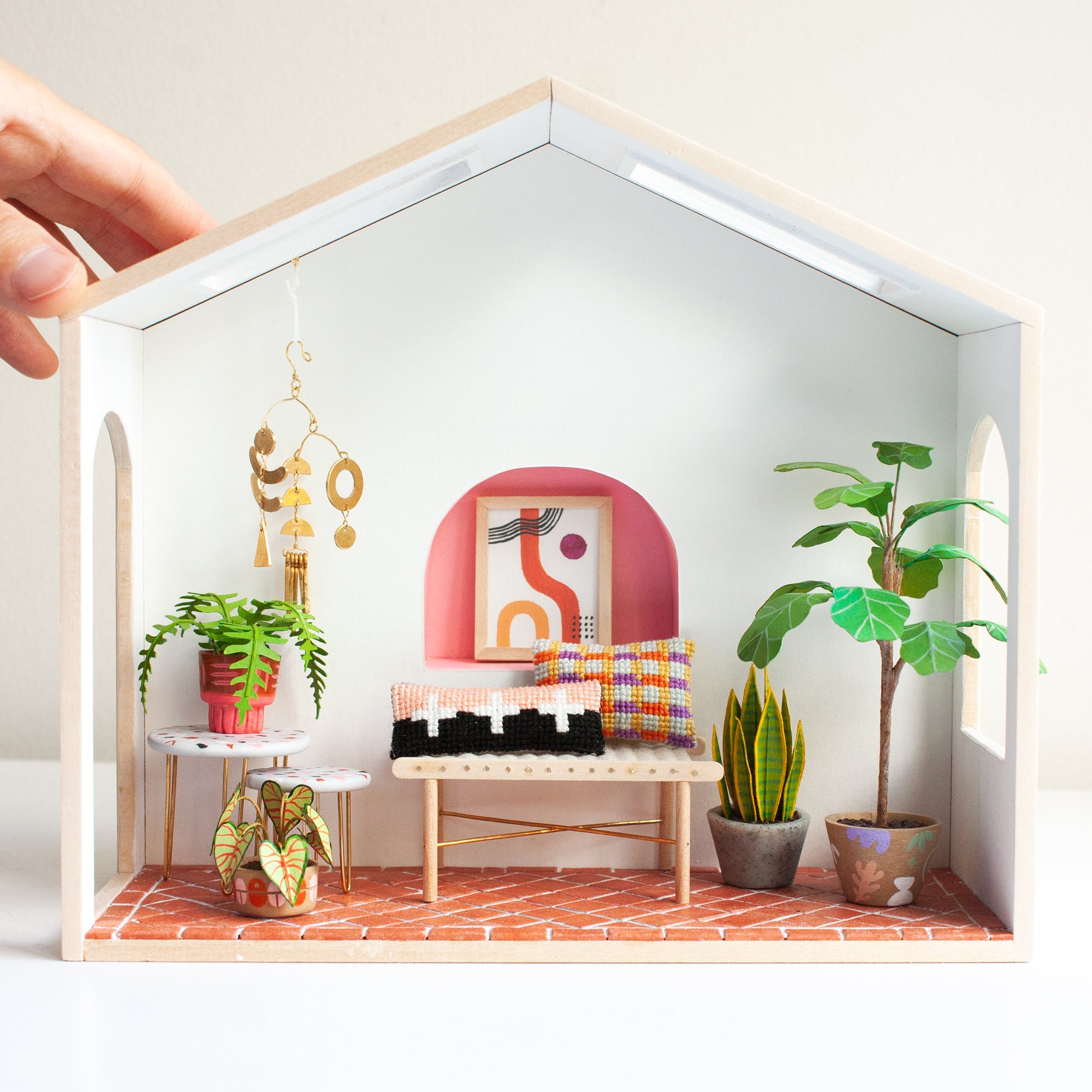 “It’s fairly simple in concept, but I think it captures my love of colour and shapes pretty well,” says Xu.

Briar Nielsen, the creator of revive minis, was fascinated with dollhouses as a child. While she always had a love for interior design and creating miniatures, Nielsen largely dropped her dollhouse crafting until about three years ago, when her mom went into palliative care and she needed a distraction to keep her busy.

“I just love crafting and working with my hands and decorating and designing spaces,” says Nielsen. “So dollhouses were kind of the perfect thing to get back into. And then I just became super obsessed again.”

Soon after, Nielsen would create revive minis—an Etsy shop and Instagram page showcasing and selling her monochrome, minimalist-style miniature art. Nielsen adopted this clean aesthetic after she moved into her first apartment in Toronto.

“It was my first space that had all white walls and I just loved it so much,” she says. “I started to come into my own personal style in my living situation. That just translated into the dollhouses.” 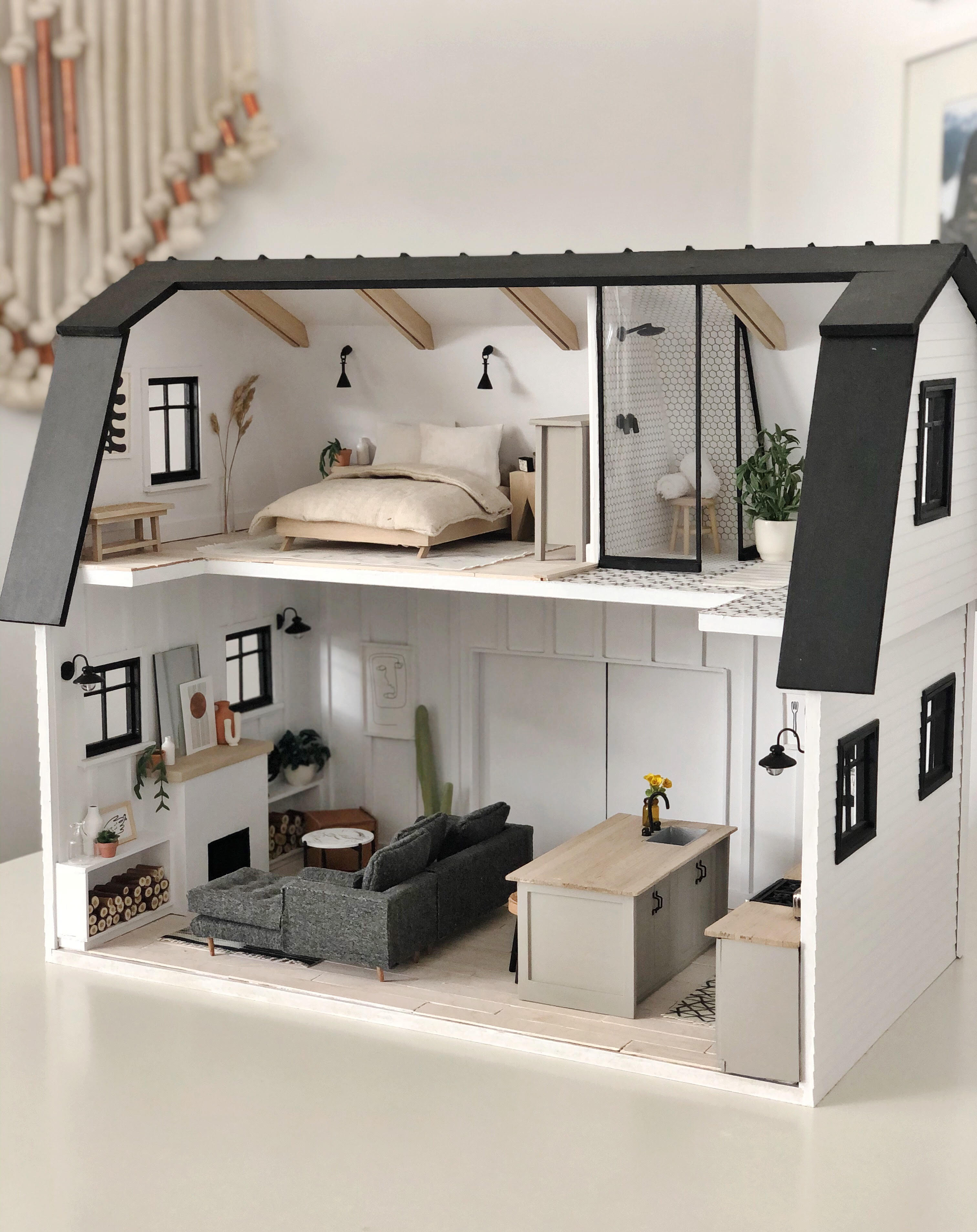 “I really felt like when I was working on that project, my skills really developed,” she says. “I kind of feel like I impressed myself.”

Jillian Strahl, the creator of Dollhouse Dwelling, began her work as a miniature artist a year ago when she decided to renovate a dollhouse for her daughter’s Christmas present. Gaining inspiration from Pinterest, she started working on a very simple, chic dollhouse.

“I kind of got going and I realized how therapeutic it was and how enjoyable it was for me,” says Strahl. “I would spend a lot of the evenings working on this project and then I finished it, and I was genuinely sad about it.” Strahl wanted to figure out how to keep this passion going. Her friends encouraged her to pursue more miniature projects, which eventually led her to create a small business making designed dollhouses.

Her style is distinct in its simple, neutral tones, pops of foliage and furniture choices common to bohemian, minimalist design. She often sources her materials from Facebook Marketplace or thrift stores.

“I’m always on the hunt for … vintage wicker items, things that I know people like in their own homes,” she says. “I know vintage wicker and rattan pieces are very common these days. And I love those too.”

She says her favourite project was the third dollhouse she ever created: a three-level, white wood home featuring a bedroom, kitchen, bathroom and nursery. The piece measures 25 inches by 44 inches by 12 inches and is in 1:6 scale. Inside, there is lace carpeting made from a doily, along with a spiral staircase and a white vintage wood stove. 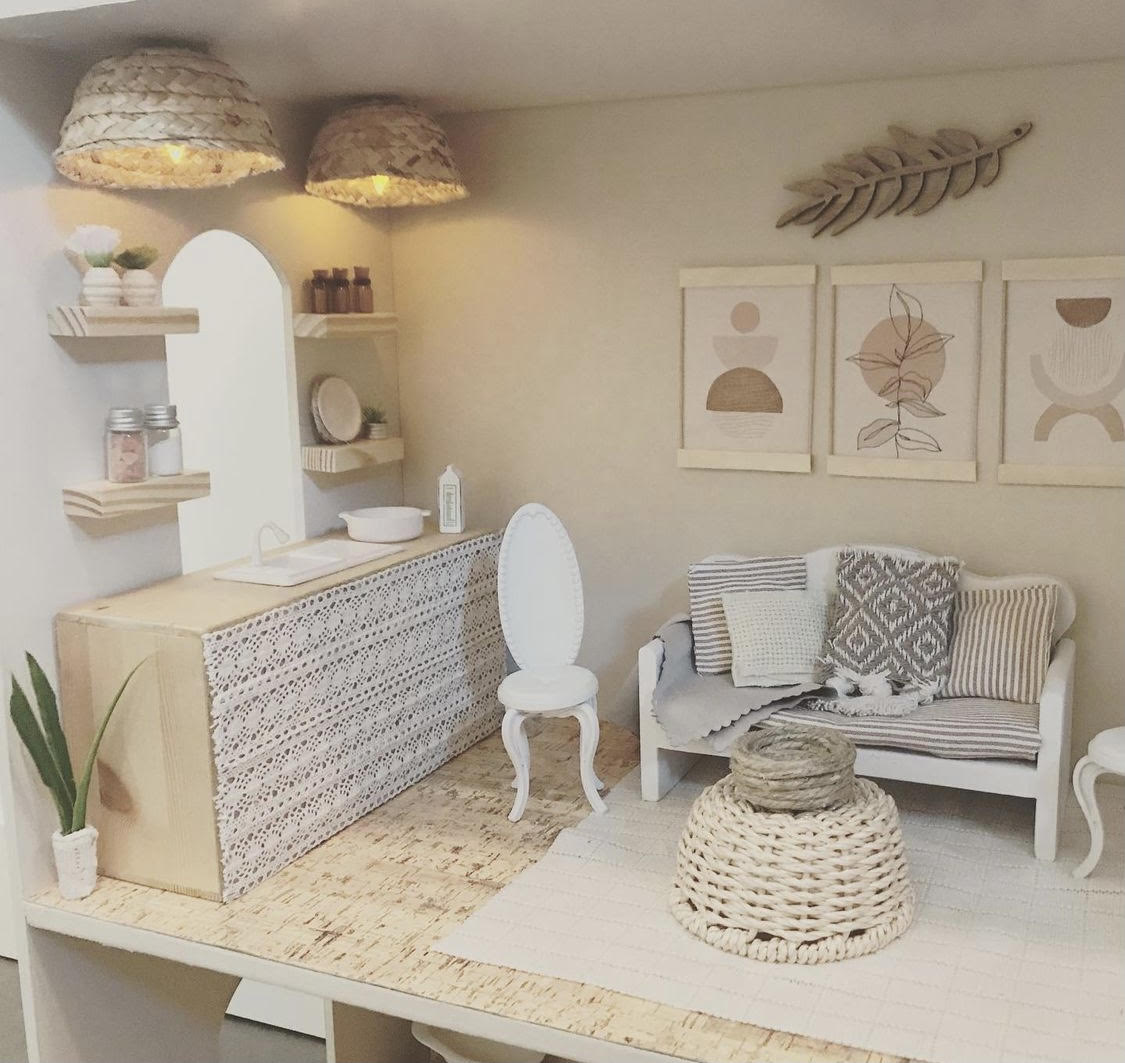 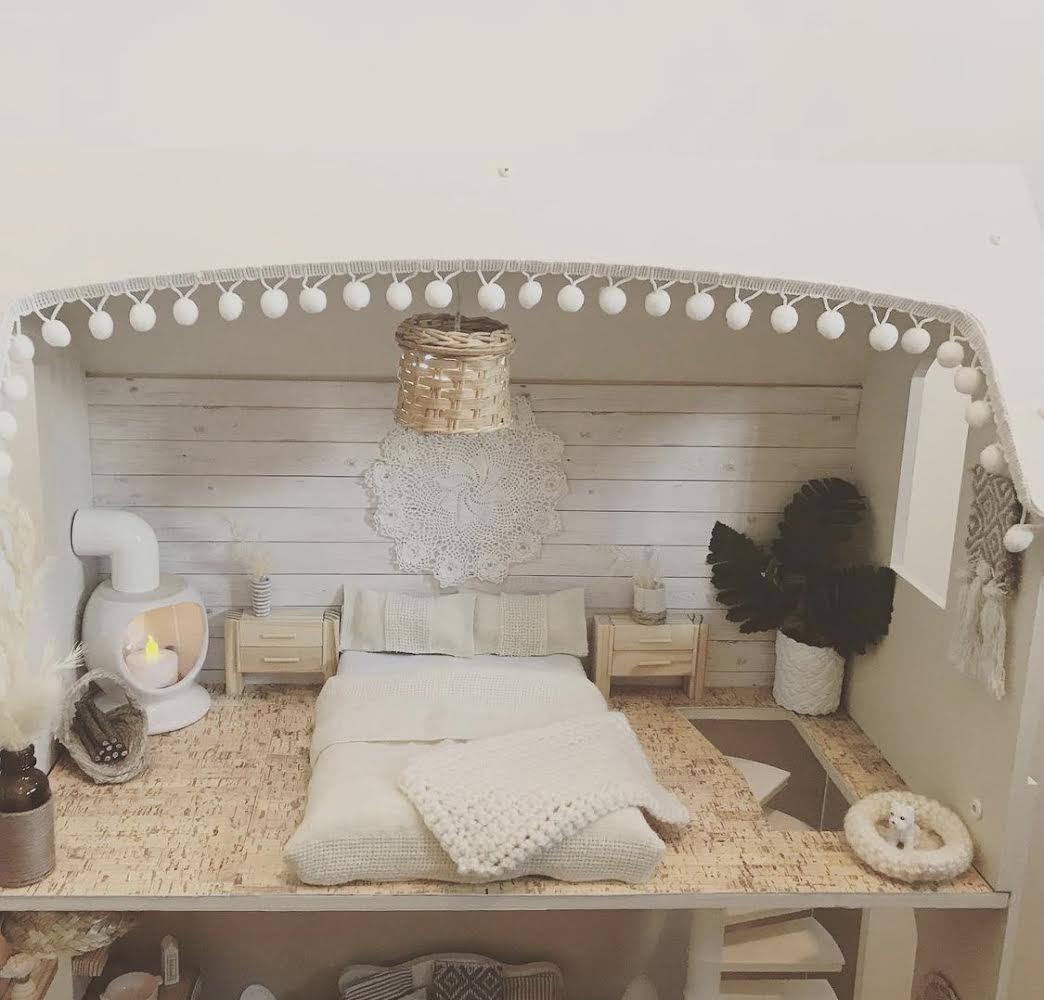 When Strahl creates a dollhouse, she works entirely from her own design and sells it as one art piece. Large dollhouses start at $400 and small ones at $225, with the total cost determined by time, labour, supplies and materials. She has recently created a waitlist for customers interested in purchasing a dollhouse when it becomes available.

“I find the inspiration [for a project] on my own,” says Strahl. “Just because I feel like that’s where I get my joy.”

Jacqueline Greenwood, the creator of Wildwood Miniatures, started renovating dollhouses in January 2020 as a creative project to do with her grandchildren. She took to Facebook to look for vintage dollhouses to buy, and narrowed her search to three options, carefully deciding which would make her ideas for the perfect interactive dollhouse come to life.

“It’s almost like looking at a real property in the sense that you have a budget, and you have this wish list, and you see its potential,” says Greenwood.

Settling on one of the houses, Greenwood made her purchase and began looking through Instagram and Pinterest for more inspiration. Though she intended to make her dollhouse kid-friendly, she fell in love with the concept of dollhouses as art pieces rather than toys.

“There’s sort of this elusive quality about something really tiny that just grabs you. It’s really quite magical,” says Greenwood.

She quickly realized there was something exciting about making art pieces for herself, and her hobby took off from there. Her Instagram page, wildwood_miniatures, was born to share her process of renovating dollhouses into her signature farmhouse style, which is “really just an extension of my own personal, real life aesthetic,” she says.

She has since created a miniature farmhouse shop with a floral studio, a three-level home known as Wildwood House and several scenes and details that would give any rustic home a run for its money—all done in 1:12 scale.

Lately, Greenwood has been experimenting with the possibility of adding a miniature bakery into her farmhouse shop and floral studio as she has become interested in creating polymer clay foods. She’s made everything from multi-tier cakes to charcuterie boards as well as pumpkins, gourds and breads to inspire the ideal fall scenery. Though Greenwood has purchased polymer clay food from artists in the past, she says this can become a very expensive venture, so making the pieces herself was the perfect way to keep her interest going.

“At Easter, I tried making a [polymer] cake for the first time and it went pretty well,” says Greenwood. “That led to another and then another, and I just found that I really love that. That’s an area that I really, really want to develop my skill in.”

These clay pieces are often featured in her dollhouse kitchens, such as one of her favourite projects she’s done, the kitchen in her first dollhouse, in which she fashioned a stone wall to give the miniature space more character.

“I wanted to create this feeling of an old English country house, so I opened it up and took out a wall that was existing and created a stone wall,” says Greenwood. “I love that in the kitchen. People seem to love it as well.”