How to make homemade weed-killer and more gardening tips 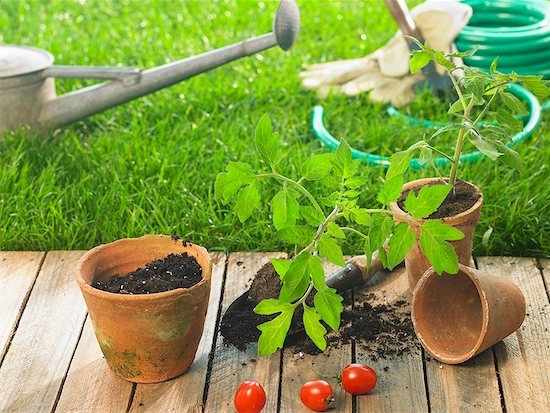 Bring on the sunshine, weeds and worms. Our May gardening guide should have you well on your way to a lush summer garden – and earn you a few points with a Mother’s Day gift that keeps on giving. Of course, since Canada is so diverse in terms of weather be sure to do some follow-up research in case you find yourself in the midst of a heat wave/cold snap. For more information on the predicted forecast in your area check out the Canadian long range forecast from the Old Farmer’s Almanac (scroll down for Canada map).

Week one: Make your own weed-killer
Here is a recipe for homemade weed-killer that works amazing so consider yourself warned – this stuff will kill pretty much anything.

The results
It works on stubborn dandelions and pretty much anything else you want gone, so make sure it lands where you want it. You likely only need a few drops in the centre of the plant, but depending on its size, you may need to add more.

Week two: An herb garden for Mother’s Day
My brother and I tend to give Mom what my fiancé likes to call “make-work projects.” Of course, no mother needs more work, so this year earn a few brownie-points and get her a gift that keeps on giving – an herb garden.

Herb gardens can be done in planters (inside or out) or in your backyard garden. The great thing about them is they can be compact so they won’t take up a lot of space.

It’s a little late in the season to start herbs from seeds (depending on the variety), but most nurseries (or even grocery stores) sell potted herbs that are ready to go and some are even ready to eat. Just remember when choosing your herbs (besides grabbing some of Mom’s favourites), it’s important to look at what growing conditions each herb likes and pick ones that complement each other. Also, make sure to choose plants with good root growth and well-developed leaves.

Here are some great tips on how to grow herbs indoors.

Week three: Composting
The May long weekend is the perfect time to start composting. Composting is an environmentally-friendly (and cheap) way to build back-up nutrients in your soil while reducing your own household waste.

Susan Antler, executive director of The Compost Council of Canada, says that composting is not a complicated process. “The nice thing is Mother Nature has been doing this since time began,” she says.

Antler suggests these steps to get you started:
1. Get a bin to hold your compost. Antler encourages you to consult your municipality about what they have to offer because they usually have discounted prices.

2. Find the right location. Your bin cannot be placed on concrete (it has to be on soil) and it should be somewhere that is convenient to access. A sunny location will also help speed up the process.

3. The first layer on the bottom of your bin should be twigs. “So there’s a bunch of air pockets at the bottom,” Antler says.

Tip: In the fall, bag up your leaves beside your bin and then you will have a supply of brown to cover your green layers throughout the winter.

If you already have a bin:
1. Turn your bin. “It comes down to how fast you want compost to happen,” says Antler.

2. Collect the compost. Not a lot of break down will happen during the winter months but when the ground starts to thaw there will be more decomposition so now is a perfect time to start collecting the soil at the bottom to add to your garden.

Week four: Tomatoes
Now is the time to plant those tomatoes but only (and I can’t stress this enough) if there is no danger of frost.

1. Check the forecast!
A late frost may damage your plants beyond repair or even kill them and an extended cold spell could damage your fruit set. If you would like more information on how temperatures effect tomatoes, the Ontario Ministry of Agriculture, Food and Rural Affairs has some easy to read charts on just that.

2. Preparing the ground
Mike Whittamore of Whittamore’s Farm (opening for the season on May 4) in Markham, Ont., says that tomatoes like to be planted in soil that has been well worked with a little bit of organic material. He says that some people like to take a soil temperature before planting, aiming for a range of about 18 to 21 degrees Celsius.

Tip: Too much nitrogen in the soil will give you fuller leaves but not a lot of fruit.

3. Planting tips
Tomatoes like warm soil to help them develop their root system. Whittamore’s Farm plants their tomatoes under black plastic (poking holes for the plants to grow through) to keep the soil warm and control the weeds. They also lay down a drip irrigation system to get water under the plastic. But Whittamore says that tomatoes don’t need a lot of water (weather permitting) and some people think they have a better flavour when they are conservatively watered. On the farm they also stake the growing plants to keep the ripening fruit off the ground – this also helps to prevent rotting.

Tip: If your plants’ leaves start to turn purple that means the soil is too cold and they aren’t able to take up phosphorus.

4. General care
A number of aliments can affect your tomatoes. The two most common are funguses are early blight and late blight that usually occur more prominently when there has been a wet spring. Both can be combated by a number of organic fungicides (see the link below for pictures of what these funguses look like). Whittamore says that tomatoes can also become infested with hornworms and the easiest way to deal with them is to just pick them off.

Here are some more tomato growing tips as well as a list with pictures of some of the most common tomato aliments.

FILED UNDER: 20 ways to spiff up your backyard Gardening May tomatoes