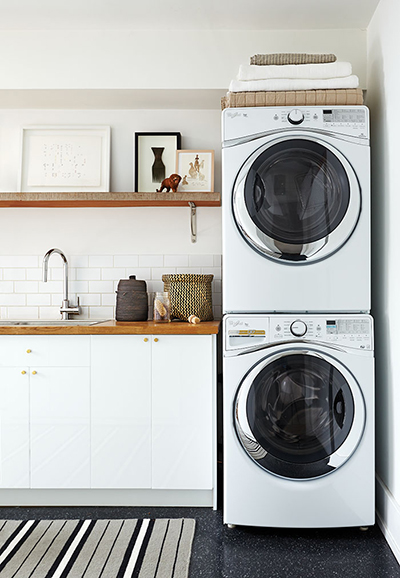 “We were bursting at the seams,” says homeowner Murray Whyte, recalling family life before the reno. When the Toronto-based journalist and his wife, photographer Sian Richards, moved into their west-end home seven years ago, it was just the two of them. Before their children, now four and six, were born, the couple liked having a main-floor apartment in the three-storey property that they could rent out while they lived on the upper floors.

But as their family grew, so did their need for space. Last spring they decided to renovate the main floor and convert the house back into a single-family dwelling. That left them with the dilemma of what to do with the old second-floor kitchen: To turn it back into a bedroom would mean costly retrofits like removing plumbing, venting and a gas line, and with five bedrooms already, there was really no need.

“Then we realized it had all the bones of a great laundry room,” Murray says. “Everything we needed was already there: plumbing from the dishwasher, gas and a vent for the dryer from the old stove. Plus, it was big enough to accommodate all kinds of clothing and linen storage.” 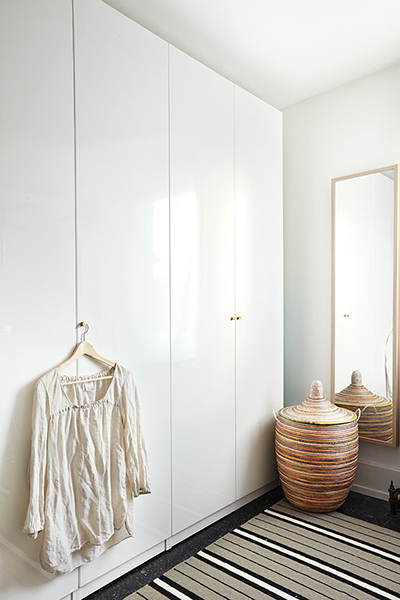 Design tip: Use white to expand space. “This is a relatively small area,” says Murray, “so we decided to keep the look as light and airy as possible with white cabinetry.”

Next they needed to outfit the space with storage units. “We had a pair of tall pantries that had performed really well over the years and were still in great shape,” he says. “It seemed like an awful waste to just get rid of them, so we started using them as giant dressers for all our folded stuff.” For hanging space and linen storage, Ikea’s Pax system fit the bill. “It was amazingly adaptable and matched the finishes of the old kitchen perfectly,” Murray says. “It became this kind of fantasy project — clean and dirty laundry, never leaving this one room.” 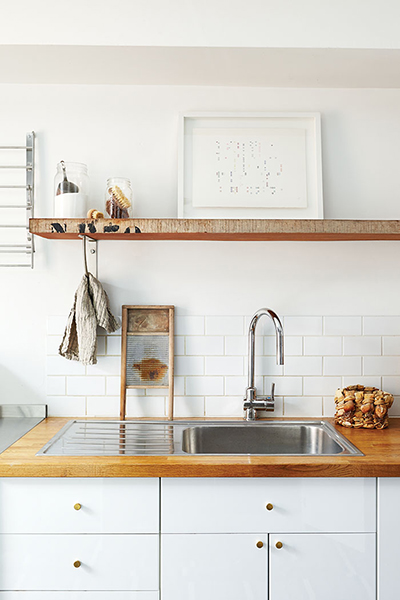 Design tip: Use glass jars for detergent and brushes. Keep laundry soap and often-used scrub brushes in pretty jars. A small copper saucepan is put to good use as a scoop. Wall-mounted drying racks adjust to three different positions and fold away when not in use.

The couple chose the Whirlpool machines because of their smart technology. The washer automatically releases the right amount of detergent for each load and adjusts the water temperature so clothes are treated gently, while the dryer uses sensors to turn itself off when everything is perfectly dry, saving energy — and clothing. “Laundry for dummies,” he jokes. 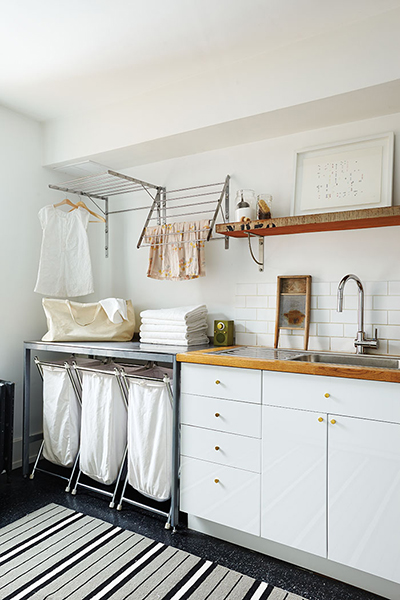 Design tip: Add an area rug for warmth underfoot. A flat-woven kilim rug makes this practical space look and feel more like a principal room. It also provides an inviting layer of softness. “The rug isn’t totally necessary,” says Murray, “but this is also where we get dressed for work or to go out in the evening, so we wanted it to be comfortable.”

“It’s a crazy luxury to not have all of our clothes stuffed in closets and drawers in our bedroom, which is now just a perfectly peaceful, mess-free space.” 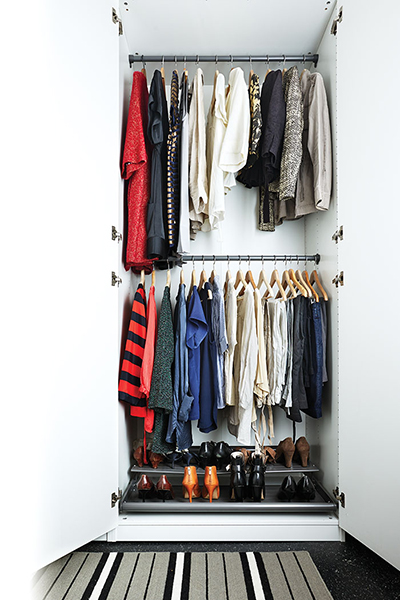 Design tip: Include dedicated shoe storage. “During this makeover, we learned that we have too many shoes,” says Murray. “The Pax cabinets offer proper shoe-storage shelves, which can be pulled out, so shoes are organized and out of sight, rather than in the usual jumble by the front door.”