How One Family Ditched Their Tiny City Semi For A Sprawling, 200-Year-Old Place In The Country

Making the move: what life is like for a family who moved to a small town in Ontario and nabbed the stone house they’d been eyeing for a decade. 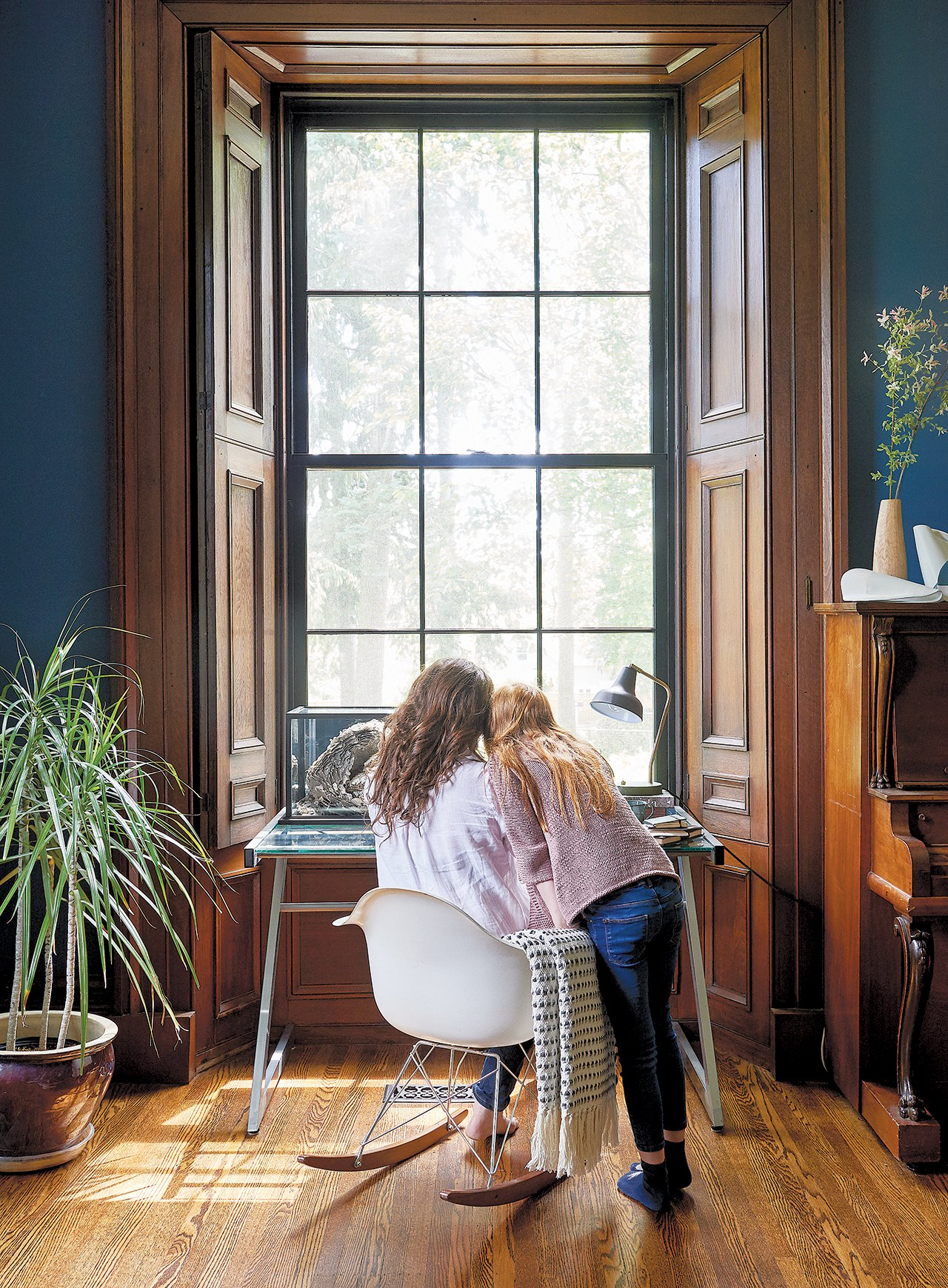 Sara Wood and her daughter sit at the desk in their 200-year-old Dundas, Ont. home. “It’s that screen-door-slammming lifestyle where she just runs out and I’m like, ‘Be back fro dinner!'” says Wood of the freedom of country living. (Photo, Sian Rirchards)

A few summers ago, Sara wood and her husband, Dan, woke up in their Toronto home — a downtown semi with a backyard the size of a postage stamp — and wondered how exactly they got there. “We were like, ‘Wait a second, when did we decide that this was where we were going to be?’ ” says Sara, who is a freelance stylist and former owner of an art café in Toronto; Dan is a film editor. Like plenty of city dwellers, they craved a change: more green space, a slower pace and a freer childhood for their nine-year-old daughter. Unlike most of those city dwellers, though, the couple actually took the leap and left Toronto for the small-town charms of Dundas, Ont., an hour outside of the city. 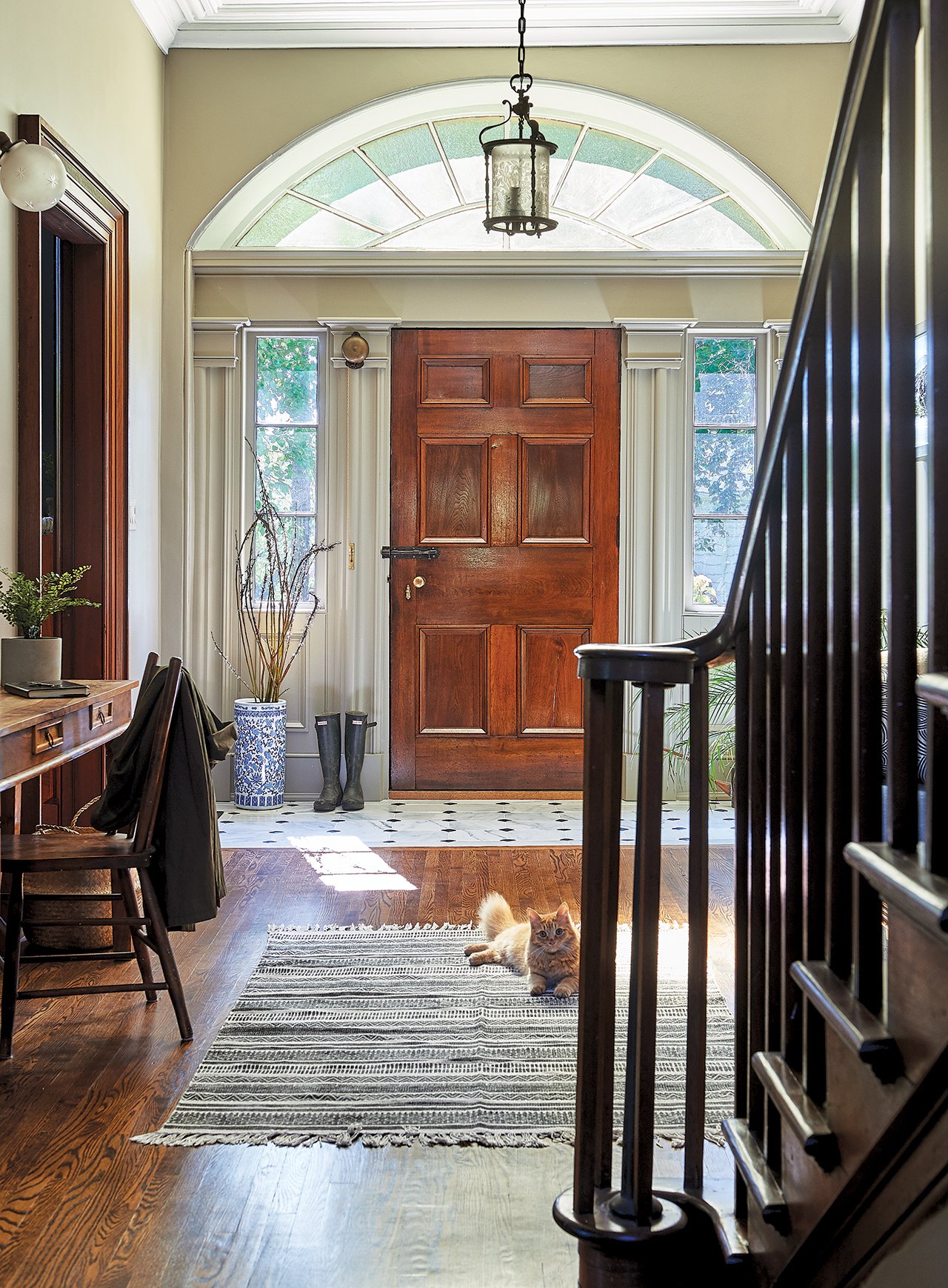 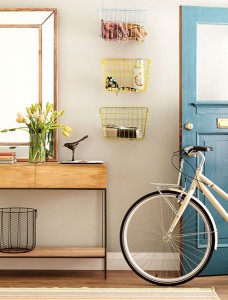 Sign up for Chatelaine's newsletters for our latest home stories

But making the move didn’t happen as suddenly as the realization that they needed to. In fact, they first laid eyes on their current country abode — a breathtaking, nearly 200-year-old stone house — more than a decade ago on a weekend getaway. After noticing the house nestled in a thicket of trees, the pair pulled over to the side of the road and sat in their car, mesmerized and craning their heads; they’d never seen anything like it. The house, which sits regally on a corner lot, is entirely clad in two-and-a-half-foot-thick stone walls and adorned with massive windows fit for its 15-foot-high ceilings. They drove on, but then, in 2011, Sara was casually browsing through MLS one evening and stumbled across a familiar listing. “I was like, ‘Dan! Dan! Dan! It’s that house!’ ” she says. The inside was everything they’d imagined it would be, but the house was far out of their price range. 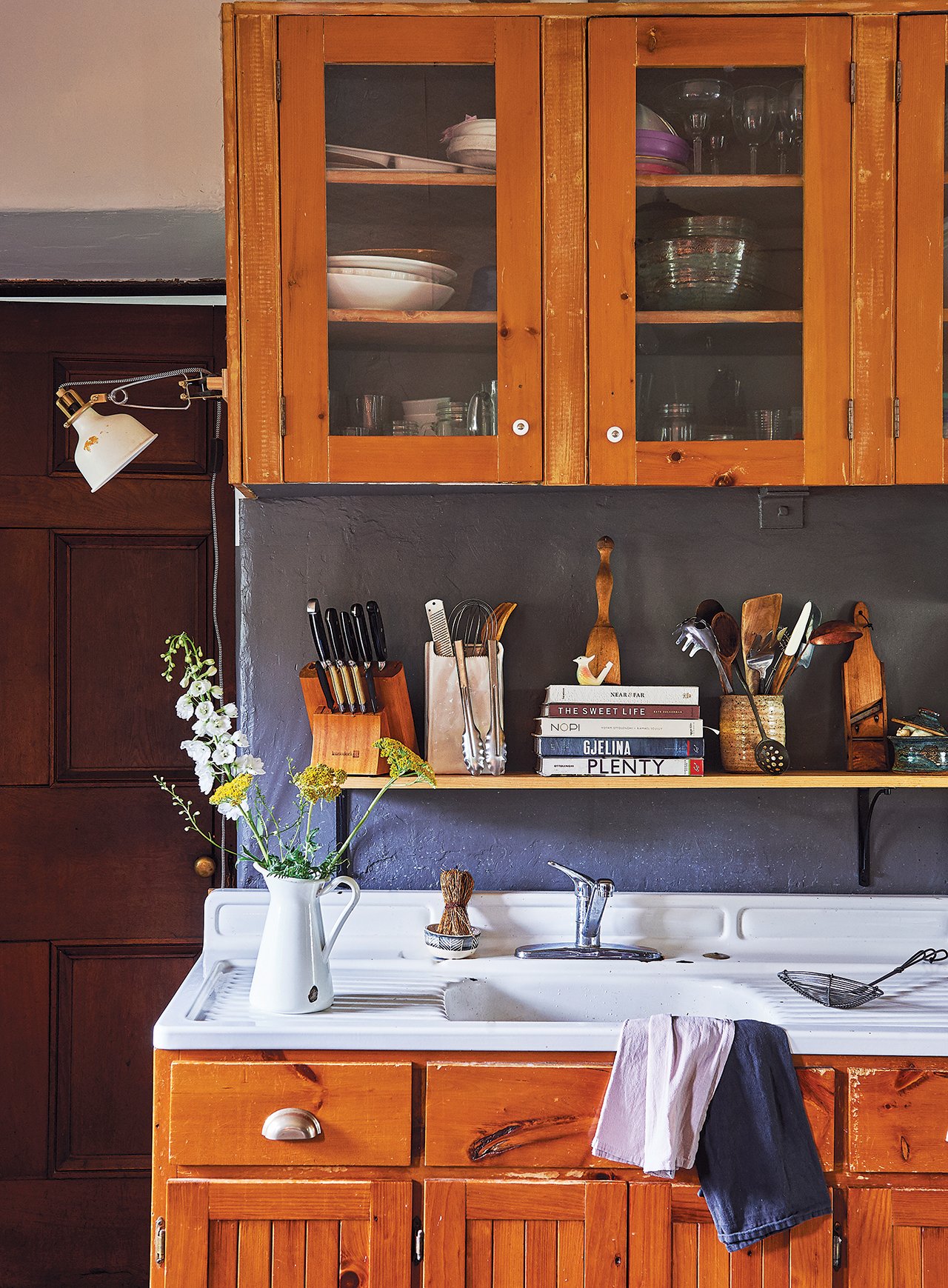 The house required a lot of love and elbow grease, including fresh paint in neutrals and dark blues. (Photo, Sian Richards)

When the couple officially began their search for a country home in 2013, the stone house hovered in the back of their minds. After viewing nearly 40 properties within commuting range of Toronto, they went for an in-person look at the stone house, which was still on the market. “I remember thinking, ‘This is my house. I can’t imagine being anywhere else,’ ” she says. They put in an offer; it was refused. Six months later, they tried again, approaching the owner privately. “It’s real estate: We had to be patient and determined,” she says. That determination paid off, and in 2015, the house was theirs. 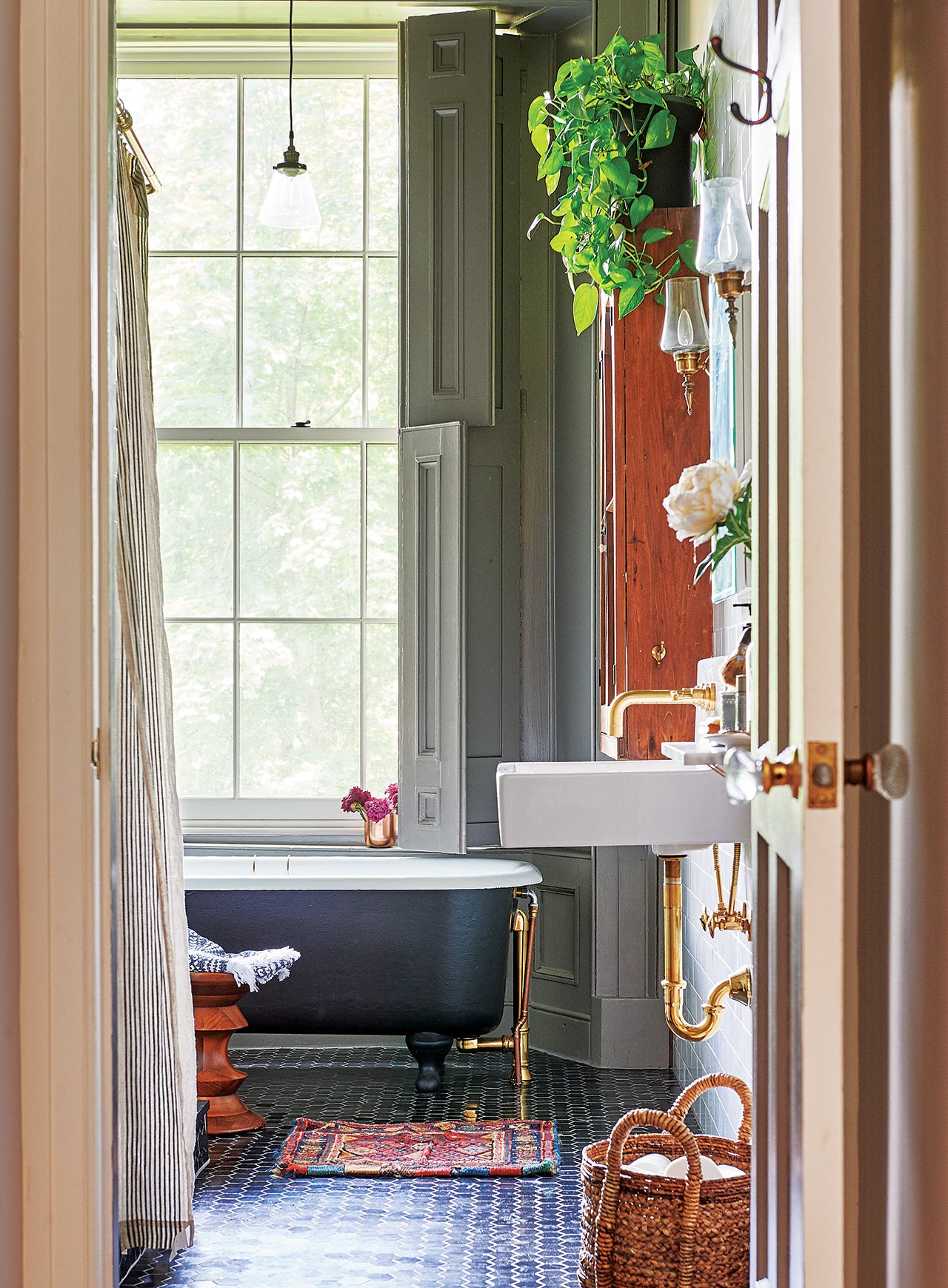 The bathroom is the only room that needed a complete gutting and do-over. (Photo, Sian Richards)

Out of respect for the house’s 200-year history, they haven’t done any major renovations — except to the bathroom, which needed a complete gutting. They have done a lot of mending, though, putting in new electricals, reviving the original heart-pine floors, replacing the windows (with wooden frames built to match the originals) and ripping down the floral wallpaper to make room for fresh paint in neutrals and dark blues. There’s space in the basement now for a pottery studio for Sara, and the sprawling yard engulfed in trees is the perfect spot for their daughter to play. 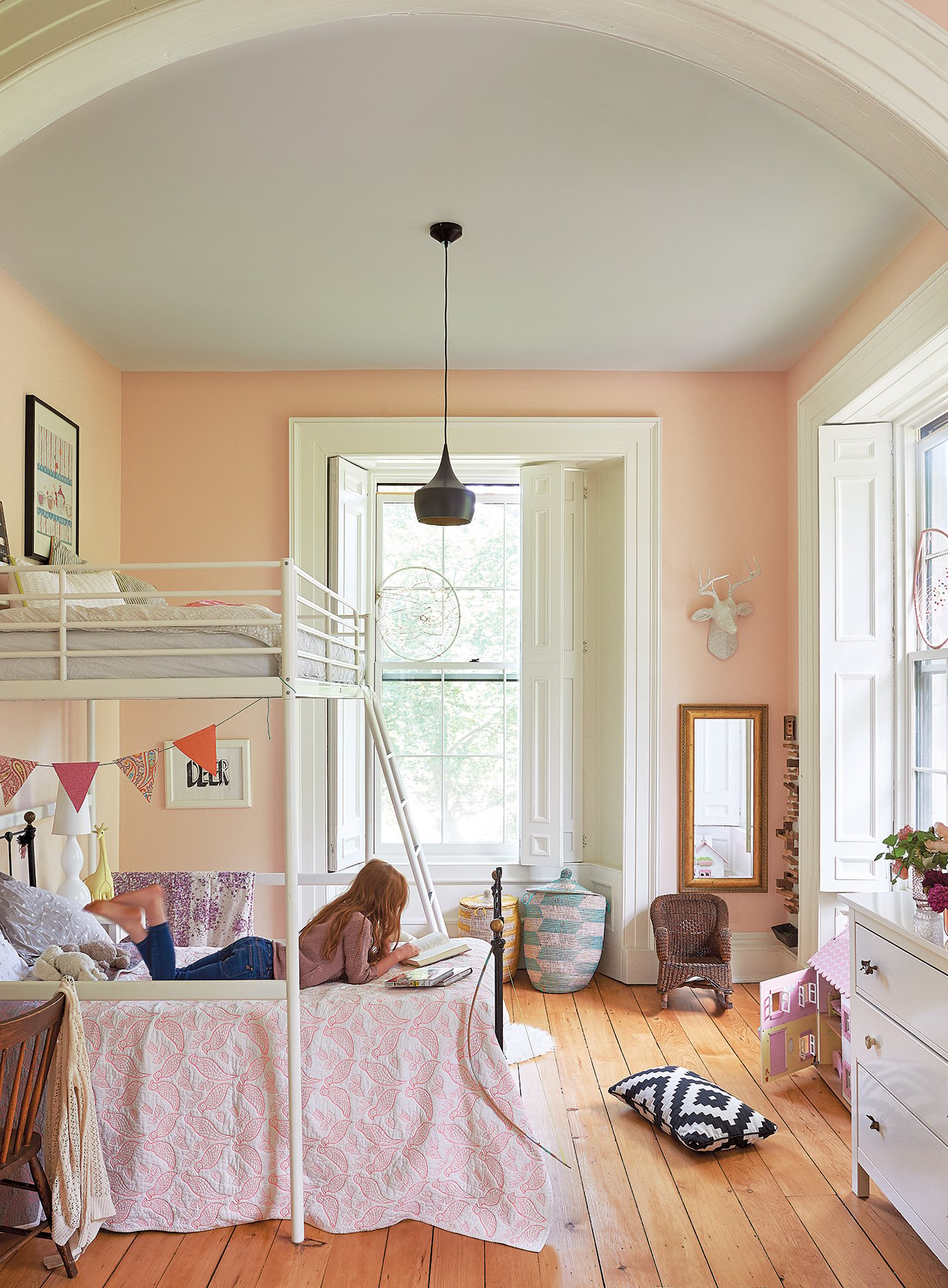 Wood is ecstatic that her daughter has space to learn and explore, inside and out. “Every time I set foot outside, I see the two Beatrix Potter–looking bunnies that live on our property.” (Photo, Sian Richards)

Dan commutes into the city for work on the train every workday, and Sara goes into the city too when her work requires it. She admits the coming and going can be tricky to coordinate, especially when their daughter is in school. But the life they’ve built in the country helps them keep sight of why they left the city in the first place. “I love waking up to the cardinals on the tree outside my giant window,” she says. “I love that every time I set foot outside, I see the two Beatrix Potter–looking bunnies that live on our property. I love that my daughter’s best friend lives across the road. It’s that screen-door-slamming lifestyle where she just runs out and I’m like, ‘Be back for dinner!’ I almost pinch myself — it’s just like I had hoped it would be.” 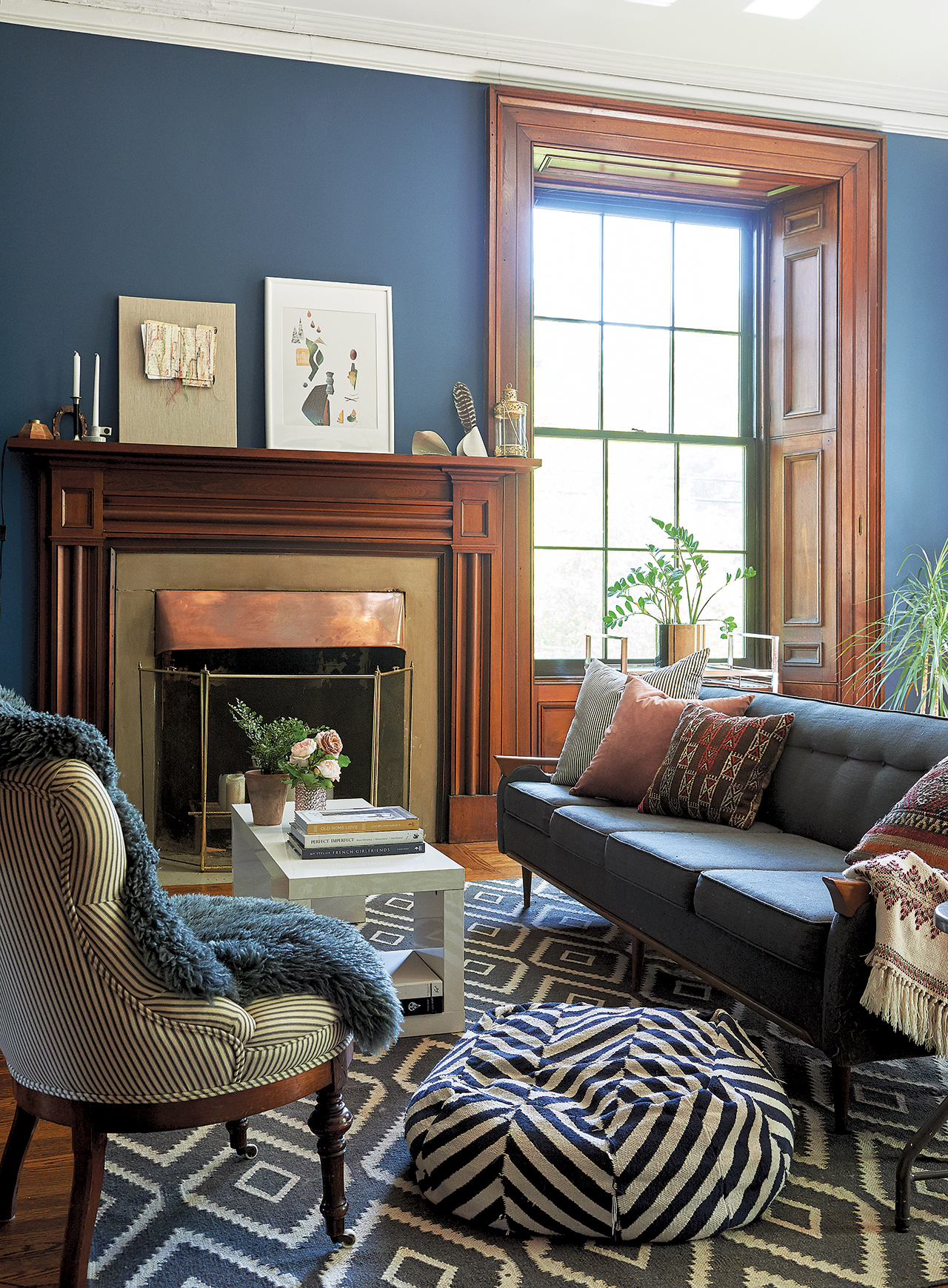 More:
20 Ways to Use Juicy Garden Tomatoes
Meet The Canadian Designers At The Forefront Of The Booming Modest Fashion Industry
The 7 Best Airbnb Treehouses In Canada That Will Inspire A Last-Minute Summer Vacation