To get her house in order—and stress levels under control—Sarah Nicole Landry called on a pro for a major organizational blitz. 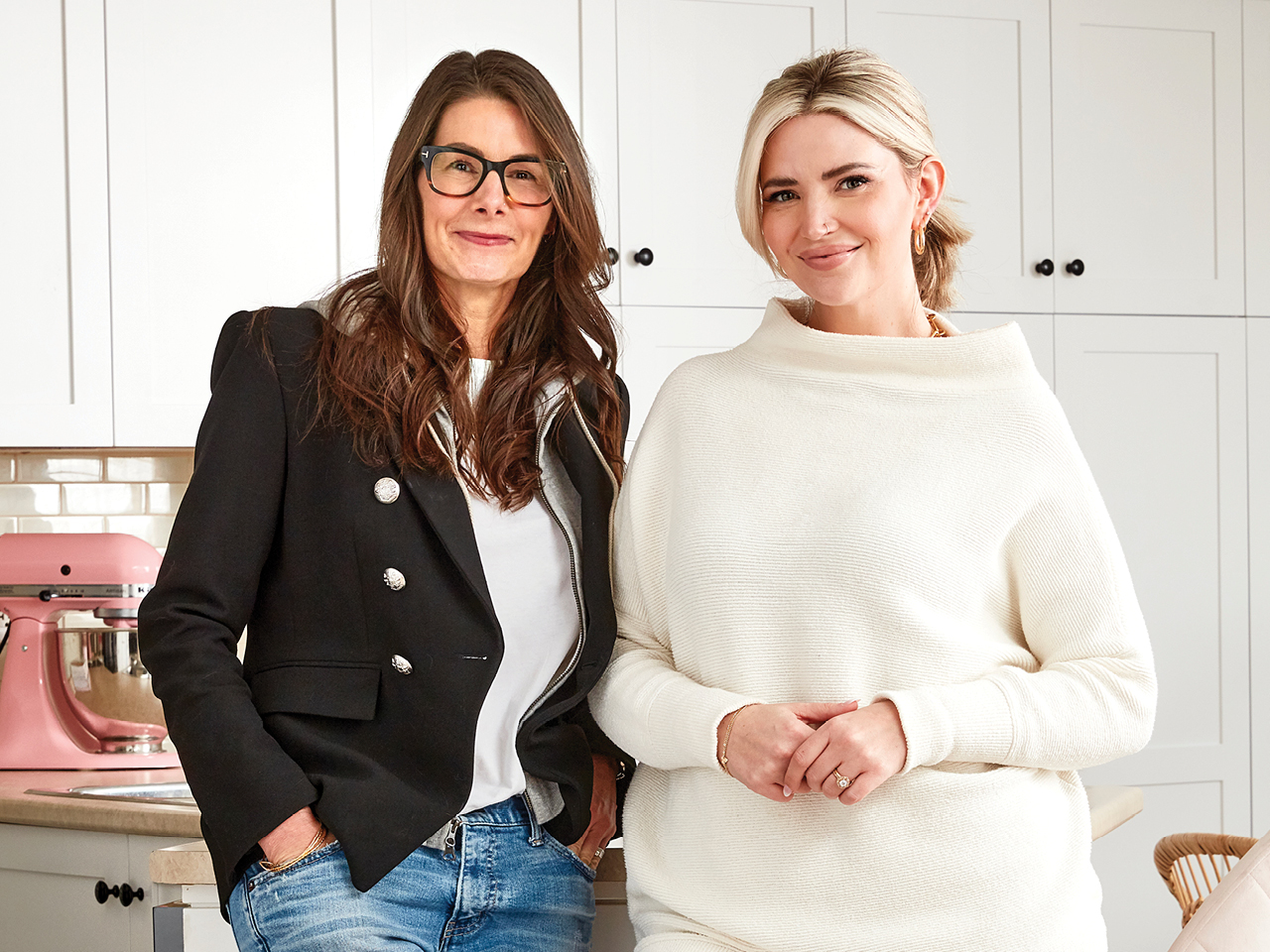 Between raising four kids (aged one to 16), recording a weekly podcast and creating content for social media, Sarah Nicole Landry of The Birds Papaya was struggling to keep her Guelph, Ont., home clutter-free. Her go-to strategy? Shoving things into closets and drawers. “I’m an out-of-sight, out-of-mind person, but it got out of control,” says Landry. “And it definitely was not out of my mind.”

Landry enlisted the help of Megan Golightly, the owner of Calgary-based personal organization company Simplified. Armed with serious decluttering skills and an equally helpful degree in psychology, Golightly has been organizing homes for more than a decade—including those of Jann Arden and Jillian Harris—and she’s passionate about helping people reduce their clutter-induced stress. Here’s how they tackled Landry’s four messiest areas, and how you can do the same. 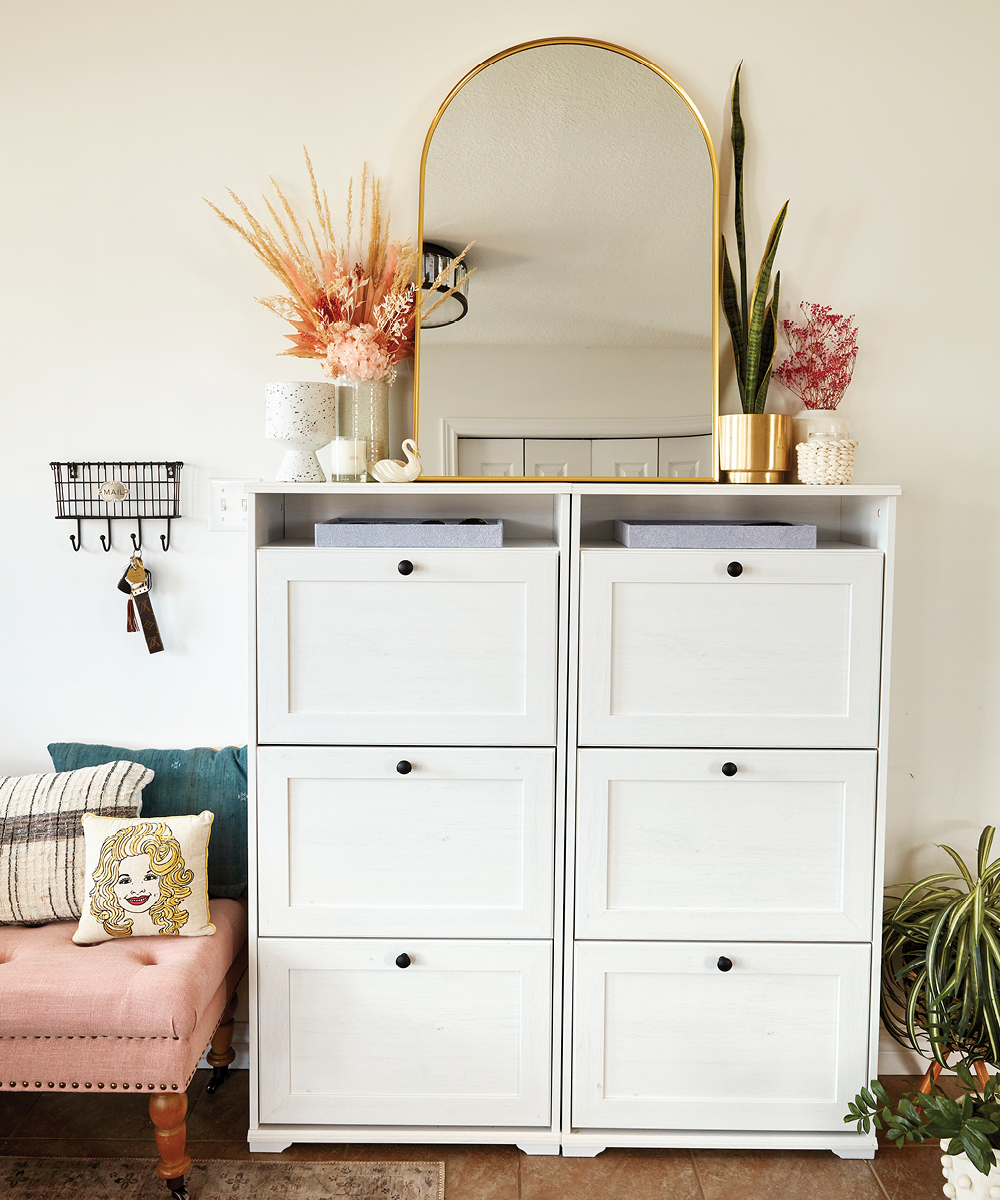 Because it’s used daily by the entire family, Landry’s entryway became a dumping ground. Golightly’s challenge was to turn it into a more functional space.

To make the most of the small front closet, they had to purge—something clients often find difficult, according to Golightly. “It was a bit of a learning curve recognizing that I really don’t need four denim jackets,” concedes Landry.

In addition to setting aside things to donate or throw away, Golightly and Landry had to find permanent homes for all of the various items the family was discarding willy-nilly as they walked through the door—and there wasn’t enough room to store everything in the entryway. So they had to get creative with finding new storage spots for lesser-used items, whether that’s in the garage (as with Landry’s rarely worn boots) or in the bedroom closet (which is where her collection of handbags now lives).

Pro tip: One of the most impactful changes in keeping the space organized was installing a bench with cubbies. Now, everyone in the family has their own labelled, catch-all bin to shed winter gear and accessories upon coming home. That’s a new habit Landry was excited to instill in her children. “I realized that I was teaching my kids to be disorganized,” she says. “Now we prompt them to put things in their bins.” 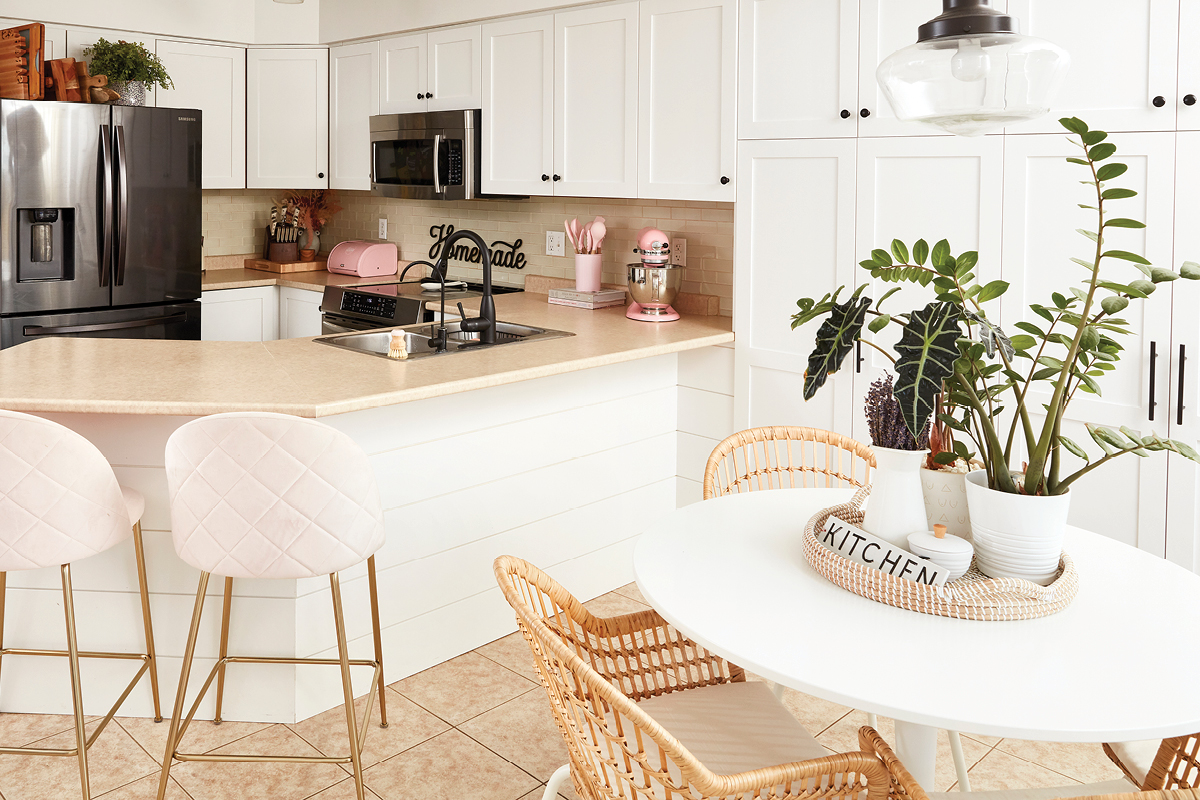 Shortly after getting married, Landry and her husband merged their households, resulting in a jumble of duplicate appliances, mugs, dishes and more.

First, Golightly’s team and Landry whittled out the dupes. Then, they hit the pantry, discarding what was expired and decanting dry goods into clear, labelled plastic containers. After getting a sense for how Landry’s family used the space, Golightly moved the food out of the pantry—which was so deep that items often got lost at the back—and into a nearby cabinet. The most-used baby items then went into the former pantry. For additional cupboard space, Golightly had melamine shelves cut at the hardware store and inserted them using plastic shelf supports. 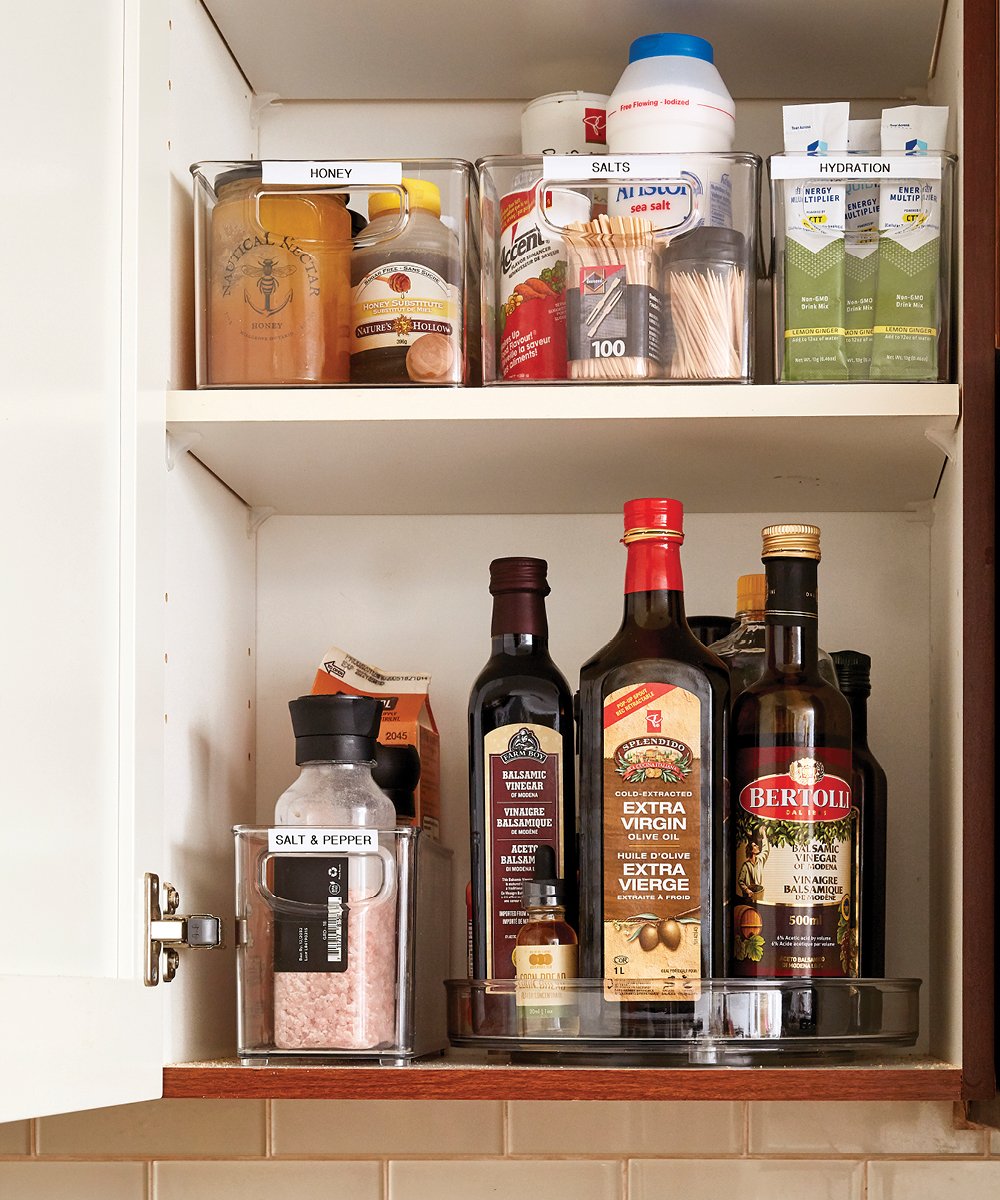 Pro tip: Making sure everything has a spot is the key to success. “We call dedicated spots ‘towns,’” explains Golightly. “You can’t get mad at your partner if they ask you where the pasta is and you say, ‘It’s in pasta town.’” This system has been a game-changer for Landry. “It’s impossible to just shove something away, because everything now has a place,” she says.

To create your own towns, take everything out of the cupboards and sort your stuff into categories, like condiments, canned goods and packaged snacks. Place each category in a clear plastic bin, and use a label maker (or custom labels from Etsy) to clearly mark what’s in each container and where they should go on the shelf. This way, you’ll always know where to put stuff back. 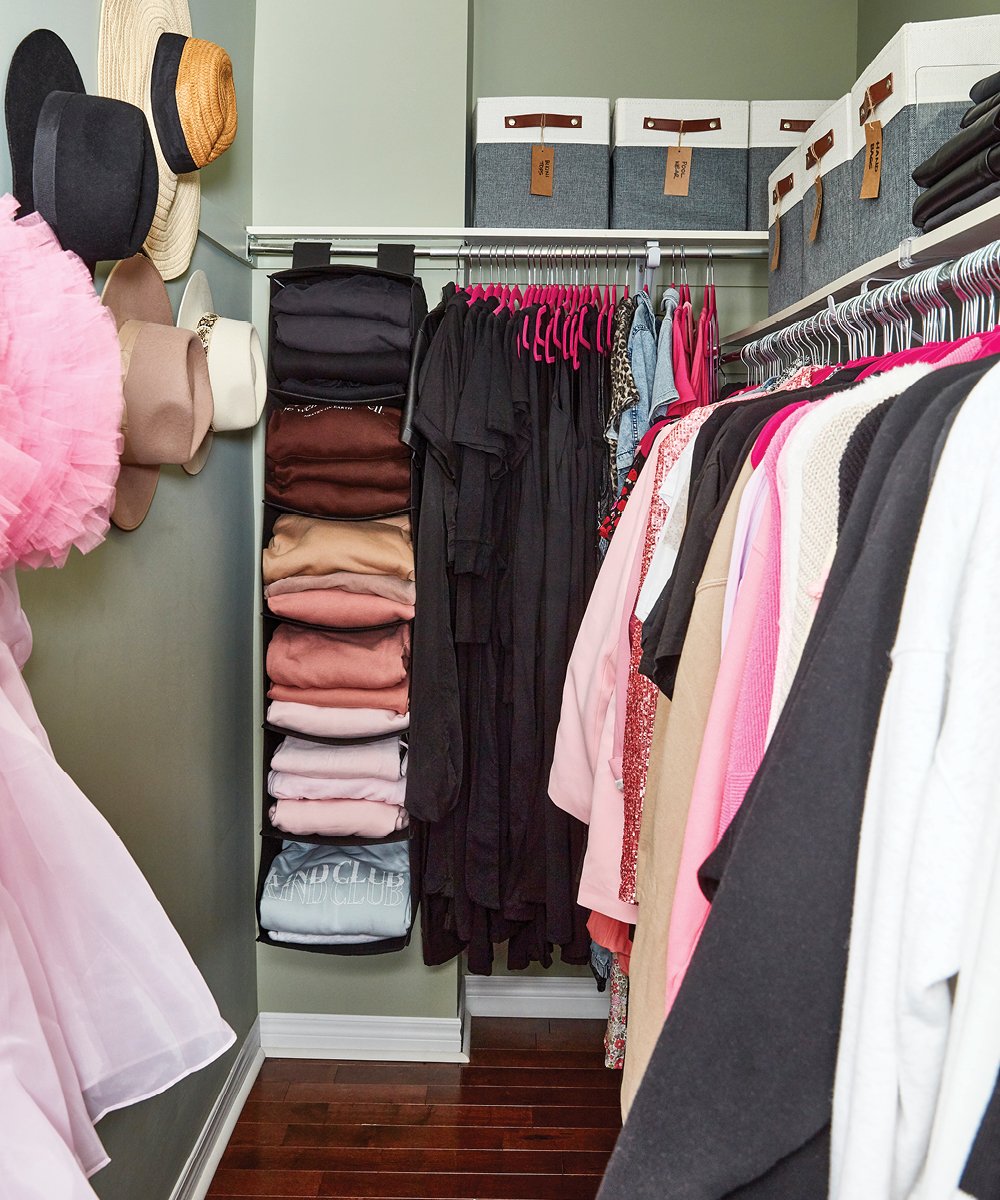 Landry’s overflowing closet was a huge source of stress—so much so that she was having trouble sleeping. “It was consistently on my mind,” she says.

They started by taking everything out. “You need to ask yourself if it’s worth the real estate,” says Golightly. “Do you need it? If so, where should it go?” They put off-season clothing and other items that Landry wanted to keep into labelled bins and storage containers. Establishing a donation pile was trickier. “If your body has changed, it’s hard to give up stuff,” says Landry, likening it to letting go of a part of yourself that no longer exists. “Be kind to yourself and donate—or store, if necessary—things that don’t fit,” suggests Golightly.

From there, it was all about space-saving measures: Golightly opted for thin felt hangers instead of thick wooden ones, stacked handbags in bins and used adhesive hooks to make the most of empty wall space to hang jewellery and hats. She also placed organizers in drawers to keep underwear and socks in their proper places and dividers on the top shelf to create neat stacks of jeans. The result is more than just a tidy closet. “When my husband and I went to bed that night,” says Landry, “it felt like a humming in the back of my mind had stopped.”

Pro tip: If decluttering your closet seems daunting, tackle an area with fewer emotional triggers first: the bathroom. “Organizing is a skill that take practice,” says Golightly. “Start where you’re likely to succeed and you’ll be able to tackle other areas more easily.” 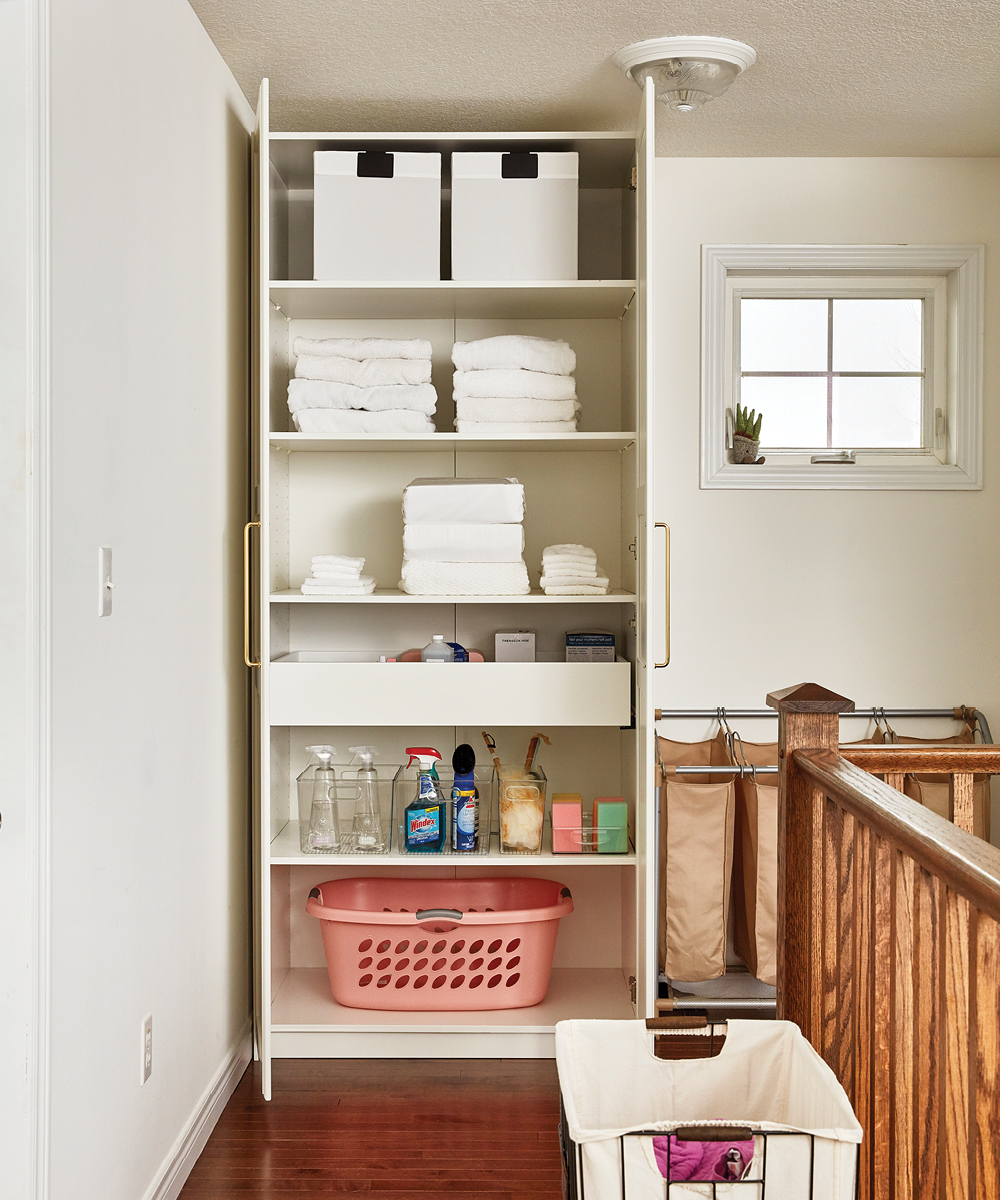 Laundry was always a chore for Landry. Not only does her family have a lot of dirty clothing to deal with, but they also don’t have a designated laundry room. She describes the small open-space alcove on the upper level of their home as a “laundry hallway,” where the mess quickly grew out of control until she felt like the best course of action was to avoid it completely. “I would just put a massive sheet over it because I was so embarrassed,” she says. “Everything had piled up.”

Before she and her team arrived, Golightly asked Landry to measure the laundry area, so she could order an Ikea PAX wardrobe to have at the ready to create a makeshift closet where the family now stores everything from towels to cleaning supplies. They also got rid of the laundry baskets that were acting as holding areas for clothing that wasn’t getting washed—and washed it all while they were at it.

Pro tip: Golightly stresses the importance of not having too many laundry baskets if you want to stay on top of your dirty clothing. Instead, run a load every day or every few days, depending on your family’s needs. 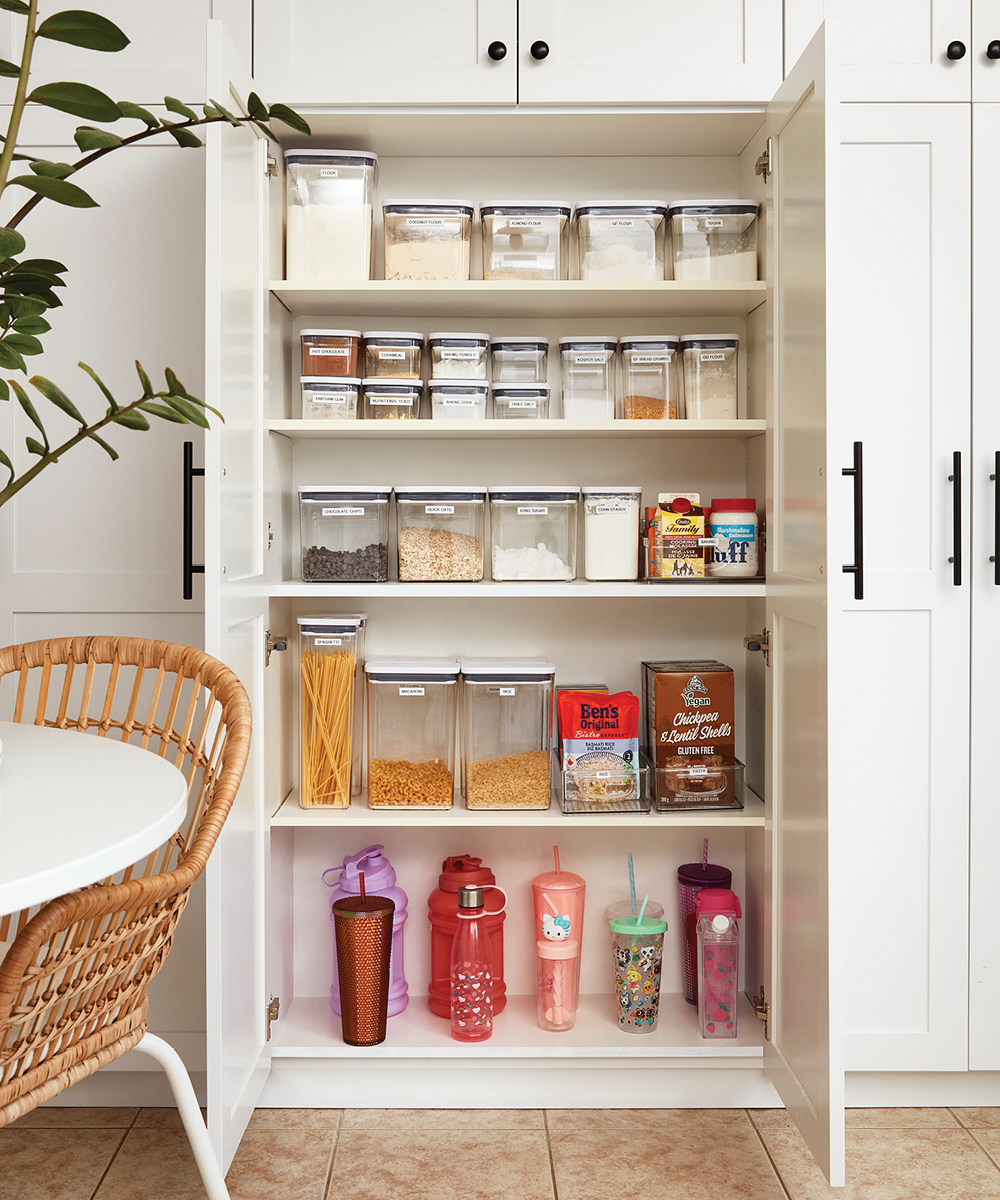 It’s been 10 months since Golightly and her team helped Landry get organized, but the family’s new habits have taken root. “I’m proud to see how well we’ve kept up and how easy it is to ‘reset’ when needed,” says Landry. Looking back on the process, she’s happy she shared it all on Instagram, a platform where flawless, highly curated homes reign supreme. Landry says an enormous number of women reached out to say they’ve struggled to get organized, too—and often feel overwhelming and paralyzing guilt. She now understands just how powerful decluttering can be, though she recognizes getting started isn’t easy and that huge resets, like the one she did with the help of Simplified, are not always possible. Sometimes, it’s about small steps. “I’ve learned that if you just chip away at things 20 minutes at a time, you can make a huge difference and ease your stress a little,” she says. “I don’t think I realized how much all this clutter was stealing my life.

A growing body of research shows that clutter affects our brains and bodies, leading to increased stress levels, insomnia and the inability to focus, among other things. “When you keep too many things, it becomes visual clutter, which turns into mental clutter,” says Golightly. When you get overwhelmed, your prefrontal cortex—the part of the brain responsible for decision-making—shuts down, which makes it extra challenging to start cleaning up. Here’s how to break that cycle.

Block off a day to declutter and give yourself time to focus. Think of it like a dentist appointment, she says. “You wouldn’t get your dental work done while walking through the house multi-tasking.”

Golightly swears by three questions, answered in three seconds: “Do I use this? Do I love this? Would I buy this again today?” If the answer to any of these questions is “no,” get rid of it.

3. Designate a spot for everything

“One of the reasons why you can’t put things away right now is because you haven’t done the work to set up those systems, so that everything has a place to go back to,” she explains.