A coat of paint, new hardware and an untiring sanding arm may be all you need to transform that sad piece in your basement, or the unassuming gem by the curb. These crafty bloggers did it, saving furniture from the landfill and giving it new and gorgeous purpose.

How to dress up an old dresser 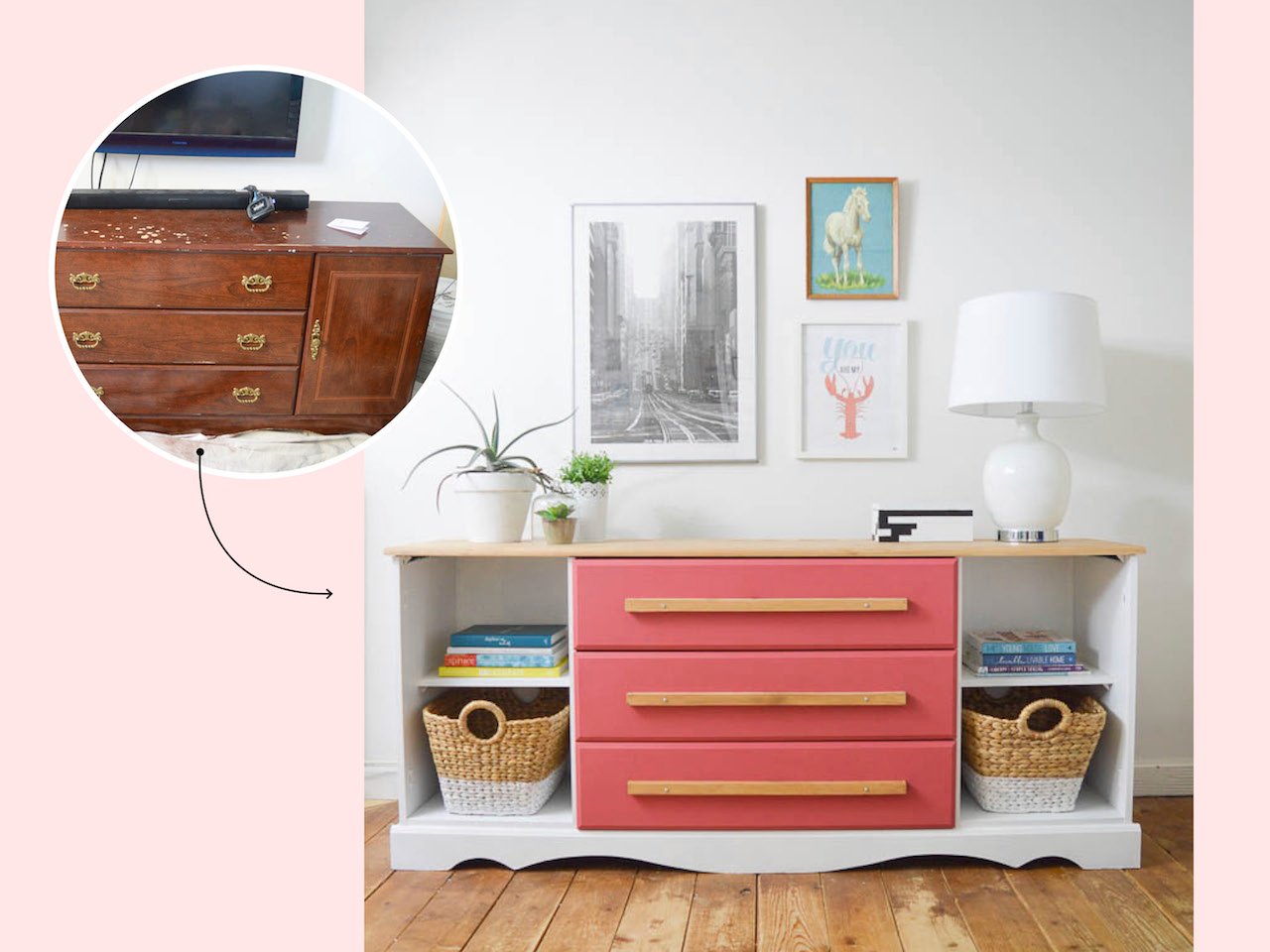 Level of difficulty: Moderately challenging—sawing is required.
Look around your home. Chances are you’ve got an outdated dresser—all glossy oak and gold handles— just like Erin Trafford’s. The Halifax DIY blogger converted her clunker into an adorable catchall for her two-year-old’s bedroom by adding a new top, custom handles and open shelves.

To begin, Trafford removed the hardware, the doors and the top piece, which was badly scratched. She primed it twice, then painted the sides and bottom trim bright white. She hit the drawers with a double of Blushing Bombshell (a vivid pink by The Fat Paint Company) lightly sanding between coats. She let it dry overnight then sealed the drawers with wax to lock in the colour.

The most ambitious part: making handles and a top piece out of maple. “I didn’t want to add another texture like metal for the pulls,” says Trafford who initially was going to paint the top as well. “I’m so glad I didn’t. The wood keeps it sleek and cohesive and gives it depth. I couldn’t love this credenza more!”

How to upcycle a tree trunk 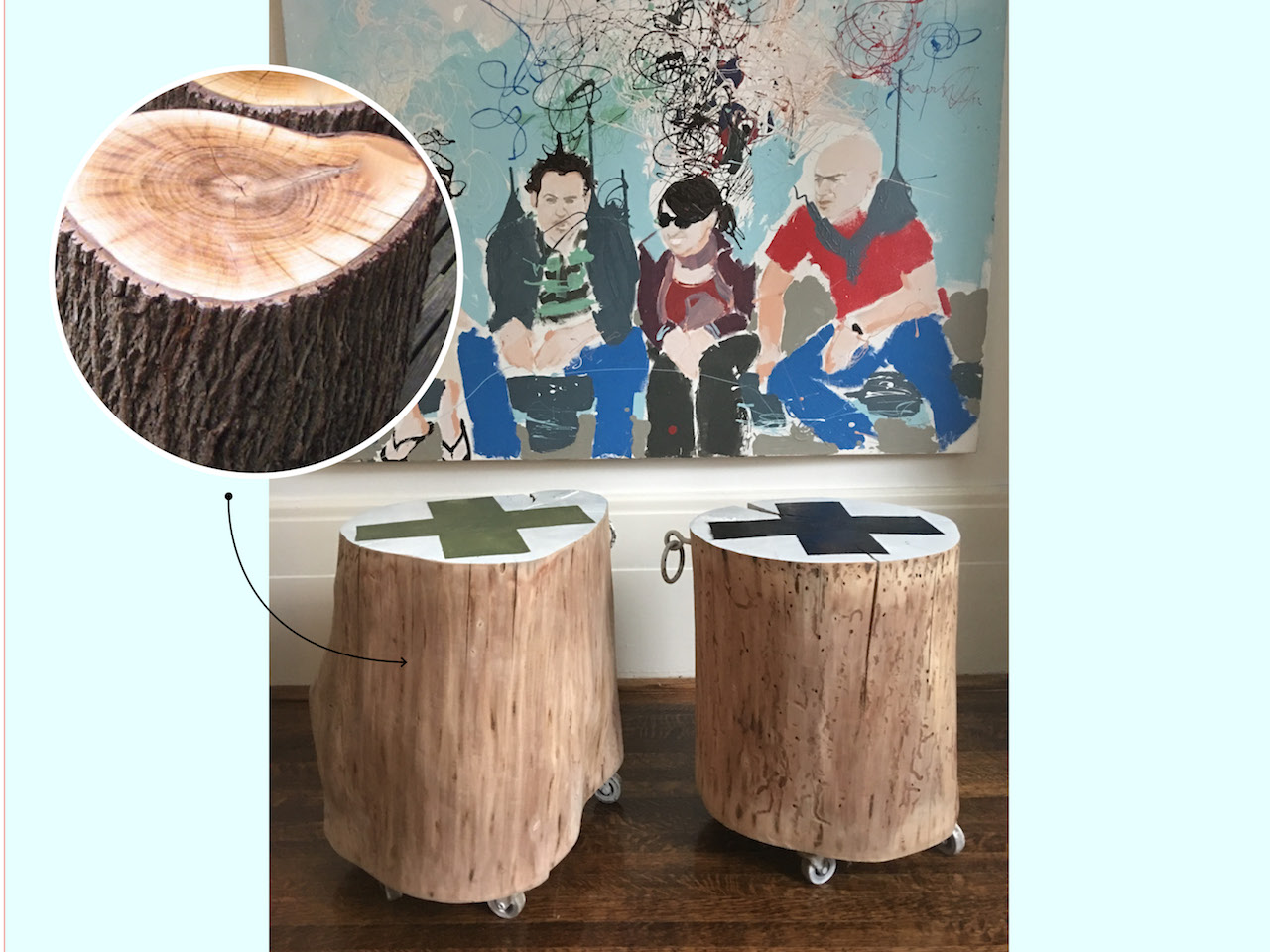 Timeline: If the wood is dry, you’ll be resting drinks on it in eight hours

Level of difficulty: Easy-peasy
Solid tree stumps bring a wild element to a room—they add texture and warmth and are easy to move around and use as tables or stools. Toronto artist Hilary Lipkin created this colour-blocked one from an off-cut from her garden. Drying the wood first is key. Lipkin’s took six months to dry because it was freshly cut. In her garage she set the stump on wheels, so there was circulation to air it out. What’s more, she could see if pools of sawdust collected underneath (which would indicate insects). “When the bark falls off, it’s good to go,” says Lipkin.

Lipkin used an angle grinder to clean and level the top, and sanded it to make it ultra-smooth. To play off the trunk’s grainy sides, she went bold and graphic with the top. She used two crossed strips of newspaper as a template for the cross, then used a ruler to paint it in with black-green acrylic interior paint, and sealed it. She left it to dry for four hours, sealing it with indoor varathane for a rich, glossy finish.
“The wheels and a pull are the finishing touches that make it pop,” she says. “Now it’s easy to move around.”

How to transform an old table 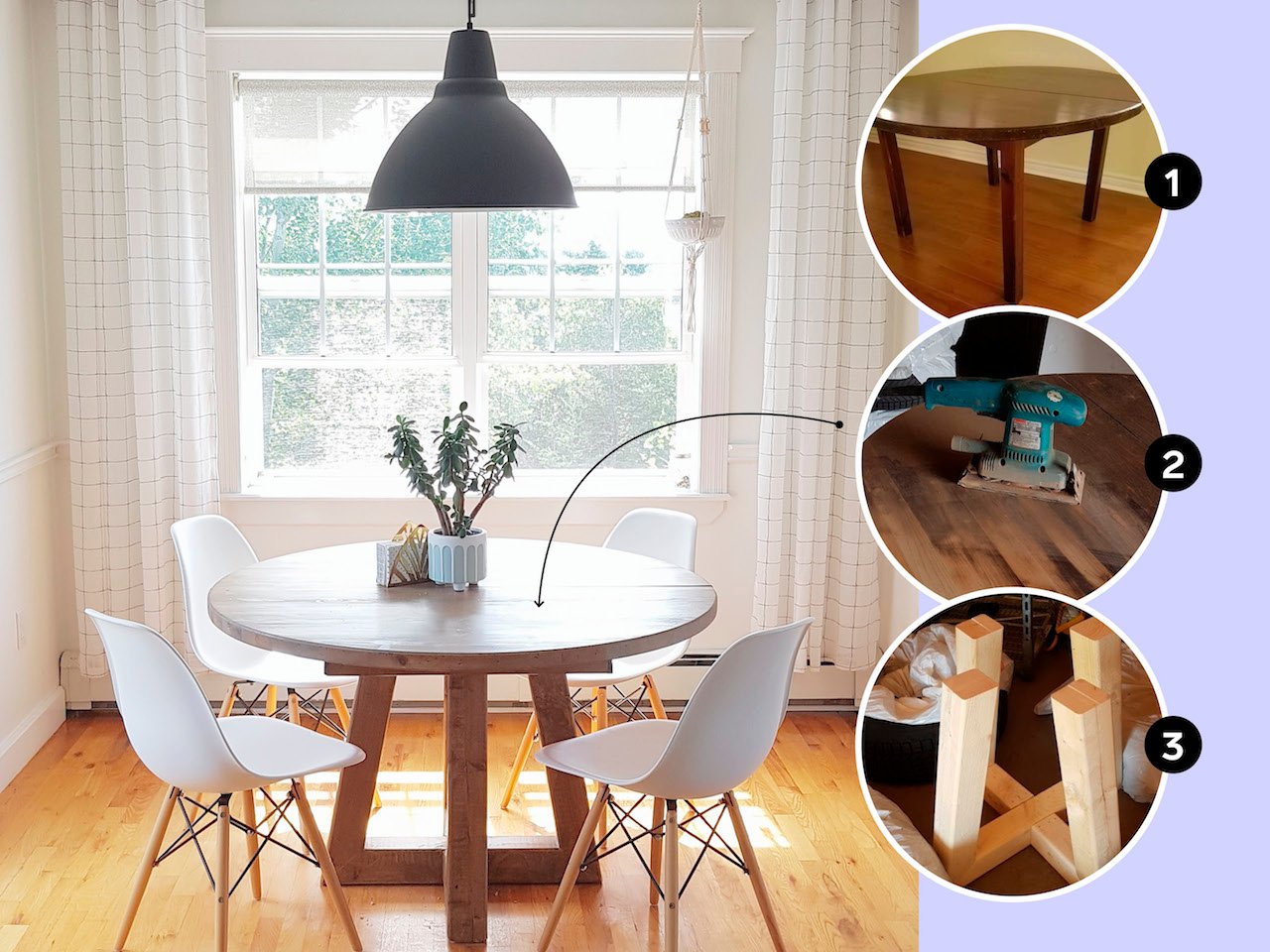 Timeline: Two arduous weeks of getting the colour of the old pine to look like the new one.

Level of difficulty: You’ll need a DIY support group, or at least a patient friend to get you through the pine-matching process.

Give an old table new legs and it’s instantly modern. Melissa Hilchey had her eye on a brand new table, but it was out of her price range. Instead, the Halifax-based hairdresser by day, maker by night, tackled her existing one instead, building a new base modelled after the one she was coveting.
Creating the base from scratch was challenging. Hilchey futzed around with the angles (and a table saw) for hours. Once she settled on the design, she made the permanent legs out of two 4×4 pine beams.

The next hurdle: sanding the old varnished top to match it with the new base. “It took me two weeks to get it right. I used paint stripper twice, and went through at least 20 pieces of sandpaper,” says Hilchey, who tried multiple stains in search of a match. “I had to keep the garage door open to have good circulation for the fumes, and a chipmunk ran in and was lost in there for a few hours. That was eventful.” But it was worth the effort, she says. “My table cost me $50, and the one I wanted is roughly $3,000.” She adds: “I’m so proud of it. It’s the first thing I’ve ever built! I just went for it, not knowing a thing about carpentry.” 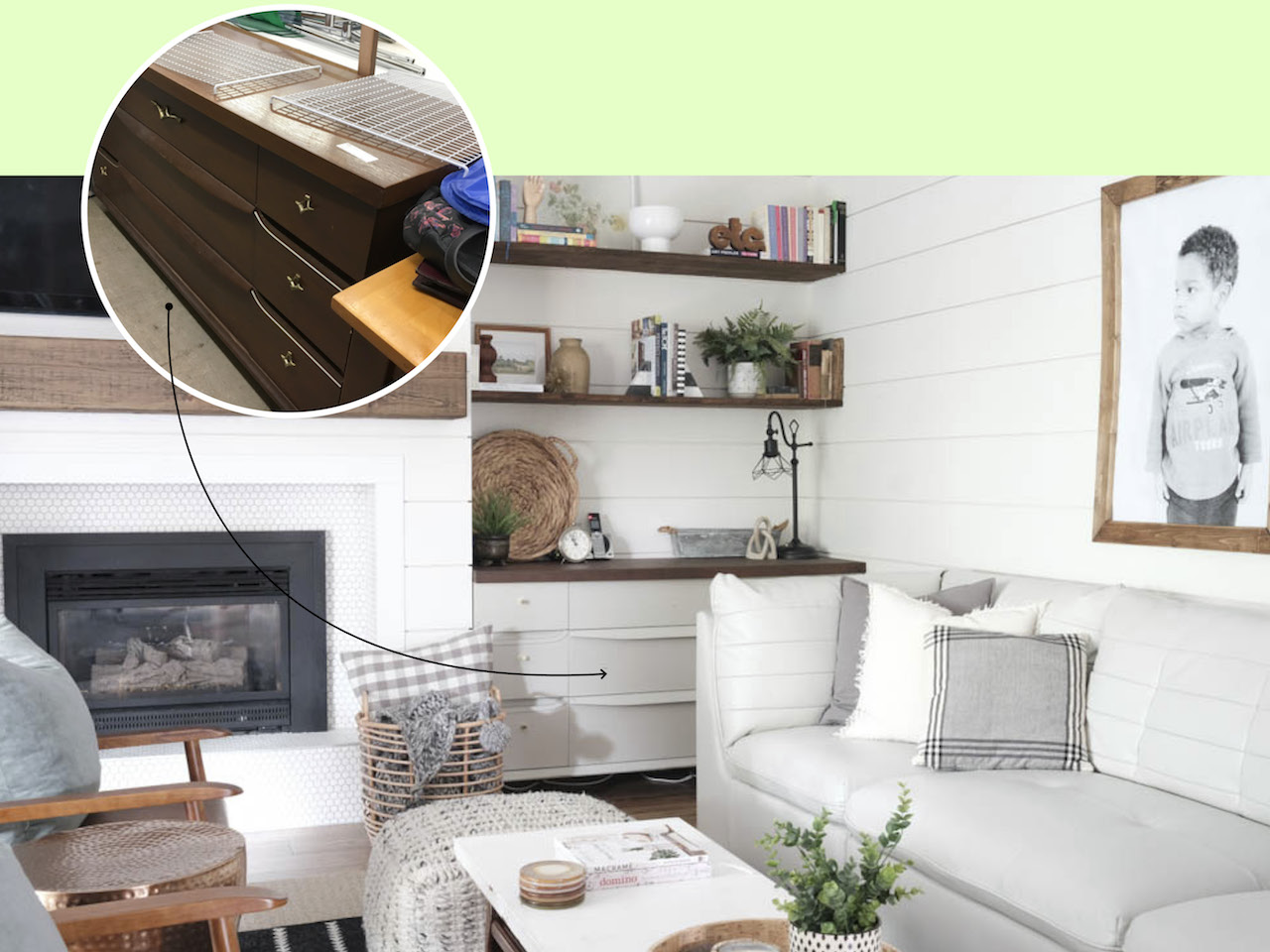 Timeline: Twiddle your thumbs as you wait three hours over two days for the wood filler and paint to dry.

Level of difficulty: Easier than you think.
Custom millwork instantly makes a room feel more pulled together (with a hefty pricetag to match). Thalita Murray, the Toronto blogger behind The Learner Observer, had a $30 thrift-store dresser she intended to use as a media unit in the basement. But after painting it, she realized it would fit in the nook beside the fireplace in her living room.

It was, however, a half inch too big, “so I did what any insane DIYer would do,” Murray says. “I took out the jigsaw and cut off 1/4 inch from each side, then squeezed the whole thing in.” Murray says it’s easy. “If you can follow a straight line, you’re golden! She swapped the hardware with gold cone-shaped knobs to keep the mid-century modern vibe, and styled the top with accessories. You’d never know it wasn’t bespoke.

How to redo your vanity 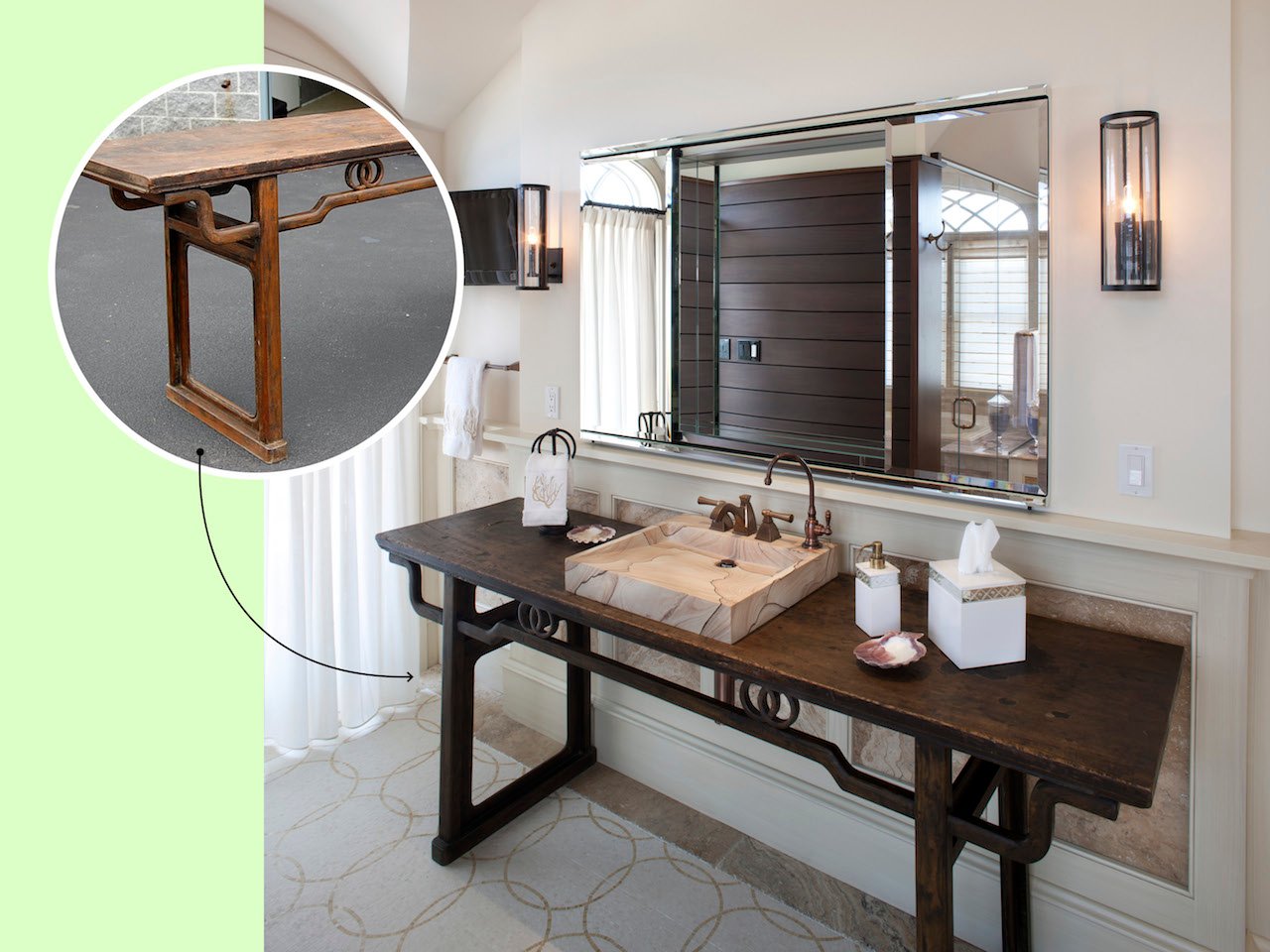 Timeline: One day and it was good to go.

Level of difficulty: Simple, if you know basic plumbing.
For a wholly original twist, Bruce Palmer turned an altar table into a bathroom vanity. The Delaware-based interior designer found the antique online and was immediately attracted to its scrollwork: “I liked that the circles echoed the overlapping ones on the floor tile,” says Palmer.

And adapting it for a bathroom was easy. The square stone vessel sink only required a tradesperson to cut a drain-sized hole in the table. (A traditional undermount sink would have entailed sawing a huge chunk of the table). The table was sealed to prevent water damage and it was ready for its debut in the master bedroom ensuite.

How to create art 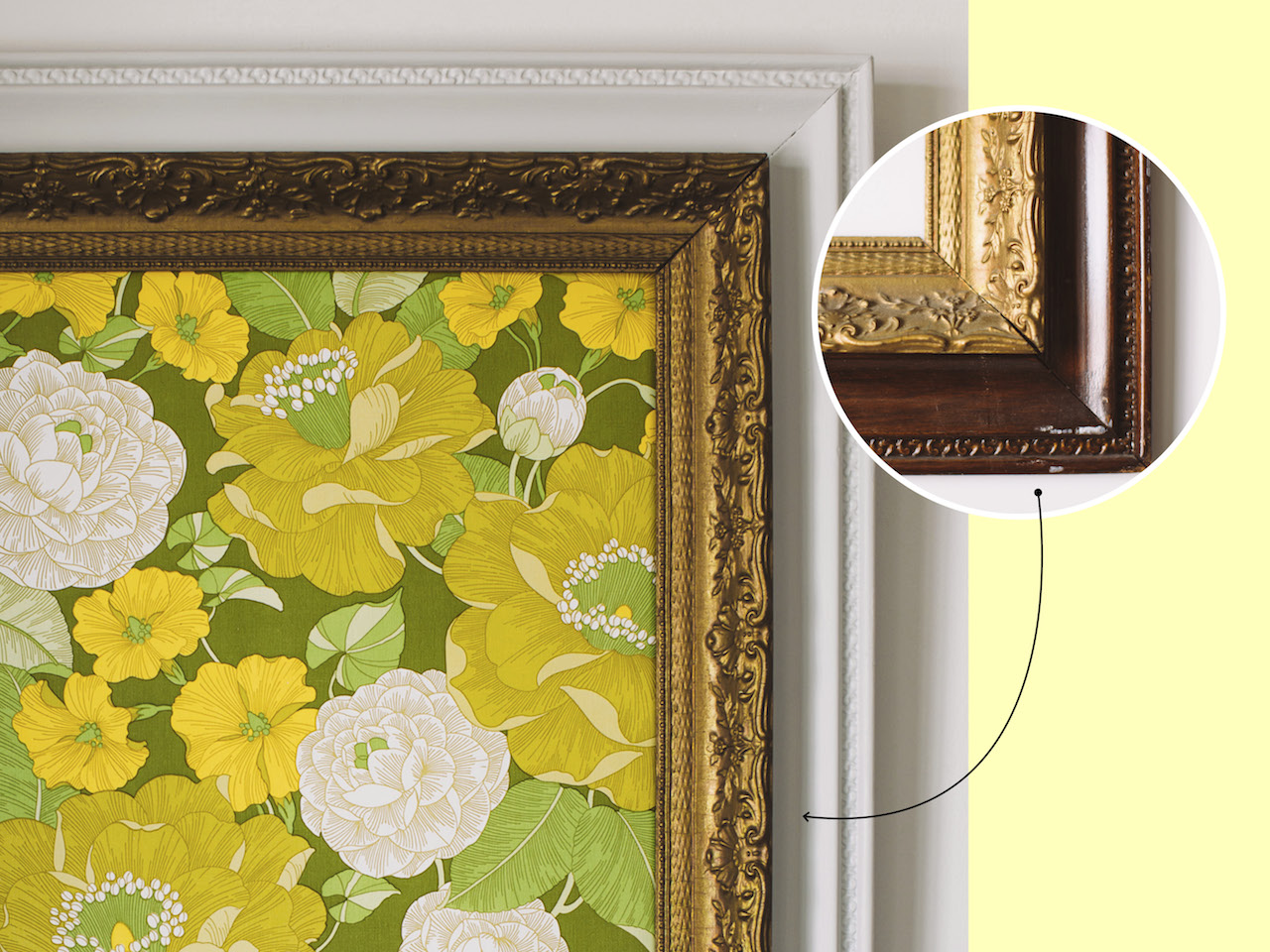 Timeline: Allow time for the hunt, but transformation takes only a few hours.

Level of difficulty: Easy peasy.
Vintage frames are everywhere. They’re hanging cockeyed in your aunt’s living room and discarded on sidewalks, often empty inside. They’re a fixture at flea markets, garage sales and thrift shops. Don’t pass them by! It’s easy and super rewarding to update a frame and replace the artwork that it holds if it’s not to your taste.

Toronto-based designer, Saskia Nichols had an old frame with nice ornate detailing, but its shiny wood felt fusty. So she painted it with Fusion Mineral Paint’s Lamp White and fixed it around a scrap of salvaged wallpaper she pasted onto a piece of cardboard. Nearly instant art!