Would lying about your age make you happier?

A little while ago, I heard a rumour. "She lies about her age," said my friend, nodding his head in the direction of a good friend's ex-girlfriend, who was just out of earshot. 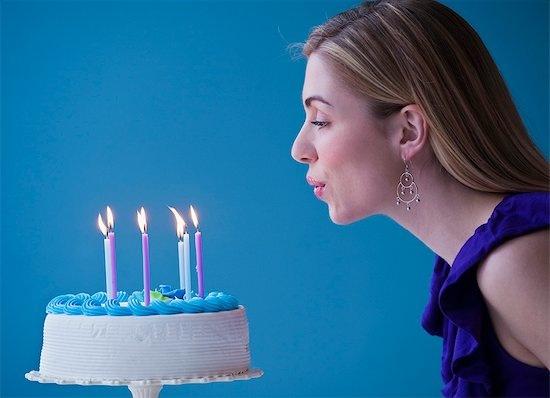 A little while ago, I heard a rumour. “She lies about her age,” said my friend, nodding his head in the direction of a good friend’s ex-girlfriend, who was just out of earshot. “I’ve known her for years, and there’s no way the math adds up. She’s taking off at least five years.”

The idea of lying about my age had never really occurred to me previously — and it certainly didn’t occur to me that anyone would start doing it so early. This woman — the ex-girlfriend — was taking herself from late thirties to early thirties, and apparently not fooling everyone.

I’m familiar, of course, with the general phenomenon of women lying about their age, but I had always figured that was reserved for the Golden Girls years. I can’t say that I blame women for wanting to be seen as younger, considering that society repeatedly informs us that youth and beauty are our key attributes. (Not to mention, the ticking of the biological clock, which reportedly becomes louder over the years and might even terrify potential suitors who see 35 as a reproductive cutoff line. It’s not fun to be perceived as almost over the hill before you’ve even really started the “adult” portion — cohabitation, serious career, kids, home ownership, etc. — portion of your life.)

I don’t like to consider myself excessively vain, and lord knows I don’t have the patience to spend more than 10 minutes on my hair even when prepping for a fancy situation. But somewhere around 30 I started to feel a genuine thrill when people mistook me for younger than I am — even when they were clearly just pandering. Last winter, visiting friends in Miami, I was actually carded in a wine superstore, which made me beam for days. And just a couple of days ago in Tel Aviv, standing in a long line for hot falafel and cold beer, the middle-aged man behind the counter winked at my boyfriend and asked if I was old enough to drink. That he was joking would have been immediately clear even to those with total sensory deprivation; but I still blushed and felt really flattered for a moment.

So what does that mean? I don’t think of myself as a member of the cult of youth; I think older faces and bodies are genuinely beautiful and more interesting. I have watched my mother, who proudly states her age as some sort of badge of achievement, become more and more lovely over the years. But will I suddenly hit 45 or 50 and decide that I don’t want that number to define the way people see me? Would I be happier if I could just say I was 33 forever?

I know that I won’t look 33 forever, and right now that seems okay. The idea of telling someone that I’m 33 when I’m actually 38, or that I’m 40 when I’m actually 45 just seems like a game I shouldn’t want to engage in. It’s a tacit agreement that women lose their worth as they age, and that all of the wisdom gained and the compassion and insight we develop is nothing compared to creases that appear in our skin. Right now, when I look in the mirror, I see the signs of time passing. I can’t say that it makes me completely happy, and I certainly haven’t skimped on skin creams. But I think I’ll be disappointed in myself if I can’t stay honest about how I earned every line.

Do you know anyone who lies about their age? What do you think about this practice? Please share your thoughts here.