Whether it's sticking to a schedule or switching up a routine, every Olympian has her own way of getting the job done.

Brought to you by Anita.

When you’re an elite athlete, competing is a pretty small part of your job. Most of the time is instead spent training — so much training, endless training, in the pool, at the track, in the weight room, day after day, after day.

So how do Olympians do it? We spoke with six of them about their tricks for staying motivated, focused and in ridiculously impressive physical form. 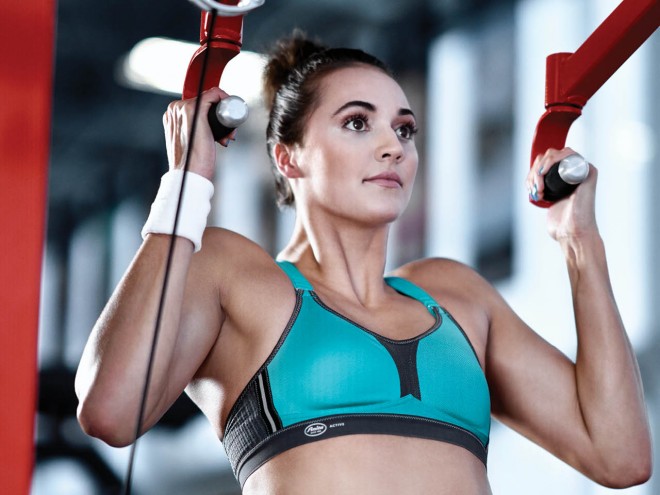 Her secret: Keep it fun
Calling Kylie Masse’s past 18 months productive would be a bit of an understatement. In 2015, she was 200th in the world in the 100-metre backstroke. But a couple adjustments — a new training program; a stronger final 25 metres; a fun team — and Masse blazed up the rankings, landing in the top spot this past February. She also nabbed a bronze medal in Rio and a silver at worlds in December where she competed before a hometown crowd in Windsor, Ont.

That kind of progress in the pool requires insane focus and determination, but sometimes Masse needs to do something completely different — so that’s when she goes to dance. “I’m from a small town: We did not have drop-in dance classes,” says Masse, who’s moved from Zumba to hip-hop and dance hall. “I’m not very good, but I love it.” Let the rest of us be reassured that on the dance floor, a world-class swimmer can still have a pair of left feet. 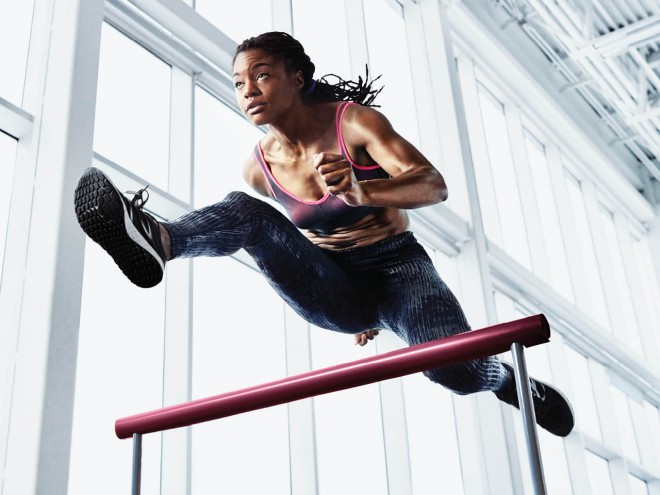 Her secret: Finish strong
Nikkita Holder isn’t exactly unacquainted with adversity. In 2014, a year after her son, Kaedence, was born, her marriage ended; the next year, she lost her father and a close friend. Then halfway through her semifinals at Rio, she hit a hurdle and came tumbling down. “I don’t remember the fall — I remember looking up and thinking, wow, I am on the ground,” she says. So Holder did what she’d become accustomed to: She picked herself up and pushed through to the finish line.

Awaiting her there? A torrent of encouraging messages and tweets. “I was blown away by the support I got in Canada,” Holder says. “It changed my outlook.” Accomplishment isn’t just measured in shaved seconds or podium spots — it’s also about finishing strong. That’s an approach Holden brings to training, even when she’d really prefer not to run another sprint or drill. Another weapon for her workouts: “Food, food and more food.” Granola, grapes, orange slices, corn chips, a handful of nuts — they’re all staples in her gym bag. “When I’m eating and I’m laughing,” she says, “then I know that practice is good.” 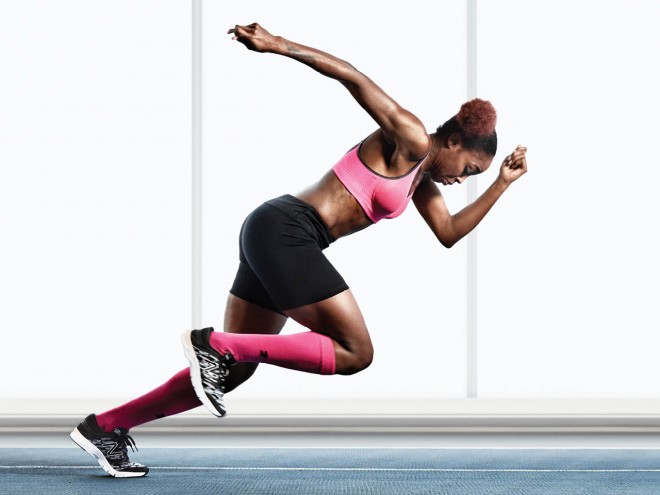 Her secret: Reward yourself
Crystal Emmanuel has been booking it since she was a baby. “My mother tells me I would never walk, I’d always run,” she says. “I like to go fast. I also like things to be over with quickly.” That don’t-look-back attitude has served the Canadian champion and two-time Olympic sprinter well. In Rio, after running a disappointing 100-metre race on sluggish legs, Emmanuel refused to dwell on her performance. Instead, she poured everything into her 200-metre. “My warm-up was great, my knees were in the right position and I blazed my whole way home.” When she crossed the finish line, it was at 22.80 — a personal best.

Emmanuel concedes she can sometimes be a reluctant trainer, so she’s developed a few well-honed tricks to keep her motivated. Her teammates are a reliable source of inspiration, as is a hook-heavy playlist of tracks from Beyoncé and Empire. And there’s always good old fashioned bribery. “If I run down the street to the store and back, I can buy whatever snack I want,” Emmanuel says. The bigger the victory, the greater the reward — with that personal best snagging her a new pair of Jordans. 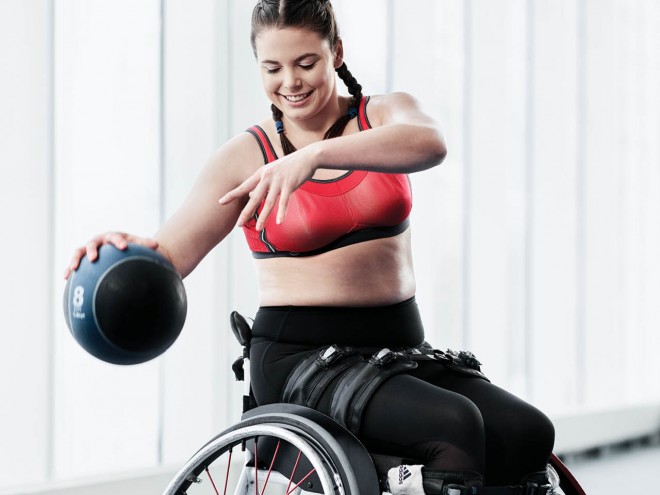 Gavel won an athletic scholarship to the University of Alabama, with whom she won second place in the National Intercollegiate Championship in 2014. Photo, Anya Chibis. Bra, Anita. Leggings, H&M.

Her secret: Listen to your body
As a varsity player with the University of Saskatchewan Huskies, Erica Gavel split her time between two places: the classroom and the basketball court. But mostly the basketball court. “I like pushing myself physically and mentally,” she says. “The hardest thing as an athlete is to feel satisfied.” Then, during a 2012 workout, Gavel’s femur collided with her tibia and shattered her knee, ending her basketball career. “I didn’t know when to back off,” she says. “I overtrained and injured myself out of sport.”

But Gavel’s trainer discovered she was eligible to play wheelchair basketball, and a brand-new career exploded: Within two years, Gavel had made the women’s national team, and two years after that, she and her teammates placed fifth at the Rio Paralympic Games. Now, with an eye firmly trained on Tokyo in 2020, she’s mindful not to make the mistakes of the past. She no longer concerns herself with the quantity of her workouts, just the quality. “I focus on my shoulders, or my wrists; my body awareness has gone up tenfold,” she says. And as bonus? She no longer feels pooped all the time — just strong. 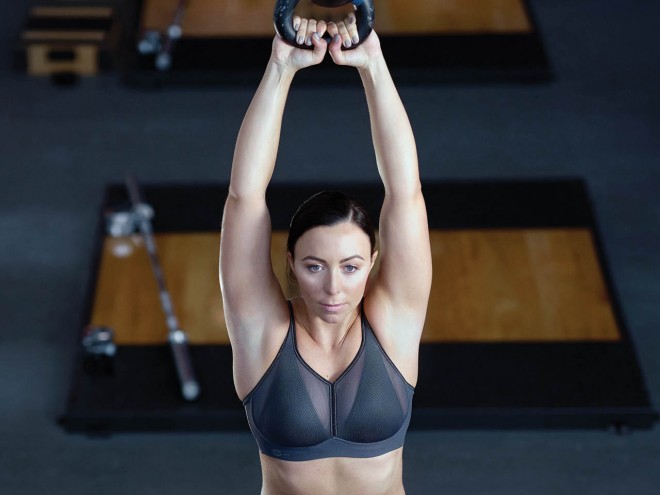 Her secret: Stick with the plan
The thought of an afternoon spent sailing conjures images of open water and a placid mind — unless, of course, you’re Olympic sailor Brenda Bowskill. To get ready for each regatta — which consist of two hour-long races a day for up to seven days straight — Bowskill and her coach will pour over topographical maps, identifying different depths that will affect the currents, studying cloud formations, weather systems, cold fronts and warm fronts, so she can react to changes in the wind and the waves.

It requires a boatload of preparation. But whether you’re looking to knock off your first 5K or make your second Olympics, Bowskill is a firm believer in working out with a plan. “I’m very structured: I have a four-year schedule, a two-year schedule, a schedule every day until worlds,” she says. “I know exactly what I’ll be doing on June 3 at the gym.” The schedule helps keep her accountable, and it breaks down a giant ambition like Tokyo into manageable parts. “Otherwise, it can be really challenging to stay motivated,” Bowskill says. “Because sailing is a long game — it’s not a sprint.” 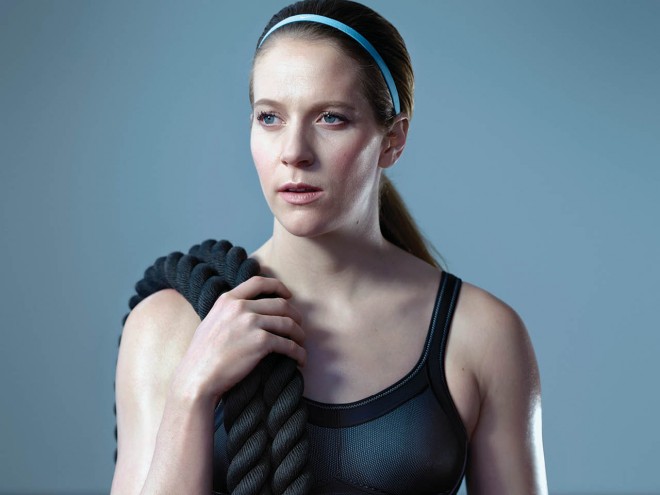 Her secret: Sweat the small stuff
The youngest of four fantastically sporty siblings, Martha McCabe spent her childhood trying hard to keep up. Each summer at their cottage, the family would stage the McCabe Olympics, a flurry of first-to-the-raft swim meets, sandcastle building, long-distance runs and sprints. “I was tiny, but I really wanted to compete,” says McCabe.

Of course, to become a two-time Olympian and Pan Am silver medallist, she needed to shift her priorities: “You don’t just want to keep up, you want to take the competition down.” The breaststroke became her trademark. “You could be this big, extremely fit person, but if the timing of your kick and pull are not in the right exact order, you’re going to go slow,” McCabe says. “It’s all the little pieces that make you a great breaststroker.”

Though she retired after Rio, McCabe still adheres in her workouts to the same philosophy that fuelled her Olympic training: sweat the small stuff. Focus on keeping your weight in your hips during a spin class, or stabilizing your core through a push-up, or relaxing your hands on a run. “Those details take a lot of patience and are easy to overlook,” McCabe says. But they’re the ones that matter most — whether you’re crushing it on the international stage or blowing past your sister in a race to the raft.

More:
Get strong: 3 moves for your arms
Chatelaine Quickies: Baked asparagus fries
Here’s why it’s only going to get harder to put down your phone