Should You Change Your Masking Habits In The Winter? 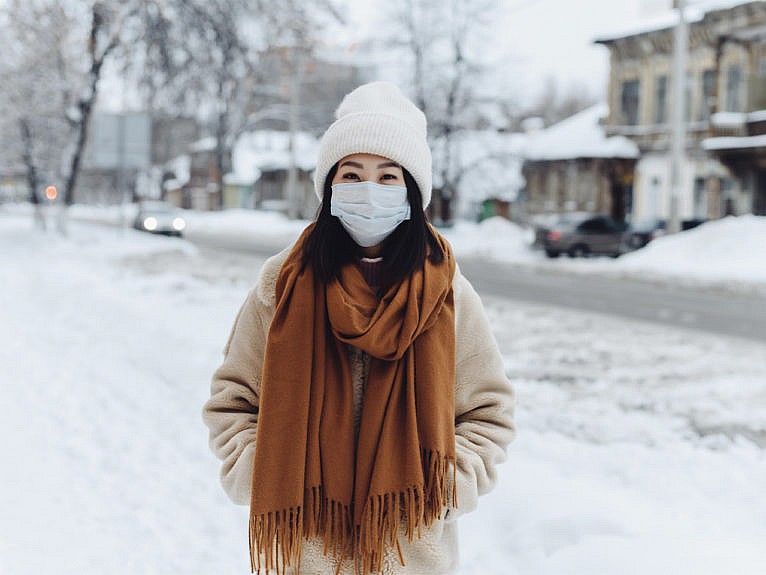 We’re almost a year into the pandemic, and while there’s a vaccine rolling out, masking and social distancing remain crucial. Aside from what we already know about protecting ourselves, is there anything different we should be doing when it comes to wearing a mask in the cold weather? We asked two health professionals all of our winter-masking related questions.

Does COVID-19 transmit more readily outside in the cold?

There’s no evidence to suggest that the transmission of COVID-19 happens more easily in frigid temperatures. “There’s been some suggestion that the virus might be a bit more stable on surfaces that are colder. But we don’t truly know if it transmits better because of temperature or humidity differences,” says Dr. Susy Hota, medical director of infection prevention and control at the University Health Network in Toronto.

“The most important thing to remember is that COVID-19 is much more likely to transmit if you are indoors with someone,” says Dr. Alexander Summers, associate medical officer of health at the Middlesex-London Health Unit in London, Ont. “The potential for transmission of COVID-19 outdoors certainly exists, but it’s substantially less risky than indoors. The key thing is how close you are to someone outdoors, [because that causes a higher] risk of transmission.”

When should you wear a mask outdoors?

“If you’re not able to reliably keep at least two metres of distance from people while outdoors, then wear your mask, because it will add a layer of protection,” says Hota. She adds that transmission is dependent on a number of factors, including how close you are to someone and whether you’re indoors or outdoors.

“In an outdoor setting, transmission is 20 times less likely than within an indoor setting, because the air is constantly changing around you. Walking by someone transiently is much lower risk than standing as a group huddled in the cold, while your kids are playing on a playground, for example. That would be more [of a] congregation, and the risks would start to go up.” The bottom line: If you’re unsure whether you can keep a proper distance, says Hota, put your mask on.

“It gets harder over time, as there’s so many different points of decision-making that we have to make for people to adhere to,” says Hota. “In an ideal world, we could just give people a set of principles and say, if you’re going to be in these circumstances, that’s when you would want to use a mask.”

Ultimately, you’ll need to weigh each situation individually by taking into account how long you’re going to be in contact with somebody, how close you’re going to get and whether you’re going to be indoors or outdoors. “I think we’ve reached a point where simplicity has its value,” says Hota. “If it’s just easier for people to be accustomed to bringing their mask with them and putting it on before they leave the house, then maybe that’s a better way to go.”

Does time of day have any effect in the transmission of COVID-19?

There’s no impact on the transmission of COVID-19 due to the time of day, Hota and Summers say. That said, going outside during off-peak hours, when there’s less foot traffic, means you’re less likely to come into close proximity with other people.

What type of mask material is recommended in the winter?

The Public Health Agency of Canada advises the use of three-layer masks, but from a transmission perspective, there is no material recommended above any other, says Summers.

“As you breathe in and out in the cold weather, there is condensation on the inside of your mask,” Hota says, adding that some materials hold in moisture better than others, which is a double-edged sword. “Moisture grabbing-type materials like cotton, which is recommended for the inner layer of your mask, may retain some of that moisture a bit better, which is good for keeping your droplets in and not exposing them to other people, but might actually make your face covering get damp quicker in the winter.” If your mask is getting damp and not drying, Hota advises bringing extra masks with you to change into throughout the day.

Should we continue to wear masks during cold and flu season every year, post COVID-19?

“We’ve seen an almost absent influenza season this year so far. Some of that [is because] we saw a bit better uptake in the flu vaccine, to my knowledge. I think a lot of it [also] has to do with people not congregating as much in indoor environments. Masking may be playing a substantial role there, too,” says Hota. “It’s hard to separate these things, because we’re putting the measures in place together at the same time. But [every year] I would love to see less respiratory viruses that land people in hospitals. I think it needs to be looked at from a policy perspective, but as a healthcare epidemiologist, I would definitely support that. If it helps protect people around me from getting sick, I would do it.”