Michelle Obama and the USDA unveiled the new My Plate icon last week to show Americans how to eat, replacing the food pyramid. "We have time to take a look at our kids’ plates. As long as they’re half full of fruits and vegetables, and paired with lean proteins, whole grains and low-fat dairy, we’re golden. That’s how easy it is,” Obama said in a press release. 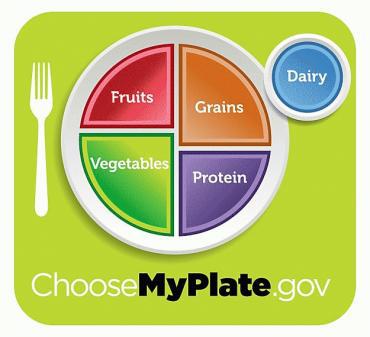 Michelle Obama and the USDA unveiled the new My Plate icon last week to show Americans how to eat, replacing the food pyramid. “We have time to take a look at our kids’ plates. As long as they’re half full of fruits and vegetables, and paired with lean proteins, whole grains and low-fat dairy, we’re golden. That’s how easy it is,” Obama said in a press release.

The general diet advice remains similar, however — the new guidelines emphasise cutting down on salt, maintaining portion size, and continuing to restrict saturated fat. So the point of the new icon isn’t to distribute new information, it’s to do a better job of making it understandable.

So how did it do? We asked Bonne Zabolotney, dean of design and dynamic media at Emily Carr University, who’s worked with hospitals and health-care design, for some feedback on the new look. Here’s her breakdown:

The concept
“It makes more sense than a pyramid. It makes the information a little more intuitive — you look at the portions on a plate, and you can almost replicate those portions. You make those connections right away, immediately thinking that fruits and vegetables should take half the plate — it doesn’t take long to memorize it. And you can visualize the portion better than with the old pyramid, which didn’t really bear any relationship to what you were eating unless you actually stacked your food on your plate.”

The look
“It’s pretty hamfisted, as far as the visual language goes. There are a lot of thick lines — there’s something quite primary about it. It’s not a sophisticated type of graphic. Maybe they’re overcompensating for the food pyramid being too complex or opaque. I’m guessing simplicity was the goal, but unfortunately sometimes when you reduce things down to their symbolic value, it doesn’t always look beautiful.”

The colours
“The colour choices is a little more difficult. It doesn’t quite make sense. I’m not sure why  purple would be protein, for example. I would choose something that would be a little bit more related to the colour of food and doesn’t become so clinical that you can’t relate to the food. And when something’s overly simplified it can become too clinical, when you see a little purple pie wedge that simply says protein, it does become problematic.”

The font
“I would say the typeface they chose here is kind of curious, it is quite bold and it has a little bit of a serif to it, which is almost unnecessary detail for something that needs to do the job. And then when you see a word like ‘vegetables’ just crammed into the widest part, it starts to feel quite awkward. So the typeface feels a bit like an afterthought.”

The takeaway
“I worry that people are eating more out of cartons than they are on plates, so I hope the metaphor of the plates is still strong enough. If it were say an interactive graphic, I would hope that you could click on grains and get all sorts of information about grains. So this doesn’t simply become this overly simplified platitude. It is inspired, it’s a good start, but it’s a bit of a false start. I think for people who do start to take things very seriously, they’ll want to have a bit more information.”