I think it's fair to say that most women are consumed by cutting down their consumption. Even the most independent, strong-willed, confident and smart women I know will acknowledge being concerned about their waistlines - even if they're not overweight. 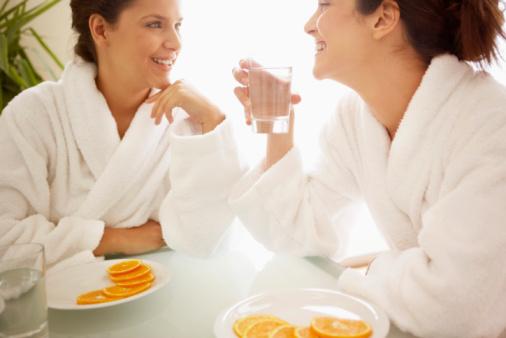 I think it’s fair to say that most women are consumed by cutting down their consumption. Even the most independent, strong-willed, confident and smart women I know will acknowledge being concerned about their waistlines – even if they’re not overweight. And for women who do consider themselves overweight, the idea of permanent weight loss, of attaining some sort of physical ideal (as ordained by society in general), remains the holy grail of accomplishments – even if they seemingly have everything else going for them.

But have you ever considered that losing weight might mean giving up more than just pounds? A recent story by Jessica Yadegaran in the Detroit Free Press – Even close relationships can falter if one loses weight – explores one possible fallout from slimming down. Writes Yadegaran: “You certainly don’t expect it to happen, but it can. Meeting a weight loss or fitness goal, especially a significant one, often shifts the dynamics of your interpersonal relationships. Friends say you’re different, and that they have to get used to the new you. Your wife is suddenly more affectionate, and you wonder why you waited a decade to drop that beer belly.” One woman told Yadegaran that she lost 35 pounds on the South Beach Diet and then had to deal with co-workers (to whom she was formerly close) sniping behind her back. “Every time I brought up something exercise- or food-related, it felt really awkward,” she told Yadegaran. “I think they were disappointed that I wasn’t part of their cupcake recipe circle anymore.”

When it comes to weight, most women feel judged no matter what the scale says. Women who are perceived as thin or attractive are often maligned or distrusted by other women. Women who are perceived to be overweight are often mocked, pitied or patronized, the assumption being that they can’t live a full life in such a full body. But if you’re unhappy with your life, weight loss is not going to be the one-stop solution that many women who struggle with their weight seem to think it is. While not everyone who loses weight has a subsequent problem with friends and family, it’s worth noting that relationships often take a hit when one of the parties starts making changes. That’s not a reason to avoid healthy changes, but it is something to keep in mind if you’re preoccupied with the scale. Plus, the article only discusses weight-related fallout with other women – which doesn’t surprise me. Too often, women view each other as competition instead of trying to help each other to accomplish the things that will make them happier.

The Free Press story offers some tips on how to deal with relationship issues that arise from weight loss: initiate a dialogue about your own needs and feelings, and encourage your friend to open up to you about theirs; and find ways to honour the routines and traditions of your relationship, without sacrificing your commitment to yourself (e.g., if you used to get together every night to eat cheesecake, maybe suggest going for a walk together instead). While it’s important to make sure that your needs are met and that you have people in your life who support any positive changes you want to make, it’s also worthwhile asking yourself what you’re doing to help the ladies that you love. If we all help each other a little more – when it comes to weight, work, love or any other matter – we’ll all be a little happier.