Wigged out: What it's like to have alopecia areata

With new treatments on the horizon, Chatelaine's Jessica Galang is cautiously optimistic about the future for alopecia areata sufferers. 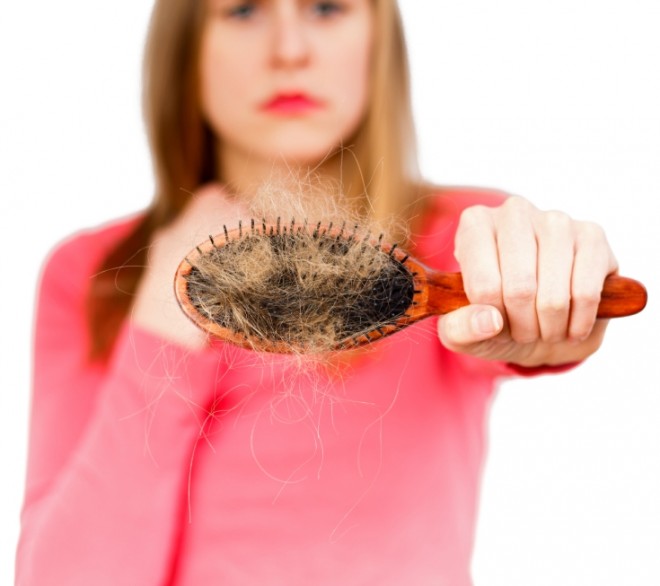 At a time when most 16-year-olds are mulling over prom dresses and post-secondary plans, I was thinking about new hairstyles to cover my ever-growing bald spot and dermatologist appointments where I’d be told the same thing: “There are no guarantees.” Just before my graduating year of high school, I was diagnosed with alopecia areata, an autoimmune disease that causes the body’s immune system to attack the hair follicles, usually on the scalp. The disease is highly unpredictable; some people can live with small spots that can easily be covered, others go through phases of hair regrowth and loss; and some lose the hair on both their scalp and body completely. Unluckily for me, within six months of my first bald spot I was almost completely bald, had very little eyebrow hair left and had lost all of my body hair. It didn’t help things that I was at an age where many girls’ self-esteem is at their most fragile.

With the support of my best friend, I cut off the few single hairs that were still clinging to life, and with that came the acceptance that I had this disease. While I was afraid to go to school without a wig, there were some public places where I’d go bald and play it off as a fashion statement. My first year of alopecia areata was marked by tears and anxiety, but the disease allowed me to find confidence I never knew I had.

My experience of grief, loss and acceptance is familiar among those with alopecia areata — compared to life-threatening conditions like breast cancer, hair loss is not exactly a research priority, so if common treatments like steroid injections don’t work, then acceptance is the only option. But recently, researchers at two universities may have found an unlikely treatment. At Yale University, an arthritis drug called tofacitinib was tested on a man with alopecia areata — his hair grew back within a few months. Similarly, researchers from Columbia University discovered another arthritis drug, ruxolitinib, treated three patients with long-term alopecia areata. They also identified the immune cells responsible for destroying the hair follicles — the answer to a question researchers have been asking for decades.

“There hasn’t been a development in research that has had an impact in decades,” says Colleen Butler, the current president of the Canadian Alopecia Areata Foundation (CANAAF). “It’s still early, but we’re excited to see where it’s going to go.”

Butler’s organization provides community-based support to those suffering from alopecia. And she’s an alopecia areata sufferer as well. The Toronto lawyer was first diagnosed in her early 20s, but at 28, after the birth of her first daughter, her hair started falling out at a more aggressive pace. “I went into panic mode because at that point, I didn’t realize I would get to a place where I’d have to get a wig,” she says, noting that her condition had been fairly manageable since she first  noticed it in law school. “But the idea of having a wig meant that I accepted my permanent condition.”

She began looking for support groups in Toronto and attended a picnic for sufferers in the summer of 2007. There she met the people who she would start CANAAF with. In 2009, they became a charity and an umbrella for support groups. “Your friends will support you and help, but they really don’t understand what you’re going through,” says Butler. “It’s hard for people with alopecia areata not only to have to go through hair loss, but to have to explain this crazy disease to people who have no context for it.”

While those with alopecia areata patiently wait for more trials on the arthritis drugs, Toronto dermatologist Dr. Sam Hanna warns that it’s still too early to call it a treatment. The challenge, says Hanna, is that these drugs were originally brought to market for other diseases. “When it comes to using them for alopecia areata,” he says,  “we have to see if it’s safe, what the long-term consequences are and the actual benefits.”

Even for him, dealing with patients with alopecia areata can be emotionally taxing. “It really plays on the self-esteem in a fundamental way, and I feel my patient’s discomfort and pain,” he says. “And there’s more social acceptance for men’s hair loss than women, so these are often tearful conversations.”

Using ruxolitinib and tofacitinib as effective treatments, if even possible, is many years down the road. For now, people with alopecia areata will do what they’ve always done: Develop a self-esteem of steel and continue to support each other. “It’s made me realize that I can handle what I never thought I could,” says Butler. “I had to face my worst fear, that I would lose all my hair. And I was okay, I am completely okay.”