Why you should choose more chocolate

“When I get older, I’m eating whatever I want! I may or may not work out, but I’m going to eat and drink whatever.” -many of my friends You know how many times I’ve heard this? 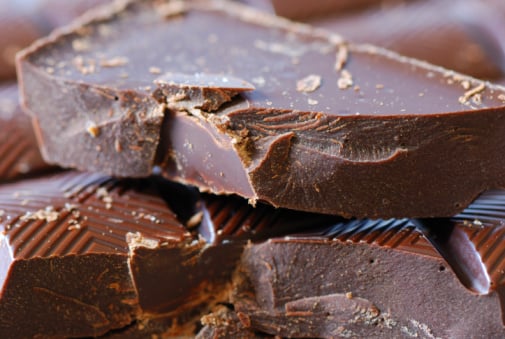 “When I get older, I’m eating whatever I want! I may or may not work out, but I’m going to eat and drink whatever.”-many of my friends

You know how many times I’ve heard this? And it’s most often from women who are portion sizer-uppers, Skinnygirl Margarita orderers and passing-on-the-breadbasketers.

Well, read this and whoop ladies—a new study says older women who regularly eat chocolate are likely to have healthier hearts, reports the study from Sir Charles Gairdner Hospital in Australia. That’s enough to make any woman happy, right? So while chocolate often does our mood good, it also does our body good—the study examined women over 70 years old who ate chocolate at least once a week. Of the women studied, those who ate that much chocolate were about 35 per cent less likely to pass away from heart disease, say reports.   Pretty good news to look forward to, don’t you think?

Meanwhile, you don’t have to wait until you’re over 70 to enjoy a Willy Wonka-like confection because chocolate at any age can offer a few health boosts, says Natalie Brown, a registered dietitian in White Rock, B.C. “The best type of chocolate for you is a dark chocolate since it contains enzymes that help regulate blood pressure,” says Brown. “Cocoa also contains flavenoids which lower the LDL (bad) cholesterol and reduces the hardening of the arteries.  Cocoa does have anti-inflammatory properties as well as antioxidants.”

If you are going to nosh on some of the good stuff, remember to follow Brown’s tips on how much and what kind to take.

* Eat up to 3.5 oz. of dark chocolate daily to get your health kick. “But in order to accommodate the chocolate in our diet, calories would need to be equivalently reduced with other foods in the day to make room for the chocolate and not gain weight,” reminds Brown.

* “Choose a dark chocolate with at least 65 per cent or higher cocoa content,” she suggests. And opt for dark chocolate containing nuts or orange peel over calorie and fat-rich fillings such as caramel, nougat or mint fillings.

* Should you go for organic chocolate? “There’s no difference on the heart health effects,” says Brown. “The possibility of the cocoa powder containing pesticides could be an issue for the non-organic but I don’t think it is worth the extra money you would pay to have organic chocolate.”

Time to grab me a Hershey bar…