Why listening to a one-sided conversation is so annoying

Scientist pinpoint why the loud-talker on the bus drives you so crazy. 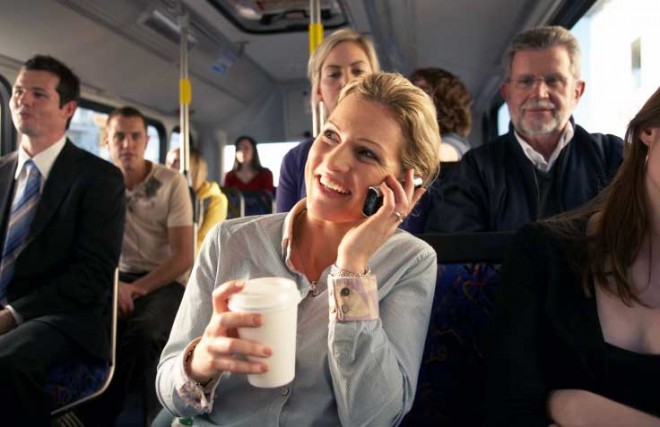 One of the most irritating things about public transit? Loud talkers! (Photo by Getty Images)

There are few situations more annoying than being stuck next to someone — whether it’s on a bus, a subway train, or in the waiting room of the dentist’s office — who is talking loudly on their cell phone.

The snippets of conversation you’re forced to overhear and yet can’t comprehend the full meaning of—the ‘yeses’ the ‘uh-huhs’ coupled with the suspense of trying to piece together a narrative out of all of those broken bits of conversation — it’s enough to drive a person around the bend and back again.

This kind of forced aural assault is all-too-common and perhaps as a result it tops most people’s list of quotidian annoyances — it’s right up there with the person on the bus who is listening to the loudest MP3 player ever fashioned by human hands and blissfully unaware that you can hear every lyric of Single Ladies while you’re trying to sleep.

So high on the scale of modern aggravations, the effect of second-hand cell phone conversations on bystanders has become the subject of scientific study.

Researchers at the University of San Diego confirm what most of us without advanced degrees in psychology already know: other people’s cell phone conversations aren’t just infuriating to the unwilling auditor, they are distracting and invasive and can interfere with concentration. The reason they’re SO annoying comes because of the mental strength it takes to listen to only half a conversation. Yes, a face-to-face conversation that’s too loud is also wholly annoying, but only hearing half is what sends us over the edge.

This effect is the cumulative result of a handful of factors — primarily you’re a prisoner in such a scenario. You can’t escape the sound of someone else’s voice and yet, at the same time, you can’t surrender your natural curiosity about what the heck the woman next to you is talking about either.

It’s what philosophers call a dilemma.

So, what’s a person to do to ameliorate the aggravation of another’s an audible yet incomprehensible cell phone conversation? The bold among us might ask the person speaking on the phone to lower their volume. Meeker souls may just reach for a pair of headphones and attempt to drown out the noise with their own music or audiobook.

More civic-minded types could always carry a handful of printouts of the study, making it a personal mission to leave them scattered in bus stops, subway stations and doctor’s offices, hoping that by spreading the word public manners may benefit.

Where’s the most annoying place you’ve heard someone talking on their phone?