Why are you so tired?

Too many sleepless nights could be the sign of a hidden health problem. We’ve uncovered three surprising culprits — and what you can do to stop tossing and turning tonight. 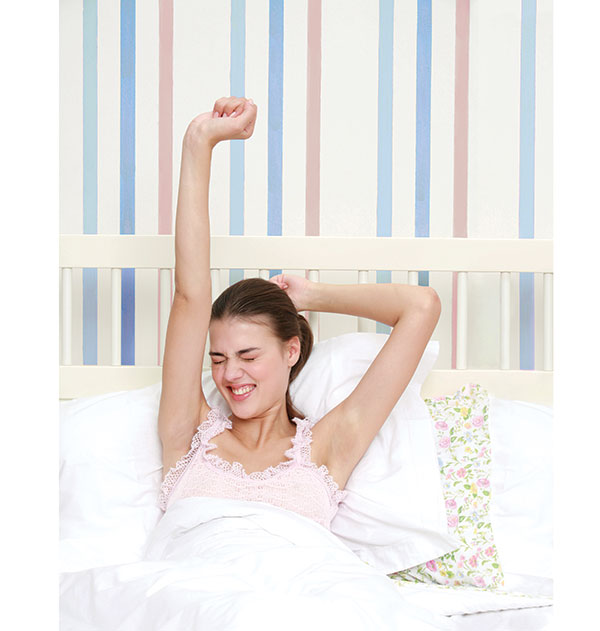 Forget diamonds — the snooze button is the new girl’s best friend. With one in seven Canadians suffering from insomnia and even more saying they can’t seem to get a good night’s rest, tiredness is now reaching epidemic proportions. We already know that lack of sleep puts us in a bad mood and depletes energy, but studies show it can also increase our risk of chronic conditions, like heart disease, obesity, diabetes and cancer.

Dr. Batya Grundland, a family physician at Women’s College Hospital in Toronto, says people complain about fatigue in her clinic every day. First, she figures out what “tiredness” means for each patient, whether it’s sleepiness, mental exhaustion or physical weakness. Then she explores the root cause. It turns out that for many, sleeplessness results from an underlying health issue.

Here are three common disorders that could be disrupting your sleep — and what you can do to get a good night’s rest.

It could be anemia: “I always felt as though I could sleep for 10 hours at a time,” says Julia Seaman, a 36-year-old retail manager from Toronto. But no matter how much she slept, she never felt rested. “I would go to bed at 10 p.m., wake up at 2 p.m., eat something, then nap for two hours.”

Her exhaustion became so overwhelming around her period that she took a sick day almost monthly, just to stay in bed. “I just chalked it up as normal for years,” she says. When Julia finally went to her doctor for help, a slew of tests revealed that she had anemia, a condition that occurs when someone doesn’t have enough healthy red blood cells to carry adequate oxygen to their tissues. The most common symptom is, of course, fatigue.

Up to 13 percent of Canadian women are anemic. It’s a common side effect of menopause. One way to diagnose anemia is by having your red blood cell count, or hemoglobin, tested. Most women should have around 120 g per litre of blood. Julia’s clocked in at just 7 g. “My doctor was surprised I was still standing,” she says.

The fix: Supplements
Often women just need to build their iron stores up with a supplement. “Adjusting diet alone can take too long,” says Ana Lopez, a naturopath with Finlandia Pharmacy and Health Centre in Vancouver.

Pill or liquid supplements are usually very effective (in rare cases, only an injection will do the trick). The cheapest, ferrous sulphate, can cause serious constipation; Lopez prefers ferrous gluconate in pill form. As her patients’ levels get closer to normal, she begins to help them improve their nutrition as well. “The best iron for the body is from animal sources, especially red meat. I often recommend organic beef liver.” She also suggests eating blackstrap molasses, stinging nettle tea (but only if you’re not pregnant) and lots of leafy greens. Vegetarians may have to stay on supplements longer, or permanently.

Supplements helped Julia, but it wasn’t until pregnancy stopped her periods for a while three years ago, halting her loss of blood, that her hemoglobin counts actually hit their proper level. She’s continued taking prenatal vitamins, and sometimes she takes an iron pill near her period for an extra boost. “Looking back, I obviously had anemia for a really long time,” she says. “Now that it’s under control, I can finally rest easy.”

It could be depression: “I felt like I was just dragged down, not able to function, not able to get through the day without a nap,” says Amanda Lee, 44, who works in public relations in Toronto. Amanda was diagnosed with prenatal depression around the birth of her second child six years ago. She started seeing a counsellor and taking antidepressants, which at first boosted her mood and energy.

But last year was especially tough: She left both her marriage and her job. “For ages I would say to my doctor, ‘I’m really tired,’ and she’d say, ‘You have two young children.’ But I’d say, ‘No, like I’m really exhausted.’ One day I slept for 14 hours,” says Amanda.

“People who are depressed generally have problems with sleep, whether it’s too much or too little,” says Dr. Celeste Thirlwell, a neuroscientist at the Centre for Sleep and Chronobiology in Toronto. She asks her patients whether their sleep issues or their depression showed up first, and whether it’s actual sleeplessness that’s bothering them or low energy despite sleeping enough. Worry and stress can keep depressive patients from restful, deep sleep, while low levels of the hormone dopamine can also rob them of energy.

The fix: Healthier habits
“Once we improve sleep hygiene” — habits that contribute to a good sleep, like avoiding naps and going to bed on schedule — “we see where their mood is,” Thirlwell says. Some patients are prescribed sleep medications or antidepressants, but Thirlwell says improving sleep hygiene can often get depression under control. Dopamine-boosting exercise is another natural remedy she recommends.

After advocating for herself with her doctors, Amanda finally got back on track to dreamland. These days, she keeps better sleep habits and goes to hot yoga as often as she can manage. She’s also been to counselling and has visited a psychiatrist who was able to adjust her medication.“Feeling depressed and exhausted while raising small kids was tough,” says Amanda. “But after getting the help I needed, I feel like myself again.”

It could be hypothyroidism: Your thyroid is a tiny gland in your neck that produces the hormones that control metabolism and energy. Hypothyroidism occurs when the thyroid becomes underactive and can’t produce enough essential energy regulators — a problem that affects 20 percent of Canadians, with women over 60 at greatest risk. “When the thyroid is underactive, it slows everything down,” says Grundland. Along with tiredness, symptoms include dry hair, skin and eyes, plus feeling excessively cold. Depression, appetite loss and weight gain could also be related.

Linda Harding, a 69-year-old activity director in Charlottetown, has been dealing with a tricky thyroid since the late 1980s. “A woman with a thyroid condition often cries very easily or shows a lot of anger, while not understanding why she feels the way she does,” she says. “You feel like you could sleep all the time, even when your mind is racing.”

The fix: Hormone therapy
The treatment is surprisingly straight-forward, says Ehud Ur, a professor of medicine at the University of British Columbia. Generally, thyroid replacement is to be taken for life. He usually prescribes Synthroid, a synthetic version of the thyroid hormone thyroxine, to his patients suffering from hypothyroidism. “It’s not a medication, it’s a replacement, and we try to give the exact amount that’s missing.”

That amount can change over a lifetime — patients who experience significant weight gain or loss often need a dosage adjustment, says Ur. (Pregnancy is an especially important time to get rechecked.)

A year ago, feeling tired and moody, Harding suspected that her dosage needed adjusting; she was right. Today, her energy levels are back up where they should be — and she feels better than ever.