After my son was born three years ago, I had a serious bout of what I'll lightly refer to as the baby blues. Still new into my parenting career, I felt very alone, incompetent and struggled often with tears. There were times I felt like I was just barely making it in caring for two small children on my second maternity leave. 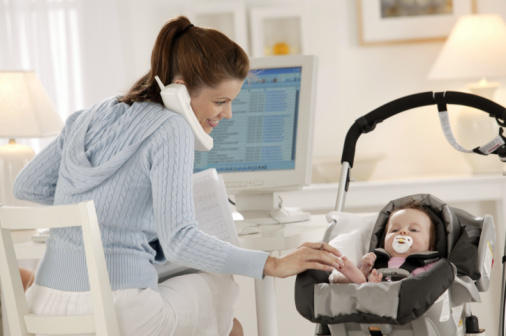 After my son was born three years ago, I had a serious bout of what I’ll lightly refer to as the baby blues. Still new into my parenting career, I felt very alone, incompetent and struggled often with tears. There were times I felt like I was just barely making it in caring for two small children on my second maternity leave. Let’s also not forget that I was generally going on about four hours of sleep per night.

One things that helped drag me out of my deep funk was going back to work. I loved my job as a writer and being one was very much a part of my identity. While I didn’t relish taking my kids to school and daycare during the week—there were tears on both their part and mine in sending them–having the chance to switch gears for awhile and back into my role of writer was a blessing.

So naturally this study about mothers and depression risk caught my eye this week. The study, Depression Risk among Mothers of Young Children: The Role of Employment Preferences, Labor Force Status and Job Quality, commissioned for the US-based Council on Contemporary Families found that mothers in high-quality jobs are less depressed than women in low-quality jobs. Other key findings include that stay-at-home moms who wished they had a job had more depression symptoms, but those who didn’t want a job outside the home didn’t suffer from depressive symptoms. In the end, the researchers concluded that “neither employment nor non-employment is best for all mothers with young children. Instead, mental health depends on mothers’ employment preferences, and if they work for pay, their job quality.”

The results seem so head-smackingly obvious. If you are heavily invested in your career and love what you do, you’ll be blue to be at home with kids while not having the chance to fulfill this other side of yourself.  Or if you have no choice and are working at a job you hated with barely tolerable colleagues, then of course you would want to be at home with your kids. Wouldn’t you?

In the end, when I returned to work, I truly felt like I was a better mom as a working mom. With my children in part-time care, I could still take my non-writing days and plan trips to the zoo or park. I almost felt refreshed coming back into the role of mother once my laptop was turned off. The break to work—which honestly is the easier of my two jobs if you pit writing and parenting head-to-head—allowed me to have much-needed me-time and then come back to parenting with a renewed energy at the end of the day.

What about you? Is being a stay-at-home mother or working mother what you really want? Please share your thoughts.