Everything you need to know about Mifepristone, the 'abortion pill'

A primer on what Mifepristone is and how it works, plus who will be covered under Ontario's new funding plan 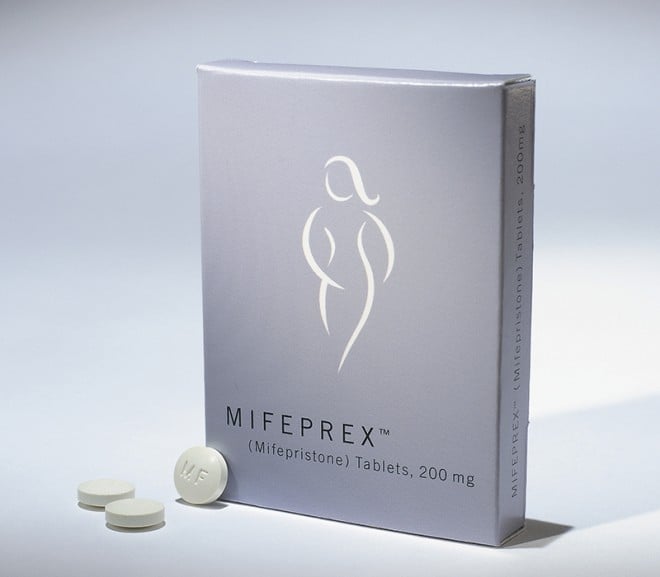 Update, April 28, 2017: Ontario Budget 2017 pledges to expand women’s access to safe abortions “by publicly funding the new abortion pill Mifegymiso (combination mifepristone/misoprostol).” Mifegymiso will be added to the Ontario Drug Benefit Plan, which covers people age 65 and over, as well as people living in long-term or special care homes, people enrolled in Home Care, Ontario Works, Ontario Disability Program, or the Trillium Drug Program. Those not covered by this plan or by a private plan will have to pay out of pocket. The current retail cost of the Mifegymiso package is about $300.

Included among the World Health Organization’s list of “essential medicines,” the combination of mifepristone (also known as RU-486) and misoprostol is used in medical abortions, ending pregnancy in its first trimester. Previously unavailable here, the drug received approval from Health Canada in July 2015. Its brand name will be Mifegymiso.

Mifepristone blocks the production of progesterone, a hormone that prepares the uterine lining for pregnancy. A day or two later, a woman then takes the drug misoprostol, which causes contractions. Together, the drugs essentially induce a miscarriage at home.

A 2012 review of more than 45,000 abortions using mifepristone found that fewer than five percent of women required surgery to complete the abortion and 0.4 percent experienced serious complications. The review, published in the medical journal Contraception, concluded that “[e]arly medical abortion with mifepristone 200 mg followed by misoprostol is highly effective and safe.”

Fewer than four percent of abortions in Canada are performed medically. Currently, women take methotrexate, a chemotherapy drug administered orally or by injection, then follow with misoprostol after five to seven days. In addition to the longer wait time, the drug is less predictable than mifepristone, sometimes requiring several weeks to complete, additional appointments with practitioners and surgery. The WHO does not recommend this method of medical abortion.

This piece was originally published on July 30, 2015 and has been updated.

Related: When it comes to abortion, do medical schools need to smarten up?