What it feels like to live with an incurable bladder disease

Nicole Abi-Najem, a 28-year old student from Toronto, has interstitial cystitis, an extremely painful bladder condition that has been likened to having a permanent urinary tract infection. 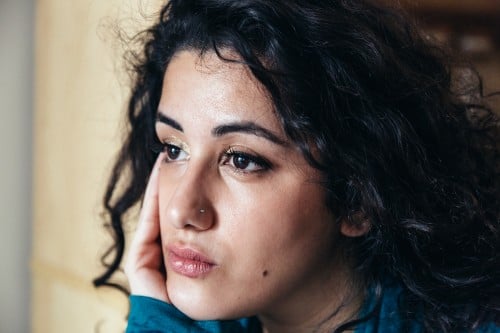 In 2012, I was working out and I went to the bathroom. When I finished peeing, I still felt like I had to go, but I knew that my bladder was empty. Doctors initially thought it was a urinary tract infection, but a test showed there wasn’t any bacteria. They gave me antibiotics, but the feeling didn’t go away. I went to a urologist, and he performed a cystoscopy to examine the inside of my bladder. He saw nothing. With both those tests clear, a specialist at Women’s College Hospital in Toronto eventually concluded that I had interstitial cystitis.

It feels like a never-ending UTI, a migraine of the bladder. It’s an enigmatic condition, but what researchers have ascertained so far is that there are several subtypes, which manifest as excruciating pain, urgency (the feeling of having to urinate) and frequency (actually voiding urine). For some, the only relief from pain comes from voiding, so many sufferers are chained to their toilets, having to pee up to 60 times a day. For me, the symptom is urgency, which is like a tingling, dull feeling in my urethra. I always feel like I have to go, even if I know there’s nothing there. The difference between feeling like urinating and knowing I have to is that I feel a kind of dull pressure with the latter.

I wake up knowing whether the symptoms are going to stay for the day. On a bad day, I can’t do anything. I have to be careful about my intake: Acidic drinks have more of an effect on me. I don’t drink coffee as a general rule, but I’m a master’s student, and sometimes I need it to get through late nights. When I do have it, I have to run to the bathroom. It feels like if I don’t, I’m going to pee my pants. There have been times when I chose not to go out with friends. I’ve stopped doing strenuous workout at the gym like running, which sends me into flare-ups.

Related: How to break the bladder infection cycle

Because IC is such a little-known disease, its diagnosis is based on exclusion, which means, “Let’s factor out what you don’t have.” The wait times to see a specialist in Canada are ridiculous — about one year. Every time I go to [a specialist], they always claim they’re going to be the person to help; that it’s going to be fine. It never is. I’ve tried multiple different overactive bladder medications. I have been given instillations, which is when [doctors] numb the inside of my bladder with lidocaine to provide some relief. I’ve been prescribed Elmiron, a medication used for interstitial cystitis, but I can’t afford it: it’s $400 a month.

This sounds horribly morbid, but I’ve heard people say that, at least with other diseases, there’s an end to the suffering. With IC, there is no end. That’s why the current rate of suicidal thoughts among IC sufferers is about 20 per cent. I’m not going to lie and say I never thought about ending my life when it was at its worst. It’s so funny what suffering will lead you to, the ideas that were in my head. Like, ‘I would do whatever to get rid of this.’ I’ve been referred to psychiatrists and acupuncturists. I even went to a hypnotherapist who did a past-life regression to see if the IC was caused by some trauma from my past life. You’re always willing to fight if you know it’s going to get better, but for many people with IC, there’s no hope.

Related: Why is it so hard for young women to get their tubes tied?

Plus, there’s nothing noble about this disease. Terry Fox ran across Canada and statues have been made of him. We’re not going to have a statue of someone sitting on a toilet. I haven’t told many people. When I do, they [try to] offer solutions right away. “You should do yoga!” or “Stop drinking tap water.” There was a period of about four years where I didn’t have sex, because of the pain. I couldn’t stop peeing, and I was just miserable. Recently, I started again, but it has to be really slow, and it involves taking Tylenol. Now that I’ve let myself do it again, it feels rewarding in a way. Like, this isn’t killing me as much as it did last time. I’ve gotten back into the dating game, too, because I want to experience life again. When I do see guys, it’s not serious. I was dating this low-life, and people were like, “Why are you wasting your time?” I did it because I didn’t have to worry about a future. I didn’t have to worry about disappointing him.

What’s most frustrating is not being taken seriously. Of the estimated six percent of people in North America with IC, 90 per cent are women. So to have my urologist — who is a man — tell me, “There’s no need to be so upset,” as I’m crying in front of him? I don’t put up with that shit. When you go through something like this, it makes you realize who you are at your most basic, biological self. There is pain in my life, in everyone’s life, but I’m making the decision to enjoy as much of it as I can.