Winter got you down? Tips to boost your mood and combat seasonal depression

Empowered patient: Here’s what it’s really like to live with seasonal affective disorder and how to protect yourself from a low-light slump 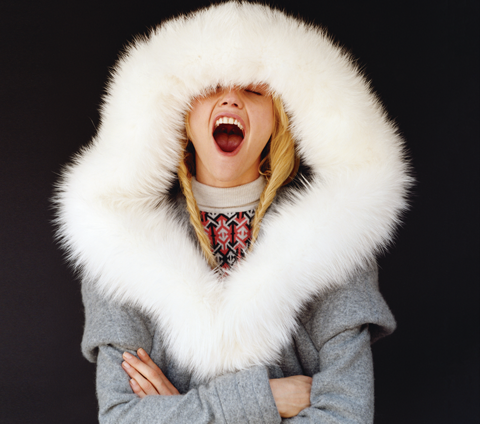 Catch 27-year-old Laura Thomas at the right time, and she’s outgoing, upbeat and cheerful—only “the right time” depends almost entirely on the time of year. From late spring to early fall she has the ideal personality for her job as a retail-store manager. But as the days get shorter, she loses interest in her usual activities and becomes withdrawn, moody and anxious. “It’s almost like being two different people,” she says. “For six months, I’m high-energy and thick-skinned—I don’t let things bother me. But then, November through April, I wear down and everything just seems really tiring.”

Laura struggles with seasonal affective disorder (SAD), a mood condition in which she’s perfectly healthy during the spring and summer but battles debilitating depression during late fall and winter. And she’s not alone: According to the Mood Disorders Association of Ontario, around 17 percent of Canadians will suffer from some form of the condition in their lifetime.

More than the winter blues

It’s common to confuse SAD with a bout of the February blahs, but they’re actually very different. Having the blahs means you’re occasionally bummed about the early sunsets and bone-chilling temperatures. And you might be more into naps and carbs than you would be during the summer, but your general disposition and energy levels don’t change.

SAD symptoms, on the other hand, are more serious and can persist to the point where they affect your work and relationships. Laura first realized there was something wrong in high school. She found that friendships she easily maintained in the spring and summer months would fade away during the fall and winter. At the time, she chalked it up to high-school politics. “There were all these people who I just wasn’t seeing anymore, and it was obvious they didn’t want to spend time with me,” she says. “But I can’t blame them for that because I was basically grumpy and down all the time—and who wants to be around the sad girl, right?” Things didn’t improve when Laura graduated.

“There were days when I just couldn’t get out of bed; I felt so sensitive and fragile,” she says. “It really started interfering with how I lived my life.” For instance, one day last fall, Laura learned she’d have to go into work for a few hours on her day off . “I bawled for hours over something so simple,” she says. “There was this voice in the back of my mind saying, ‘Why are you being so ridiculous? This isn’t a big deal.’ But even a little thing like that can make it seem like the worst day ever.”

While medical experts have known for a long time that changes in the seasons can affect mood, SAD is a newly identified disorder, named only in the 1980s. Laura believes it’s because of this that she had a hard time finding a doctor to take her seriously. When she first tried to get help in university, several doctors just brushed her off. “They were like, ‘Take a vitamin D pill and you’ll be fine.’ It’s very intimidating to tell your doctor, ‘Well, I think there’s more that can be done’ or even ‘I think you’re wrong,’” she says. “I had to switch doctors a few times before finding someone who was really able to help.”

Despite her diffculty getting a diagnosis, Laura is a classic SAD patient. She can easily check off almost all of the risk factors for the condition: She’s female, which makes her up to eight times more likely to have it; she’s between the ages of 15 and 55, lives in a northern country and has a family history of mood disorders.

But why this combination of factors can lead to seasonal depression is still mostly a mystery. One theory is that SAD stems from a vitamin D deficiency. There isn’t a lot of research to support this idea, but one small study did find a link between the two over a decade ago.

And while it’s almost certain that genetics, age and your body’s chemical makeup play a role, researchers are also studying the effects of circadian rhythm, geography, and serotonin and melatonin levels. They’re all related, in one way or another, to light: and specifically, not getting enough of it. A 2006 study conducted by the Canadian Mental Health Association compared incidence rates of SAD around the world and found North America scored the highest, with an estimated rate of up to 10 percent compared with sunnier continents like Europe (between 1.3 and 3 percent) and Asia (1.9 percent).

Dr. Norman Rosenthal, the psychiatrist who first described SAD in the 1980s, firmly believes lack of sunlight is the number-one factor in the development of seasonal depression. “That’s why it usually occurs during the winter, when the days are short and dark,” he says. “But it can hit at other times of year if there’s a week or two of cloudy weather, or if you’re living in a basement and not getting adequate light.”

Once Laura was diagnosed, the next step was figuring out how to make the winter months more bearable. She knew right away that she wanted to go the all-natural route before thinking about antidepressants. Luckily, her new doctor supported her wishes and proposed a treatment plan of vitamins, exercise, diet and lots of sunlight.

That’s the good thing about SAD: While it’s almost impossible to prevent, many successful treatment options exist, says Dr. Raymond Lam, head of clinical neuroscience at the University of British Columbia. “In some ways, it’s just a matter of preference.” Best of all, treatment almost always offers fast relief.

Light therapy: Proven to be a very effective way to treat SAD, light therapy involves regular exposure to bright artificial light. Rays are delivered by special lamps, and you just need to spend a little time sitting or working near one every day. They’re available for about $200 at most pharmacies.

Natural sunlight: Another solution is to simply get more sunlight: Spend some time outdoors every day and create a brighter, sunnier environment, both at home and at work. Move your desk close to a window, trim light-blocking tree branches or install skylights. Lisa Graham, a naturopathic doctor from Portage la Prairie, Man., also recommends ditching your sunglasses. “I have patients who wear shades all the time. They never see the sun. So I get them to read outside without sunglasses for a few minutes every day. It’s surprising how quickly they feel better.”

Antidepressants: For some people, seasonal depression warrants medication. Drugs like Zoloft, Paxil and Prozac are the most often prescribed. For maximum effectiveness, work with your doctor to incorporate them into a comprehensive treatment plan that includes other forms of therapy. Your doctor may also advise you to start taking any medication before symptoms appear.

Lifestyle changes: Add regular exercise to your daily routine. Walking, yoga and swimming are all low-impact choices that can deliver moodenhancing benefits. And consider taking vitamin D and B supplements.

Meditation: Meditation is a great stress reliever, and stress can contribute to symptoms of SAD, says Rosenthal. “Light therapy is still usually the primary treatment, but I’ve been interested in meditation as an ancillary treatment. Both boost your biology , and meditation reduces stress. It’s a good combination.” Try making time for a short meditation session as soon as you wake up to get your day off to a positive start.

Cognitive behavioural therapy: Offered by psychologists or counsellors, this form of talk therapy helps you understand the thoughts and emotions that could be a result of the condition.

Clinical trials are currently underway to explore different methods of treatment, like better light therapy, and the effectiveness of vitamin D supplements. Meanwhile, a recent study looking for genetic markers for SAD bodes well for faster diagnosis in the future. But for Laura, finally understanding the reason for her mood swings has made the most difference.

“Knowing has helped me make the periods of depression shorter and less frequent,” she says. “Being able to recognize that it’s not just a slew of bad days, and that I do have strategies to make it better— like making an extra effort to get outside or talking about what’s bothering me with my boyfriend—has really improved my life.” Are you sad?

Four ways to beat that bad mood
Everyone could use a quick pick-me-up when clouds are in the forecast. Try these easy ways to brighten up your day

1. Eat right: What you eat may affect your levels of moodenhancing serotonin. Opt for foods that are rich in vitamin B6 (such as bananas, spinach, chicken and fish). And don’t skip the mood-boosting benefits of complex carbs, such as whole grains.

2. Sleep well: A study in Sleep Medicine Reviews linked a good night’s sleep to better moods. To help you get a full night’s rest, make quiet decompression time part of your bedtime routine.

4. Fake it: If all else fails, pretend to be in a better mood. Studies show that smiling, even if you just aren’t feeling it, can actually lead to the real thing. And a good belly laugh is even better!