Eight nail issues that could be a sign of something serious

From white spots to vertical ridges, find out the health issues that may be making themselves known via your nails. 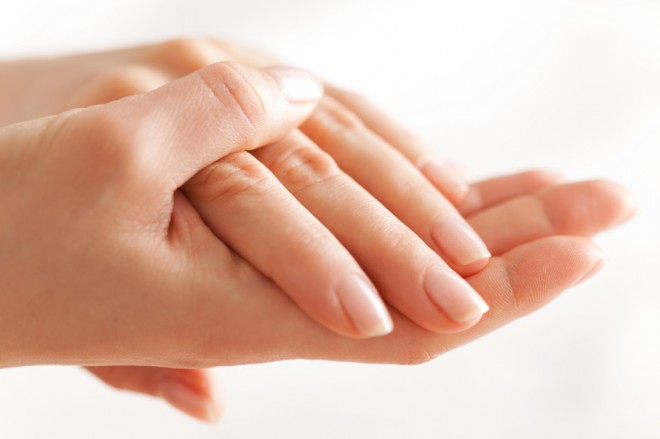 Canadian women love to adorn their fingernails with brightly hued polishes and stunning manicure art, but some important health clues might be lurking underneath. Your nails can often flag the first signs of an illness. Here are eight health mysteries that your nails can reveal.

1. Yellow nails
According to Dr. Julia Carroll, a Toronto dermatologist and director of Compass Dermatology, a tawny hue that’s accompanied by thick, slow nail growth could signal a respiratory illness such as bronchitis, or lymphedema, a condition characterized by decreased fluid drainage from the body’s lymphatic system. If you have additional bronchitis symptoms such as comprised breathing, or are experiencing swelling of one of your arms or legs – a common sign of lymphedema – book an appointment with your physician for diagnosis, and treatment.

Less serious problems can also cause yellowing. “You might see yellow nails with fungal infections, or the overuse of nail polish,” says Dr. Carroll. Nail fungus won’t disappear on its own, so see your doctor for a prescription that will kill the fungus and prevent it from spreading to other nails. If continual use of nail polish is to blame for your nails’ discolouration, you’ll have to take a break from your manicure addiction. “If you let your nails rest in between polish applications it usually helps,” says Dr. Carroll. Since this type of staining is solely on the nail surface, buffing the nails will also help expedite its disappearance.

2. Pitting
Small pits or dents in the nail can hint at several conditions. Trauma to the nail, alopecia areata (hair loss), psoriasis, and Reiter’s syndrome (a rare autoimmune condition that’s also known as Reactive Arthritis) can leave small pockmarks in the nails’ surface. Depending on the ailment, your physician or dermatologist can help treat the underlying condition that’s causing the nail issues.

3. Red or brown vertical lines under the nail
Dark marks under the nail can be a sign of acral lentiginous melanoma (ALM), a potentially fatal form of skin cancer. “Singer Bob Marley died of melanoma under his toe nail. It’s important for people to know that cancer can happen anywhere,” says Dr. Carroll. Brown vertical lines can also be diagnosed as splinter hemorrhages — streaks of blood that can point to a heart valve infection. ALM and heart valve infections both require a physician’s attention, so it’s imperative to see your doctor if you discover dark marks under your nails.

But not all dark lines are dangerous. If your nail has been injured, thin vertical bloodlines can appear, but they’ll vanish as the nail grows out.

4. Nail separation from the finger
If your fingernail lifts away from the tip or sides of the nail bed, you might have a condition called onycholysis. Psoriasis or fungal infections are responsible for this painless situation. A separation between the nail and the finger can also be Plummer’s nail. Named after Dr. Henry Stanley Plummer, an endocrinologist who dealt with thyroid disorders, Plummer’s nail is a symptom of hyperthyroidism (an overactive thyroid gland that causes sudden weight loss, rapid heartbeat and fatigue).

5. Spoon-shaped nails
Fingernails that resemble the concave shape of a spoon, and tilt away from the finger, could be due to an underactive thyroid (hypothyroidism). If left untreated, hypothyroidism can lead to heart problems, obesity and infertility. Heart disease, an iron deficiency or hemochromatosis (a liver condition caused by too much iron in the body) can also be at fault.

6. Indented lines running across the nails
Called Beau’s lines, these horizontal dents can be related to diabetes, peripheral vascular disease (narrowing of the blood vessels), or a recent illness such as scarlet fever, the mumps or pneumonia. “[When you have] any systemic illness, your body will stop caring about things that don’t matter for survival, so your hair and nails are always the first to suffer,” says Dr. Carroll.

A blow to the nail can also cause these lines to form, but in time they will grow out with the nail. If the lines re-appear, a check-up with your doctor can rule out something more serious.

8. Clubbing
Place your two index fingers together at the nail and see if there’s a small space between them. If you can’t peer through a small space, you probably have nail clubbing (Click here for a visual). Heart, lung or liver issues can result in this area of the cuticle taking on a swollen appearance.