Trapped in my own body 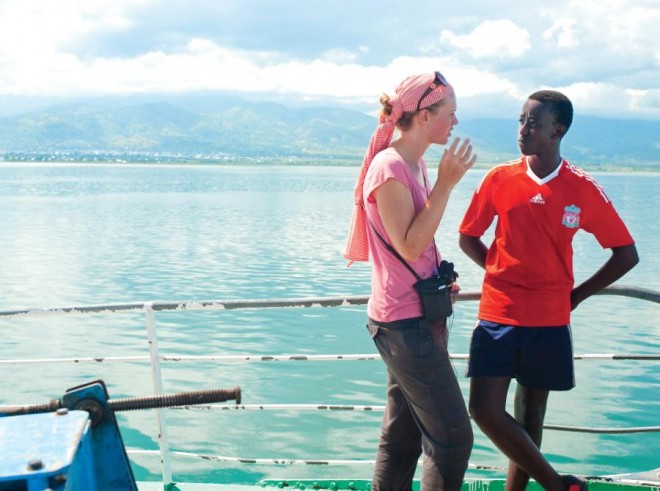 In the split second after waking up from the car crash that nearly stole my life, I knew that things would never be the same. I had gotten into my car with my friend Sophie, exhausted, after working. The next thing I remember is waking up in intensive care, imprisoned in my body. I was able to hear voices around me, but unable to speak to anyone or let them know I was there. I was 25.

It was terrifying. I didn’t know what had happened. I didn’t know where I was, or how much trouble I was in. I couldn’t get through the coffin of concrete that was my broken body. I could feel a brace around my neck, but I couldn’t ask if I was paralyzed. I had tubes down my throat and a nurse by my side, regularly removing excess saliva from my mouth. My eyes wouldn’t open. I couldn’t get through. Interestingly, I wasn’t alone “inside” — I knew God was there with me. But I was completely isolated from life. I wondered if this was it for me.

Eventually, I was told what had happened. We had collided with an oncoming car, but, thankfully, no one was killed. Sophie had badly damaged her eye but was stable. The other driver was alone and unhurt. My injuries were extensive. I wasn’t paralyzed, but my liver had effectively exploded. I was taken to the OR for emergency surgery, and a nurse warned my waiting family that I might not survive another half-hour. My lungs were punctured; my hips were smashed, as were my ribs, collarbone, pubis, cheekbone and jaw. My face had been badly torn through on the left side, and the doctors thought I had nerve damage. My arms and hands wouldn’t move properly, and my legs and feet were mangled. I would discover when the incubation tube was removed that my vocal cords had been paralyzed as well.

The view from the hospital bed is an interesting one. Everything is very simple.

There’s no escape from it — you are where you are. Damaged. Waiting. Without guarantees. You live a lot through other people’s eyes. Are they horrified, are they scared, are they confident it will be okay? Will they help you? Do they love you? I had never been vulnerable in that way before, and I was afraid of the answers.

The biggest irony is that I don’t think I knew that I was truly loved until my face was hanging off and I couldn’t move or speak. It sounds a little corny, but the discovery that I was loved, even when I was seemingly at my most unlovable, was the most empowering thing I have ever experienced. Two weeks and a day before the accident, I’d met a musician called Bernie. We were supposed to be going on a date on the evening of my accident, and one of the first questions I asked when I was given a pen to scrawl words was, “Does Bernie know?” He could easily have walked out of my life as quickly as he had come into it. Instead, Bernie first visited me six days after the accident — a nurse had to point me out, because my face was unrecognizable. He travelled every week to see me, and we kissed for the first time as I lay in bed.

I always thought I had to prove myself, and was terrified of failing. I thought if I looked good or kept people entertained or achieved significance, it would somehow validate me. So it was humbling and precious to realize that when I had literally nothing to offer, I was loved. It set me free. For those first eight weeks in the hospital, not a day went by without a visit from a friend or relative.

I was in traction for 10 weeks, and after the hospital came at least two months of physio, some big disappointments, a lot of prayers and even a miracle or two: I could walk. I didn’t have nerve damage. And the scar on my face has faded every year for the past six years.

Just nine months after I nearly lost my life, Bernie and I went to Malawi. He took me to a market at dusk, and as I looked around I saw dozens of signs tied by the same neon-pink string to stalls. Each one had written on it: “Debs, one question.” I had no hesitation in saying yes to Bernie, and a year to the day after my accident, we walked down the aisle.

Up until the accident, my dream had been to make films, but deep down I did not really believe I could do it. I had written and directed a short film and worked in TV, but I wasn’t any closer to where I wanted to be in my career. Ambition was leading me to work on projects I didn’t believe in. In following my dream, I was getting farther and farther away from it. There were other lessons too. During the long, sleepless nights when I was trapped inside myself, I realized that the legacy of any life is in the people it touches, not the kind of parties and adventures that my pre-crash life had been filled with.

The accident gave me the focus and determination to make my own film. Now, at 31, I have just directed my first full-length feature, Africa United, which tells the uplifting story of a group of Rwandan children journeying through Africa to reach the World Cup. Crazily ambitious, a road movie with kids travelling through seven African countries, Africa United premiered at the Toronto International Film Festival to a standing ovation. It was even tipped as the next Slumdog Millionaire!

Of course, I still get scared sometimes that I’ll screw it up or miss the point. But I’m no longer afraid of losing everything, of failing to live my dreams. If I’m loved and love, it’s not possible to fail. Legacy is not written in achievements or accolades, it’s written in those we love. That’s all we take with us, and all we leave behind. We are not alone, and faith and friendship are the ultimate “why not?” They can power anything.